AT&T is closing in on a deal to acquire You.i TV, a Canada-based company that specializes in software that powers apps and user interfaces for a wide range of mobile and TV-connected viewing devices, according to people familiar with the situation.

Financial terms were not immediately known, but AT&T's acquisition of You.i TV, which is still being finalized but expected to close later this month, has been announced internally, sources said. You.i TV and WarnerMedia, the media division of AT&T, declined to comment. 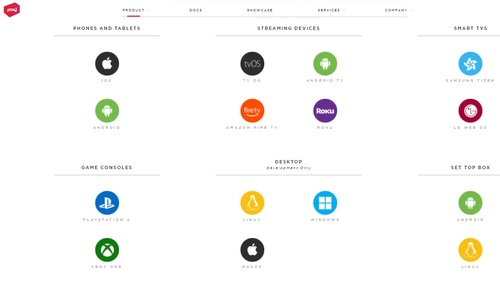 This chart offers a sense of the various platforms that You.i TV's engine can support from a single codebase. Click here for a larger version of this chart.
(Image source: You.i TV)

You.i TV should provide a strategic technology fit at AT&T and its WarnerMedia unit as streaming and other direct-to-consumer video services that can be delivered to both retail and operator-supplied devices become increasingly core to AT&T's distribution and media businesses.

AT&T/WarnerMedia already a customer and investor

AT&T and WarnerMedia are already well acquainted with You.i TV. Time Warner (now part of WarnerMedia) was an early investor in You.i TV, and several AT&T/WarnerMedia-owned services and media properties already use You.i TV's technology, including Turner and DirecTV. Additionally, Jason Press, EVP of direct-to-consumer technology and program management at WarnerMedia (and a former Comcast exec), was appointed to You.i TV's board about a year ago.

You.i TV, a company founded in 2007 that now has more than 200 employees, has raised about $38.1 million, according to Crunchbase. Sky, now part of Comcast, is also a You.i TV investor.

Privately held You.i TV doesn't disclose financials, but the company was on tap to achieve a $38 million annual run rate of revenue by Q4 2019, according to Needham & Company. Based on You.i TV's growth prospects, Needham & Company also estimated at the time that the video software company was poised to generate more than $150 million in revenues by the end of 2021.

When the deal comes to pass, it will effectively bring some critical technology in-house as AT&T and WarnerMedia broaden their streaming horizons and continue to build out and deploy direct-to-consumer premium video products. In some respects, the acquisition is strategically similar to what drove Comcast's acquisition of Metrological last fall.

You.i TV has also had some success outside the AT&T/WarnerMedia universe, having worked with a number of pro sports teams in the NBA, NFL and with Major League Baseball, as well as A+E Networks and Australia's Network 10.

It was not immediately clear if You.i TV will continue to pursue deals outside the AT&T/WarnerMedia universe once the deal is done or if it will go strictly in-house and essentially mirror the approach that Disney took after snapping up a majority stake in BAM Tech some three years ago.