Adara Technologies has introduced a streaming TV platform that, it claims, can provide tier 2/3 operators with an alternative to MobiTV, the pay-TV tech company whose future is uncertain after filing for voluntary Chapter 11 bankruptcy earlier this week.

Adara, a supplier that has also developed a video switching platform that helps its base of independent operators reclaim bandwidth for broadband and other services, is also out in the market with an app- and IP-based video platform called "myCatapulTVe." 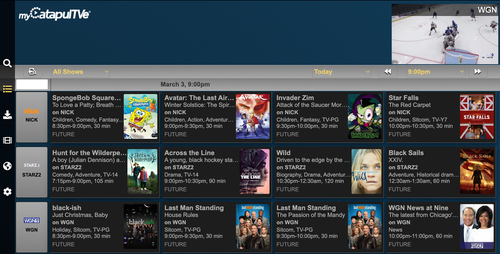 Adara's customizable guide for connected TV and mobile devices leaves real estate for promotions and ads that, it says, can help to expand pay-TV service margins

The genesis of that product goes back about five years, when it started out as a Slingbox-like local transcoding device that hooks into legacy QAM-based set-tops to deliver IP video inside and outside the home. Adara developed the interfaces for that original product and has since applied it to myCatapulTVe.

But rather than retrofitting IP to a QAM set-top box, Adara's new myCatapulTVe platform runs on servers and transcoders that hook into the video sources at the cable operator's headend. It also runs on apps for a wide range of newer TV streaming devices from the likes of Amazon (Fire TV) and Android TV, as well as on web browsers and mobile devices, which can also cast content to supported connected TVs. In addition, Adara has options for operators to add a cloud DVR and TV "startover" services. 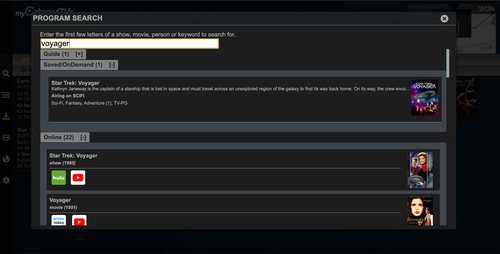 Adara's platform also features search function that can find content from the pay-TV provider as well as OTT video services.

Adara's guide for myCatapulTVe, which can search across the traditional pay-TV service and various OTT services, can also be customized to the operator. Plus, it leaves some real estate at the top for local or national advertising or promotions from the operator, explained Mark Guerrazzi, VP of sales and business development at Adara.

Adara's on-premises deployment model is a bit different than MobiTV's , which relies more heavily on a multi-tenant headend for its various pay-TV partners. Adara also sources video for its platform from the cable operator and doesn't strike programming deals on its own. MobiTV's model has tied together its own carriage deals with certain national cable channels, adding in local broadcast channels for which the partner has rights. MobiTV, according to industry sources, also required little to no upfront costs and no contract minimums, decisions that evidently rendered its business model unsustainable.

Guerrazzi, an exec late of Cisco and Scientific-Atlanta, said Adara also offers some flexible options in which the partner purchases the equipment, such as the transcoding and cloud storage, alongside an ongoing per-subscriber fee to deliver and manage the service. Or they can pay a larger per-subscriber fee with a lower one-time cost.

Adara, Guerrazzi added, has already gone through integrations with the major billing systems via its legacy QAM-focused business and has applied those hooks into the new myCatapulTVe product.

Adara has not announced any deployments for myCatapulTVe, but a half dozen or so are in the process of launching, Guerrazzi said. In addition to using myCatapulTVe as a new pay-TV platform, some are looking to use it to upgrade their QAM-based VoD systems to IP, he added.

He said most of the operators Adara has engaged with on existing legacy QAM video platforms have looked at or considered MobiTV, but noted that one tier 2 that was going with MobiTV is taking a closer look at myCatapulTVe.

Adara didn't participate in the original RFP that the National Cable Television Cooperative oversaw and resulted in the 2017 agreement with MobiTV. But Guerrazzi said the company is reaching out to the organization to provide more detail on Adara's alternative as MobiTV wends through a restructuring process that could result in a sale of assets.