New Orleans -- SCTE/ISBE Cable-Tec Expo -- Now that the dust has settled and the hangovers have subsided following another Cable-Tec Expo -- likely the last one to be held in The Big Easy for a good long while -- it's time to take a look back at some of the highlights and takeaways from last week's event.

As many showgoers told me privately, the "cable" industry has changed -- for better or worse -- amid this era of consolidation and the desire and necessity to drive scale into every aspect of the business.

While there's still need for engineering leadership and innovation as well as industry-specific products and technologies, that need is becoming less pronounced as network technologies and techniques head toward virtualization and, in general, start to take on attributes and share connective tissue with those of the telcos and mobile and wireless network operators.

But alongside this inexorable change, this year's event still served up plenty of fresh ideas that are being explored along with some important updates on some critical work that's underway. Here's a sampling of what we learned last week:

10G is the industry's next network reality
As this show's focus, the cable industry fixated on its efforts around 10G, an initiative aimed at delivering symmetrical speeds of 10 Gbit/s alongside other advanced features like low latency.

Michael Powell, president and CEO of the NCTAThe Internet & Television Association, teased the 10G term at last year's Cable-Tec Expo in Atlanta, and discussed how the 10G story is being portrayed in Washington, DC, during this year's opening general session.

'10G' signage was ever-present at this year's Cable-Tec Expo.

"In many ways, it really is our battle flag," he said of 10G in a discussion on stage with me. "It is the stake we put in the ground to rally around and to demonstrate our rightful place on the cutting edge of the future of this country's information ambitions."

He also downplayed concerns about market confusion between 10G and 5G, noting that 10G networks will be needed to underpin 5G services. Going with the 10G moniker was done on purpose to "invite the comparison to 5G," Powell said.

The reality is that 10G represents the long-term future direction, and that the focus is not just on HFC networks, but also fiber-to-the-premises and wireless networks that MSOs will be deploying. Meanwhile a big unknown is what apps and services will require 10G and when those capabilities will be needed. (See When will cable need 10G? )

"I don't think there's one silver bullet on why 10G is needed," Bob Ferreira, general manager of Intel's Connected Home Division, said later in the general session. "We'll play a role in helping to bring 10G to life."

But there seems to be little doubt that 10G networks will be critical down the road as there's a feeling of eventuality that services requiring those speeds will surface just they did in every prior step-up in the capacity of the cable access network.

"We create the bandwidth and customers use it," Tony Werner, president, technology, product, Xperience at Comcast Cable, said in his discussion with Ferreira.

Meanwhile, cable's already on the cusp of reaching an important milestone with its widely deployed DOCSIS 3.1-based networks.

In 2020, Comcast plans to introduce symmetrical 1 Gbit/s symmetrical services with its current DOCSIS 3.1 platform, Werner said later in the session, noting that a new wave of bandwidth-heavy display technologies, such as holographic displays and lightfield displays, are on the near-term horizon. "I think it's going to be reality, and I think it's meaningful." (See Cable Gets Behind Emerging Holodeck Tech .)

HFC's got more gas in the tank
The 10G story also has linkages to DOCSIS 4.0. That specification, now under development at CableLabs, will support both Full Duplex DOCSIS (FDX), a technique primarily favored by Comcast that allows upstream and downstream traffic to run in the same block of spectrum, and Extended Spectrum DOCSIS (ESD), a technique that will enable the bandwidth ceiling to be raised to 1.8GHz (versus 1.2GHz with DOCSIS 3.1) and continue to keep the upstream and downstream traffic separate.

After some earlier FDX vs. ESD debate, the cable industry has ultimately decided that both technologies can coexist under the DOCSIS 4.0 umbrella.

"There's more than one way of doing 10G," Comcast's Werner said during an Innovation Theater session on the 10G topic. "Many roads lead to Rome, and we'll all get there."

While DOCSIS 4.0 will prolong the need for most cable operators to upgrade HFC networks to FTTP, other activities underway could stretch that road out even further. During a keynote at a Light Reading-sponsored breakfast session, Cox Communications Executive director of Advanced Technology Jeff Finkelstein said CableLabs is already looking at ways to future-proof the HFC network by supporting 3GHz spectrum, and is also exploring a 6GHz HFC network.

"DOCSIS's demise has been reported for 20 years," Finkelstein said. "We have a long way to go."

"HFC has lots of gas left in the tank," a CableLabs exec involved with those efforts said on the sidelines at another session.

Intel working on an 'FDX-L' cable modem
As part of its work centered on DOCSIS 4.0, Intel is working on a cable modem that allows legacy DOCSIS 3.1 modems to participate in FDX-based operations.

That "FDX-L" cable modem (with the "L" evidently standing for "legacy") will target several use cases, including coexistence with future networks that use an FDX band that supports both upstream and downstream traffic.

With new firmware, an FDX-L DOCSIS 3.1 modem will be able to share the same channel with an FDX modem in an FDX band without causing interference, said Shaul Shulman, senior architect of strategy with the planning and technology office at Intel's Connected Home Division, while presenting a whitepaper focused on techniques being explored to ensure that legacy DOCSIS cable modems won't have to be abandoned as FDX is deployed.

Comcast is pushing ahead with network virtualization
As cable operators begin to pursue the 10G capacity goal, some are already plotting out access networks that will be increasingly distributed and virtualized.

Comcast appears to be well ahead in this area as the company offered a well-rounded update on its virtualization efforts.

It has become "critical" to transform the way Comcast operates the network, Jan Hofmeyr, EVP and chief network officer at Comcast, said in a session entitled "Building a 10G Network." "The complexity is increasing as we are scaling."

Comcast is tackling that challenge in part with a software-based, containerized "virtual" cable modem termination system paired with the deployment of remote PHY nodes that push key electronics toward the edge of the network.

"A virtual network can guide the capacity where the capacity is needed and that changes during different times of the day," Elad Nafshi, SVP, next-generation access network at Comcast, said. 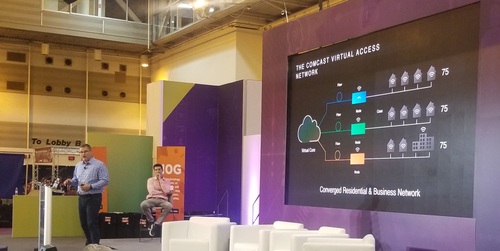 Among other benefits, that work is also reducing rack equipment and cutting down power requirements. Meanwhile, the addition of more real-time telemetry data from the virtualized network is reducing the mean time to detect network issues from 30 minutes to about 15 seconds. "This truly is a completely new ecosystem and approach," Nafshi said.

Light Reading will have much more about Comcast's network virtualization project in a future story.

'GAP' is making progress
Skepticism was rampant last year about the Generic Access Platform (GAP), an SCTE/ISBE project that aims to standardize node housings that allow various modules -- for WiFi, 5G, CBRS and new DOCSIS capabilities -- to be snapped in like Lego bricks. 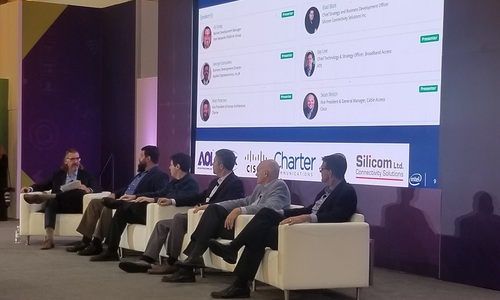 Some of that skepticism remained this year about how widely GAP will be adopted by vendors and cable operators, but it was also clear that much progress is being made in the form of a functioning proof-of-concept GAP node.

While Charter Communications is the primary MSO champion of the GAP project, the prototype involved the handiwork of five suppliers, which all contributed a piece to the puzzle: ATX Networks (the GAP housing with DOCSIS 4.0 capabilities for a 1.8GHz cable network); Cisco Systems (software for a virtual converged cable access platform); Intel (compute); Applied Optoelectronics (the remote PHY device); and Silicom Connectivity Solutions (an Intel Xeon-D-based main board and midplane for FPGA modules). (See Can cable bridge the 'GAP'? )

While about two dozen companies are involved in the GAP working group, there's still a clear need for more suppliers and MSOs to get beyond the "wait-and-see" phase and step up as efforts continue on an initial GAP standard that's expected to be completed around Q1 2020.

MSOs must take proactive role in smart city talks
As cities look to smarten up their infrastructure in areas such as street lighting, connected cameras and monitored parking lots, cable operators should be taking a more proactive role in those discussions with local leaders, Liberty Global's Bill Warga and Charter Communications' Tom Adams said during a panel last week with me.

Cable operators already have the wired networks, along with aggressive plans to complement that with mobile and wireless capabilities, that can underpin any smart city initiative, Adams said. 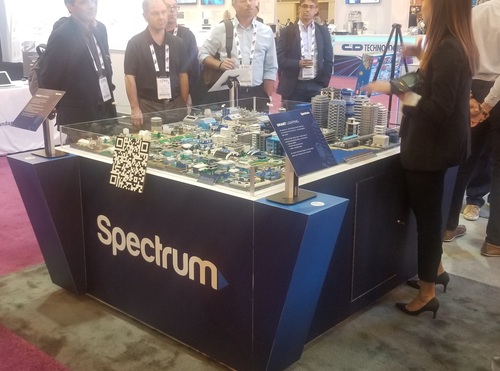 Charter's Lego smart city is comprised of more than 50,000 pieces from 20 countries, 75 feet of wiring and took 541 man-hours to build.

The effort to celebrate and recognize this group's work and contributions was instigated by two other members of the Cable TV Pioneers -- Rouzbeh "Father of the Cable Modem" Yassini, and cable industry vet and former Comcast CTO David Fellows.

You can see the full list of the inaugural class of DOCSIS pioneers below, but, on a personal level, a wonderful and heartwarming surprise (and one that choked me up more than a bit) was the inclusion of the late Roger Brown, the former editor-in-chief of CED magazine and a close friend and mentor of mine who died in 2005 following a valiant fight against cancer. 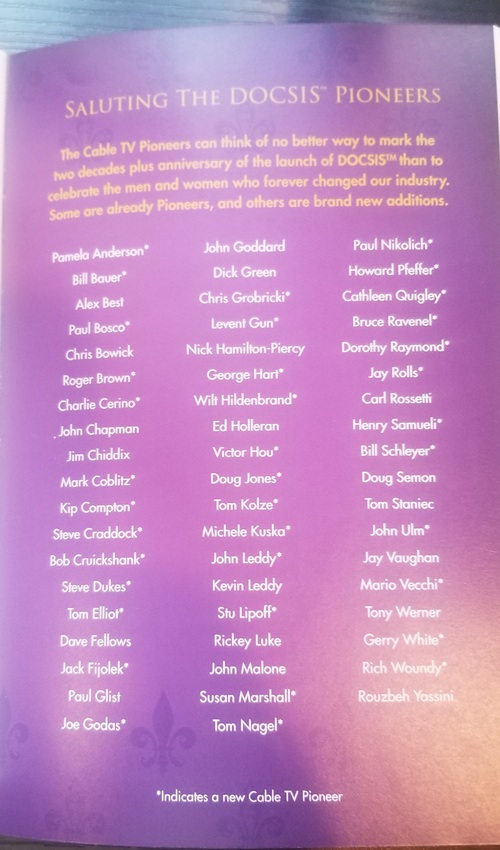 Another great surprise was to see another friend, Tony Brown, who is Roger's oldest son and now chief of staff at Newsy, on hand to witness the honor bestowed upon his dad and others who were recognized for their work and involvement on one of the industry's most important (and ongoing) technological achievements.

"These are individuals who, as of tonight, are recognized as Cable TV Pioneers for their work in and around the development of a vital technology," Stewart Schley, a long-time industry writer, keen observer and self-described "recovering trade journalist," said in remarks presenting the inaugural class. "Today as you know, DOCSIS is the underpinning for multi-trillion dollar industry valuations, hundreds of billions of dollars of revenue and a stupendous transformation of the global telecom industry."

For a snapshot on now DOCSIS got from there to here, please see: The Road to DOCSIS 4.0.

To read more coverage from Cable-Tec Expo 2019, please check out: