Five Signs That the US Cable Industry Is Fracturing

As 2019 gets underway, it's clear that the US cable industry looks nothing like it did even a decade ago. It's not nearly as collaborative and collegial as it once was.

We're not here to judge if that's a good or bad thing, but this latest (and ongoing) wave of industry consolidation has forever changed the cable landscape. Comcast designs a lot of its own products and has become an industry services company in part through its X1 syndication program. The Cable Show is no more. Cable One Inc. has practically forsaken pay-TV in favor of its higher-margin broadband business. (See Cable One Gets Credit for Putting Pipes Ahead of Programming.)

Things just aren't the same. Hey, that's business. You change or you die. I mean, hell, even Yoda agrees with me! Or at least this meme with Yoda on it agrees with me. And I don't argue with memes! 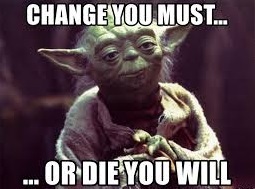 Still, the reality check is that cable's tightknit friendships, alliances and joint ventures aren't all on the verge of completely unraveling tomorrow.

After all, the Society of Cable Telecommunications Engineers (SCTE) and CableLabs still play significant roles in the technology direction of the industry, the NCTA  The Internet & Television Association and American Cable Association (ACA) are still helping to lead the regulatory path for their constituents, and partnerships and joint ventures like Canoe, the Comcast Corp. (Nasdaq: CMCSA, CMCSK)-Charter Communications Inc. mobile operations JV, are still intact. (See Comcast, Charter Launch Mobile Platform Partnership.)

But there has been some fraying around the edges, indications that the chummy US cable industry has become decidedly less collegiate and friendly as business strategies diverge and the industry -- from service providers down to their major suppliers -- continues to consolidate, and scale becomes the name of the game.

What follows is a representative list of five of those signs that I've observed:

But the essence of that unwritten agreement has been fading, with a prime example being Comcast's recent moves to edge out and pursue franchises in adjacent areas that are already the turf of other MSOs. It's not something that's running rampant, but it's happening, and it's rankling some of cable's old guard.

Multichannel News has an excellent in-depth story about this, centering on recent moves by Comcast to broaden its borders to reach more business and residential customers that have historically been the domain of small mom and pop cable ops. While Comcast, which hasn't made similar actions into territories controlled by major MSOs such as Charter, views these relatively small overbuilding moves is as a way to better serve large enterprise clients in adjacent markets, others see it as a "cultural shift and the first hairline crack in the cable industry," Mike Farrell writes.

Former Buford Media CEO Ben Hooks put it this way to MCN: "When I started in this business, we all helped each other... You don't see that, especially with Comcast. As far as they're concerned, there's them and there's the rest of the industry." Ouch!

CableLabs sues Buckeye Broadband
Last month, CableLabs filed a lawsuit against Buckeye Broadband, suing the Ohio-based operator over allegations that Buckeye is delinquent in paying its dues to the Colorado-based cable R&D organization. Buckeye notified CableLabs in January 2018 that it wanted to pull its membership, but CableLabs notes that the subscription agreement stipulates that Buckeye remains a paying member for three years after notifying CableLabs of its intentions to depart. (See CableLabs Sues Buckeye Over Delinquent Dues.)

There's a couple ways to look at this. Perhaps Buckeye no longer feels it's getting the value out of its membership and feels that money would be better spent elsewhere, and took a chance that CableLabs would just let non-payment slide. On the other end, CableLabs has a right to defend against alleged breaches of the agreement. However, the lawsuit could also be viewed as a deterrent, setting of an example in case any other members might be entertaining similar thoughts. In any case, it's an unusual and surprising battle that, I think, speaks volumes about the state of the US cable industry.

Diverging next-gen network strategies
While there were always nuances in some of the specific tactics, most cable operators have been in lock-step on the evolution of the HFC network from the early days of DOCSIS 1.0, to 1.1, 2.0, 3.0 and, in most cases, with DOCSIS 3.1.

After being on a similar path for years, cable ops are at a crossroads about what to do next on those HFC networks  deploy Full Duplex DOCSIS, an annex to D3.1 that enables multi-gig symmetric speeds; look at the alternative work around extended spectrum DOCSIS; or just take fiber-to-the-premises. (See Full-Duplex DOCSIS Not One-Size-Fits-All and Arris CTO: What's next for DOCSIS?)

Comcast appears to be the big champion of FDX, which requires an N+0 architecture (no amps between the node and the home) as fiber is pulled deeper, while others are not nearly as enthusiastic, viewing N+0 as a deal-breaker and causing them to seek out alternatives. Altice USA, meanwhile, is moving aggressively with FTTP upgrades. (See Altice USA Lights Up FTTH Service in Long Island.)

And with respect to distributed access architectures, there's some different schools of thought with remote PHY and remote MACPHY. Meanwhile, Charter Communications is the heavy behind GAP (Generic Access Platform), an SCTE standard in the works that will commoditize the node and provide a uniform way for modules to be snapped into place. It's a novel idea, but a controversial one that doesn't have complete buy-in and has been met with much skepticism (Light Reading will have a lot more on this topic soon). (See Using a Lego Approach to Cable Node Upgrades .)

Those disparate views could affect vendor roadmaps and cause them to make hard decisions on where to invest. And if one major cable operator zigs, while everyone else zags, is that cable operator big enough to make a market?