Almost six months after wrapping its $7.4 billion acquisition of Arris, CommScope said it will trot out its latest next-gen cable networking and DOCSIS enhancements at next week's SCTE/ISBE Cable-Tec Expo in New Orleans.

Part of this new wave will focus on "10G" products that target symmetrical 10 Gbit/s capabilities on multiple access network types (HFC, FTTP and wireless), Kevin Keefe, CommScope's recently appointed SVP and segment leader for its Network & Cloud unit, explained in a recent briefing. CommScope will also zero in on new DOCSIS-facing capacities that enable operators to extend their spectrum and vastly reduce the latency of the HFC network.

Following a demo first shown at Anga Com in Germany, CommScope will offer an update on a software-configurable Extended Spectrum DOCSIS (ESD) capability that enables operators to adjust the upstream and downstream spectrum split on the HFC network without having to touch equipment in the field manually.

That development, which combines ESD with a software-driven Frequency Division Duplex (FDD) function, is expected to weave into DOCSIS 4.0, a new set of specifications underway at CableLabs that will set a path for cable operators to raise their spectrum ceiling beyond today's limit of 1.2 GHz and widen or contract the amount of capacity that is dedicated to upstream and downstream traffic.

"We think this [new technology] is clearly in line in that direction, and will be compatible with [DOCSIS 4.0]," Todd Kessler, SVP of product management for Network & Cloud at CommScope, said.

He noted that CommScope's efforts in this area, which aim to reduce the operational intensity required for changes to cable network upstream/downstream spectrum splits, are still in the tech-demo stage. "We think the industry is going in this direction."

CommScope is also taking aim at low-latency capabilities with a new DOCSIS timing protocol that could support HFC-based mobile backhaul and, possibly, apps and services such as virtual reality and autonomous vehicle control.

CommScope said it's enabling this by adding embedded timing guarantees that improve the synchronization of data flowing between its network-side E6000 Converged Cable Access Platform (CCAP) and at the consumer premises equipment (CPE) layer.

The designed benefit here is to have the DOCSIS network carry embedded timing that is precise enough to support a multitude of use cases, Chris Busch, engineering fellow in the office of the CTO at CommScope, said. If this low-latency approach is successful, this could enable DOCSIS to rise to "first-class citizen" status for 4G cell backhaul today and, later, 5G backhaul, he added.

DAA developments
CommScope will also show some advancements tied to the emerging Distributed Access Architecture, which will deploy processing toward the edge of the HFC network to reduce centralized powering and cooling requirements and to deepen the digitization of the network and boost overall network efficiency and capacity.

CommScope's DAA Aggregator is a new product that fits inside a fiber node that, as the name implies, enables an operator to aggregate multiple HFC nodes and avoid having to deploy a Remote PHY Device (RPD) at every single node across the MSO's access network. This pay-as-you-grow approach will also allow cable operators to add RPDs to other nodes and bandwidth demands rise. In distributed HFC networks, the RPD contains physical layer circuitry out in the node and connects to the CCAP core.

Getting Down With DAA 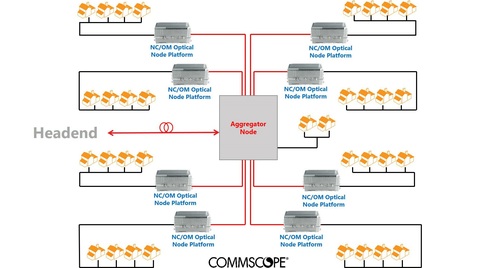 CommScope's DAA Aggregator can consolidate and manage up to eight individual fiber nodes deployed toward the edges of the HFC network.
(Source: CommScope)

CommScope estimates that the DAA Aggregator increases the number of homes passed per RPD serving group from 20 to 40, to between 150 to 300.

And that scenario might change from MSO to MSO. An operator, such as Comcast, that is focused on Node+0 (where the amplifiers between the home and the node are eliminated) likely won't need an RPD in every node, and can share up to eight nodes into an aggregator. On the other hand, operators going with Node+2 or Node+3 (two or three amplifiers between the home and the node) might want to install an RPD at every node because they'll have enough homes feeding off of it to fully utilize the RPD.

Kessler said the DAA Aggregator is in field trials and is expected to reach product toward the end of 2019.

"This way they [the cable operators] can make very efficient use of the RPD technology," Kessler said.