Charter Communications confirmed that it is bugging out of the home security business and directing those few existing customers to smart home/security partnerships struck with two suppliers -- Amazon-owned Ring and Abode.

Charter began to reach out to those customers in December about the decision to stop supporting that service, called Spectrum Home Security, on Feb. 5, 2020. Charter inherited that business from its acquisition of Time Warner Cable and halted sales of the offering soon after the TWC deal closed in mid-2016. Charter's legacy home security product is based on technology that Comcast obtained via the 2017 acquisition of a piece of Icontrol (Alarm.com bought the remaining pieces of Icontrol, including its Z-Wave platform and Piper-branded video security system). 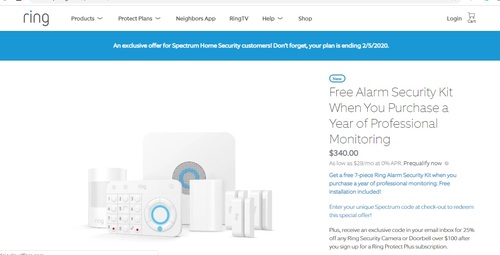 Charter is directing its home security customers to DIY-focused products offered in partnership with companies such as Amazon-owned Ring.

Charter has not revealed how many customers were on that legacy product, but said a low percentage of its base are impacted by the decision.

"We have made the decision to exit the Home Security business that we inherited with the 2016 Time Warner Cable and Bright House Networks transactions," Charter said in an emailed statement. "We are dedicated to making this a smooth transition for our Home Security customers and have partnered with Ring and Abode, two leading home security providers, to bring our customers exclusive offers and discounts on replacement security service and products."

Still, the decision, which will mean some legacy devices won't work with Charter's apps, did cause some hand-wringing among consumers who invested in products that integrated with the operator's legacy platform. Charter's Ring offer includes a free alarm security kit (seven pieces in all: an alarm base station, keypad, three contact sensors, one motion detector and a range extender) along with discounted Ring connected cameras and doorbells, but still requires customers to buy a year of monitoring services from Charter. The Abode deal also includes a package of smart home products, including a gateway, three door or window sensors, a motion sensor, key fob, keypad and a connected camera.

Though Charter is getting out of the home security business, it remains active in other aspects of the smart home. Last November, Charter announced it had adopted OpenSync, an open source framework originating with Plume, that is being used to power a new in-home WiFi management service initially introduced in Austin, Texas. Charter has also teamed with (and invested in) Cujo AI on products that will center on in-home network monitoring and security services.

Charter has been signaling a change to its smart home approach for about a year. Last January, Light Reading reported that Charter was in talks with Ring and other suppliers about integrations that would support a self-install operations model.