Nokia, Altibox Give Cable Network Virtualization a Dose of Reality

The pace of deployment of the distributed access architecture (DAA) and cable network virtualization isn't moving as rapidly as some suppliers have hoped, but it is moving.

While Comcast appears to be leading the way with DAA development and adoption in the US, deployment activity is percolating in some relatively small pockets in Europe.

One such example surfaced last week when Nokia announced that Altibox is pushing ahead with a plan to consolidate its hubs in a region and using DAA as part of a broader plan to deliver all of its services, including video, over IP.

"It's a full network transformation," Hans Slabbinck, Nokia's regional product manager for cable in Europe, said of the Altibox deployment, which is already underway. He said Altibox's plan is to swap out its legacy gear with Nokia's virtual DAA platform, enabling DOCSIS 3.1 and DOCSIS multicast techniques that will pave the way for a full IPTV offering.

Nokia and Altibox have a framework deal that covers Altibox's HFC and fiber networks in parts of Denmark and Norway, but the initial scope of the work centers on a deployment with Eidsiva Bredbånd, an Altibox partner in Norway.

The plan with Eidsiva Bredbånd consolidates the service provider's ten small hubs into a centralized hub that feeds services to Nokia's new line of remote PHY nodes that also contain the network MAC and virtualize the functions of the cable modem termination system (CMTS). Those DAA nodes, in turn, will be controlled by the centralized hub using commercial-off-the-shelf servers rather than by purpose-built hardware, such as a converged cable access platform (CCAP) chassis. 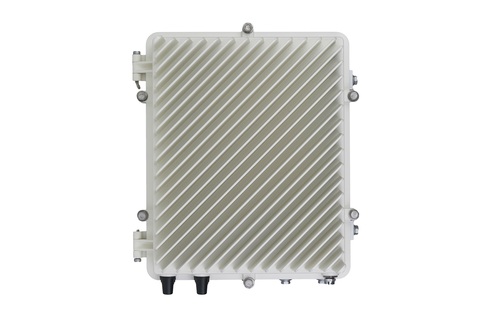 Nokia has developed versions of its virtual DAA node for both strand-mounted and street cabinet-based deployments. Pictured is the Gainspeed SC-1D node that Altibox is deploying.

Nokia's initial deployment with Eidsiva Bredbånd is relatively small, involving a network serving about 10,000 customers, but it also represents an initial shift toward a new network architecture that pushes more of the processing towards the network's edge while also virtualizing the core functions.

For the deployment, Altibox is using a Nokia virtual DAA node developed for the European market. While nodes for North American cable networks tend to be strand-mounted, devices for Europe usually need to be built into small street cabinets. Nokia says it has developed versions of its virtual DAA node for both use cases.

2019 a 'transition year' for DAA
While deployments of DAA aren't moving as rapidly as some vendors might like, particularly among larger cable operators, 2019 has emerged as a "transition year" for distributed access architectures, according to Jeff White, Nokia's head of cable strategy.

He said operators are taking a closer look at DAA for both tactical and strategic reasons. On the tactical side, some operators, like Eidsiva Bredbånd, are looking to collapse their hubs as they attempt to reduce power and space requirements on the network. On the strategic side, there's a desire to migrate functions to software and future-proof their networks as they split nodes and add capacity, White said.

There's also a desire to pivot away from purpose-built CCAP chassis and analog optics, and to pivot toward COTS equipment, digital optics, and routers and switches that are not cable-specific. That, White said, enables cable operators to generate bigger economies of scale because they can now tap into products and technologies that are being used across the entire telecom industry.

White said Nokia, which got more involved in the cable access game via its 2016 acquisition of Gainspeed, has deployments and trials underway across multiple regions. Nokia, which competes in this segment against suppliers such as Arris/CommScope, Cisco, Harmonic and Casa Systems, has announced DAA and cable network virtualization agreements with WideOpenWest, the Colorado-based competitive cable provider, and with Netia, a service operator based in Poland.

Nokia is also hoping to gain entry as the cable industry pushes ahead with DAA networks that can interoperate with nodes from multiple vendors and enable MSOs to diversify their sources of those products. White said interoperability efforts across the industry are taking a bit longer than anticipated due to the complexities of linking multiple types of remote PHY devices to a CCAP core.

"We're focused on interoperability and reaching out to vendors," White said. "We're doing everything we can to be interoperable."

happynewyearwallpapers 4/13/2020 | 6:49:19 PM
speed test the details about hotmail and its account creation  is so necessary because of the conversion of hotmail into outlook. people are so confused about
Reply | Post Message | MESSAGES LIST | START A BOARD

happynewyearwallpapers 4/13/2020 | 6:47:54 PM
Re: Network errors with the Outlook based system Thanks for sharing this information with us .

maddu 4/12/2020 | 6:20:58 AM
MLB Reddit streams The online game streaming is best thing it is better than the channels on TV that has many problems in this regard are best it allow us to have our games live and without breaking signals.
Reply | Post Message | MESSAGES LIST | START A BOARD

maddu 4/10/2020 | 12:22:30 PM
Hotmail account the details about hotmail and its account creation  is so necessary because of the conversion of hotmail into outlook. people are so confused about <a href="https://mtechandhealth.com/hotmail-account/" target="_self">Hotmail Login</a>
Reply | Post Message | MESSAGES LIST | START A BOARD

stanleypeters130 1/9/2020 | 1:19:16 AM
Hotmail Hey thanks for sharing the news over my hotmail account :) its been a pleasure to be the member of this website you are so helpful and informative ..
Reply | Post Message | MESSAGES LIST | START A BOARD