CommScope claims its new, high-capacity remote PHY device (RPD) can snap into a majority of its deployed fiber nodes and ease cable operator migrations to new distributed access architectures that will some day deliver symmetrical speeds up to 10 Gbit/s.

That new remote PHY device, called the RD1322, can fit inside Arris's base of NC4- and OM4-series fiber nodes (CommScope wrapped up its acquisition of Arris in April). Those new modules could fit inside roughly 75% of Arris's deployed base of nodes, the company claimed. 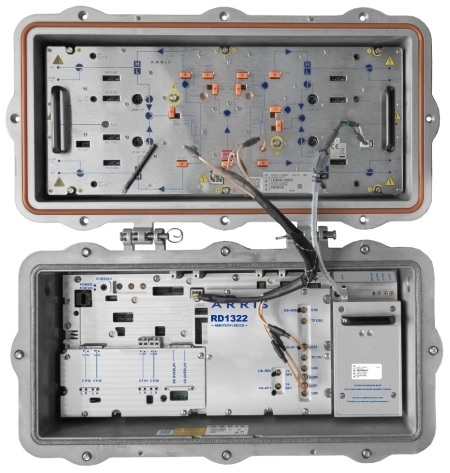 CommScope claims that 75% of the deployed base of Arris nodes could potentially take its new RD1322 2x2 Remote PHY Device.

"It broadens the applicability of RPD nodes," Todd Kessler, SVP of product management at CommScope, said, noting that customer trials of the RD1322 are expected to start later this year before proceeding with full-scale production.

That broadening is also taking place as cable operators take a closer look at a distributed access architecture (DAA) that will see key electronics in the PHY layer pushed out toward the edge of the network and away from a legacy approach whereby those electronics are packed into a centralized converged cable access platform (CCAP) chassis. That new architecture is designed to improve signal quality, boost network capacity, and distribute growing space and power requirements.

"Operators need more than one service group coming out of a fiber node, if they want to delivery high throughput with a remote PHY architecture," he explained.

A targeted approach to deployment
And the modular approach should help operators migrate to remote PHY and DAA in most existing nodes and in a targeted fashion. Rather than having to endure the time-consuming and expensive process of changing out the node itself, compatible nodes can be upgraded with the new RFD modules. Plus, those upgrades can be done on an incremental basis by targeting them only to areas that are in need of big capacity boosts.

"They [cable operators] don't have to upgrade an entire area or an entire city," Kessler said. "We see it in evolutionary steps rather than a gigantic investment."

That flexibility is key because cable operators will aren't expected to be uniform in how they evolve and upgrade their HFC networks. While Comcast has been focusing on Full Duplex DOCSIS and N+0, other MSOs aren't expected to take that step.

The emerging DOCSIS 4.0 specifications at CableLabs are expected to cover these variations as the industry moves toward networks that can support a so-called "10G" initiative that envisions symmetrical 10 Gig speeds on HFC, FTTP and even wireless networks.

CommScope's approach "facilitates the transition to DAA" for a wide range of cable network scenarios, Jeff Heynen, research director of broadband access and home networking at Dell'Oro, said. "This should make the decision to move to DAA easier for operators."

While fiber nodes from multiple vendors are being made to interoperate with different cable network cores that interoperability doesn't extend to the modules. CommScope modules work with CommScope nodes but not with Cisco nodes, for example.

That additional level of interoperability is being explored in work underway by vendors, MSOs and the SCTE for an emerging Generic Access Platform (GAP) standard. An update on GAP's progress could be shared at the 2019 Cable-Tec Expo in New Orleans this fall, but the full development of those standards and the subsequent adoption and widescale deployment of GAP-based products is likely still years away.