In another move linked to its new and evolving video strategy, WideOpenWest has launched a trial service that delivers a traditional mix of pay-TV services to Android TV boxes over IP, along with support for a voice-based remote, cloud DVR and integrations with Netflix and other third-party apps from Google Play.

For the trial of the new service, called WOW! tv+, in Columbus, Ohio, the cable operator is exploring a plan to deliver its pay-TV services and a deeper video on demand library via an IP-based video platform. That move would mark the start of a transition away from the company's legacy QAM-based video platform, Scott Barton, WOW's SVP of product, said.

WOW! tv+ is based on the Android TV operator tier, so the box defaults to the WOW's pay-TV streaming app while also supporting content discovery (including voice-based search based on Google Assistant) across third-party apps and services.

Update: WOW shared an image of the Android TV device it's using for WOW tv+: 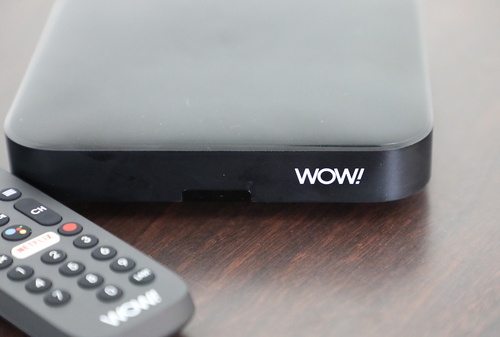 WOW has not announced its technology and product partners for the IP-based video offering, but stressed that WOW! tv+ is a multiple vendor solution and not a turn-key offering.

WOW will focus the trial on new high-speed Internet customers that also want a pay-TV package, Barton said. Some customers on WOW's legacy pay-TV platform (which uses devices and software from Espial/Enghouse) might also be converted over to the Android TV-based option, but it's not the primary focus of the test.

A new twist on pay-TV
WOW! tv+ packages closely mirror the lineups and pricing (and promotions) for the company's legacy pay-TV service, but on a more advanced, IP-based platform. For example, the "Medium TV Package" will feature more than 100 channels (including local stations), VoD and a cloud DVR starting with 50 hours of storage, and "Large TV Package" with more than 130 channels. Like WOW's legacy pay-TV service, the new offering will also come with 12-month promotional pricing and require a two-year contract.

Barton said WOW is conducting the trials to provide more choice to customers who are seeking out new ways to access video services.

WOW hasn't announced when it might expand either of those trials to other markets, such as Auburn, Alabama; Chicago; Detroit; Cleveland, Ohio; and Knoxville, Tennessee. But the company is altering its video strategy as the traditional pay-TV market continues to decline.

Jeff Baumgartner 3/5/2020 | 3:39:42 PM
Streaming We got a little push back from WOW about the use of the term "streaming" in the hedline since this new offering is an IP-based version of its cable TV service and different than the OTT-delivered options avaialble from the vMVPD partners like fuboTV and YouTube TV it's working with on a trial in a different market.

They don't consider WOW!tv+ to be a "streaming" service. We're keeping the hedline, since an IP-based managed video service or an OTT-delivered TV service are both technically "streaming" in my book.

But I'm open to argument and discussion based on everyone's interpretation...please weigh in. Thanks!