What's next for T-Mobile's TVision?

T-Mobile's plans for 5G dominated discussions after its merger with Sprint closed, but the company had little to say today about its grand scheme to take on the world of pay-TV. In fact, T-Mobile has said very little about its TV service plans during the entire two-year merger process.

But T-Mobile hinted there's much more to come as it prepares the next chapter in a TV story that began in early 2018 with the acquisition of Denver-based Layer3 TV, the company behind a big bundle, in-home pay-TV service that was rebranded as TVision in April 2019. 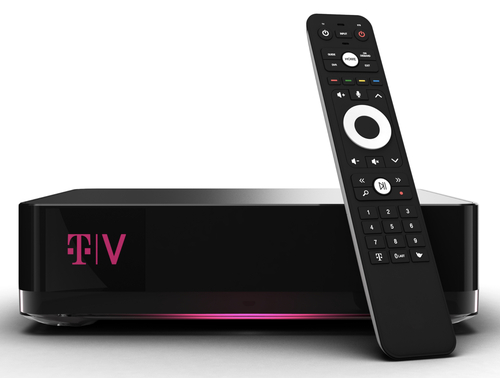 TVision's current offering runs on an operator-supplied IP set-top box, but future iterations of the service are expected to run on a wide range of third-party streaming platforms.

Other than the new splash of paint and some minor upgrades, not much else has changed with TVision of late. TVision availability remains limited to several US markets for a service that starts at $90 per month and features more than 154 channels and over 35,000 VoD titles. The service supports voice control (via Amazon Alexa or Google Assistant) and runs on IP set-top boxes equipped with local DVR storage, 4K capabilities and some limited OTT app integrations.

While there's nothing new being announced today about T-Mobile's pay-TV plans, "TVision and home entertainment remain important parts of our longer term strategy," a T-Mobile official said via email, noting that the company expects to share more details later in the year.

According to multiple industry sources, T-Mobile has been retooling and redeveloping the technology platform it acquired from Layer3 TV because the legacy platform did not scale to T-Mobile's liking. While the need to retool played a part in the delayed rollout of a next-gen version of T-Mobile's TV service, the lengthy merger process with Sprint and the distractions that went along with it was another culprit, sources said.

Help from MobiTV
One of the companies working closely with T-Mobile on the next iteration of the operator's pay-TV platform is MobiTV, an Emeryville, Calif.-based company that has developed an app-based streaming platform in use by dozens of cable operators, telcos and other service providers that can run on a wide range of devices, including Android TV and Apple TV boxes, Roku and Amazon Fire TV players, and smartphones and tablets.

That approach seems to fit well with TVision's stated strategy to extend service beyond its own set-top box and run on "popular third-party TV platforms  That means getting TVision will be as simple as downloading an app – no box or extra equipment needed."

Another aim of the MobiTV partnership is to help T-Mobile develop and deploy video streaming services (or at least some specific tiers of services) that can be offered nationwide, a source familiar with the plan said. The current TVision offering is limited to select US cities such as Chicago; Dallas-Fort Worth; Los Angeles; New York City; Philadelphia; San Francisco; Washington, DC; and Longmont, Colo.

T-Mobile declined to comment on the MobiTV rumor, noting that it holds partnership discussions on many areas of its business. MobiTV, which has worked with T-Mobile on mobile-focused TV services in the past, has been asked for comment.

More details about T-Mobile's TV plans should be revealed in the coming weeks and months, but the company has already expressed a desire to bundle TVision with new wireless home Internet services that will be underpinned by the nationwide 5G network that will be spawned by the Sprint merger.

"We're getting ready for a world where 5G replaces home broadband and TVision Home will replace your cable TV  and launching a complete, high-end home TV service is a key part of that strategy," the company explains in its TVision FAQ.

T-Mobile paid about $325 million for Layer3 TV. According to an SEC filing, the carrying value of the goodwill associated with the company's Layer3 TV reporting unit was $218 million as of December 31, 2019.