A pandemic that caused consumers to tighten their belts, in addition to the temporary loss of live televised sports  considered the glue holding pay-TV packages together  played a critical role in accelerating US pay-TV subscriber losses to record levels in the first quarter of 2020. And – hold onto your remotes – those numbers are expected to get even worse in Q2.

Per MoffettNathanson's latest "Cord-Cutting Monitor," the US pay-TV industry lost 2.15 million subscribers in Q1 2020, led by a record loss of 1.8 million subs among "traditional" service providers (cable operators, satellite TV and telcos). That was paired by an imploding virtual multichannel video programming distributor (vMVPD) sector (YouTube TV, Hulu, Sling TV, fuboTV, et al) that shed 341,000 subs in the period, versus a gain of 90,000 subs in the year-ago quarter.

Back to the traditional side of the pay-TV ledger, its annual rate of decline sunk to 7.6%, also a record, Craig Moffett, analyst at MoffettNathanson, noted in the report. 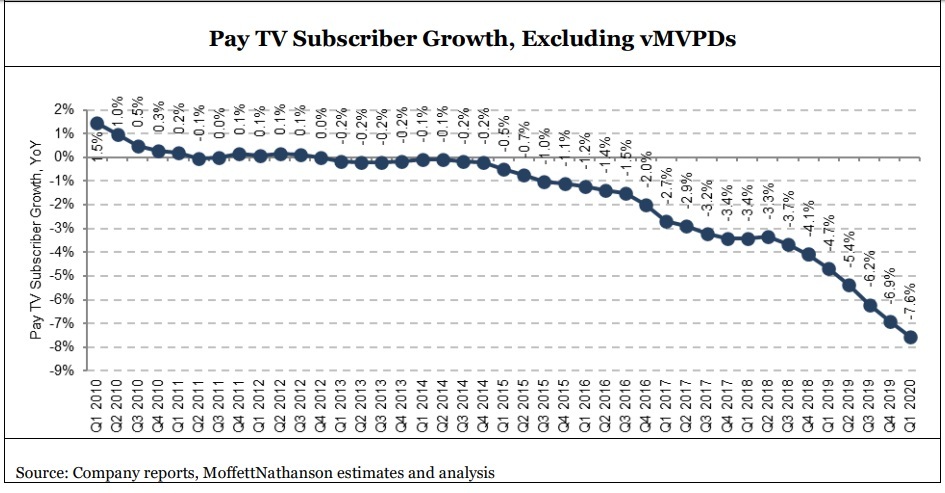 And that's not the worst of it. Moffett cites US Census Bureau data indicating that Q1 saw "blowout new household formation" (a gain of 769,000 this year versus a loss of 221,000 last year), meaning pay-TV also did a poor job attracting customers from new occupied homes and apartments.

Satellite TV providers (AT&T's DirecTV and Dish Network) combined to lose more than 1 million subs for the third quarter in a row, dropping its annual rate of loss to a worst-ever 14.3%, according to Moffett. US cable's combined loss of 600,000 pay-TV subs, for an annual growth rate of -4%, "looks positively gentle by comparison," but was also the worst on record, he added.

US pay-TV came out of Q1 with a penetration of 63% of occupied households, a level not seen since 1995, and there are now more non-subscribing US households (46 million) as there were pay-TV subs in 1988, according to Moffett.

"With sports off the air, and with the pain of the tsunami of unemployment just beginning to hit as the quarter ended, all these numbers will get worse in Q2," the analyst predicted.

The shrinking virtual MVPD market
But the bigger story in Moffett's estimation is the unraveling of the vMVPD market, which shrunk by 5.3% in Q1 2020. Yes, another record. 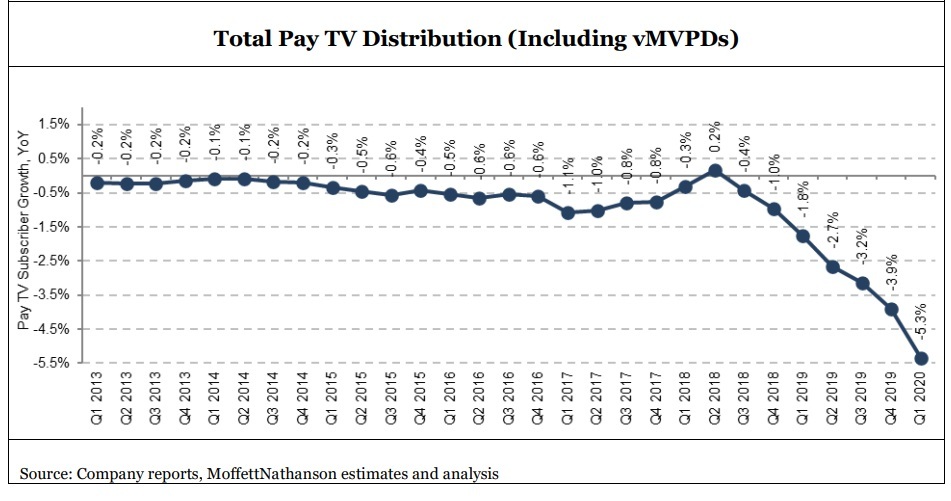 OTT-TV service providers haven't been capturing all of the consumers fleeing traditional pay-TV providers for some time, but the collective market is now receding as many vMVPDs have been forced to raise prices in recent months while others simply exited the market. Moffett estimates that, on a net basis, none of the traditional video distributor losses in Q1 landed with vMVPDs.

Taken together, it spells bad news for programmers that have counted on OTT-TV options to help them weather the cord-cutting storm.

Though price hikes certainly have hurt virtual MVPDs, it's just one of the problems they face as they are also fighting an uphill battle against the linear TV model and the recent loss of sports.

"Without sports and with economic pressures on families mounting by the end of the quarter, the migration to vMVPDs absolutely tanked in Q1," Moffett wrote.

Are SVoD "lifeboats" enough?
But Moffett also points out that programmers can take some comfort as they launch or prepare to launch "lifeboats" in the form of new subscription-based or ad-supported streaming services. Disney now has Disney+, AT&T's WarnerMedia's HBO Max service will debut on May 27, and NBCU's Peacock will go nationwide on July 15 following its early preview on Comcast's X1 and Xfinity Flex platforms.

ViacomCBS, meanwhile, is gearing up to launch a "broad pay" streaming service that will expand on its current CBS All Access offering, and Discovery Communications has its own direct-to-consumer streaming service in the works.

But will they be enough to completely counter the continued erosion of pay-TV and declining ad markets? Moffett's not so sure.

"[I]t is increasingly clear that as consumers climb into these lifeboats, they are leaving the (sinking) motherships behind," he wrote. "Notwithstanding the princely valuations being accorded SVOD platforms like Disney+, we doubt the DTC lifeboats will ever come close to matching the profitability of the business they are ostensibly designed to replace."

But the overall situation for pay-TV is creating an opportunity for both SVoD and advertising VoD services, as Moffett estimates there are now about 36 million households not taking a pay-TV service today. SVoD and AVoD "are the programmers' sole hope of maintaining a relationship with, and extracting revenue from, these households," he wrote.

And it's evident that others have taken notice amid a recent flurry of M&A activity among AVoD services, including Tubi (acquired by Fox); Xumo (acquired by Comcast) and Pluto TV (now part of ViacomCBS). Additionally, NBCU has made a play for Vudu, a digital video service that also has a free, ad-supported component.