Comcast, Charter Communications and Altice USA are poised to gain more ground in Q2 2020 on incumbent mobile service providers that have been staggered by the pandemic, a top industry analyst predicted.

"Cable's disproportionate share gains will continue in Q2," Craig Moffett, a principal analyst with MoffettNathanson, predicted in a new wireless industry report issued Monday. "In the grand scheme of things, they still have few subscribers to lose, and the industry's denominator will remain depressed, amplifying the relative gain," he explained. 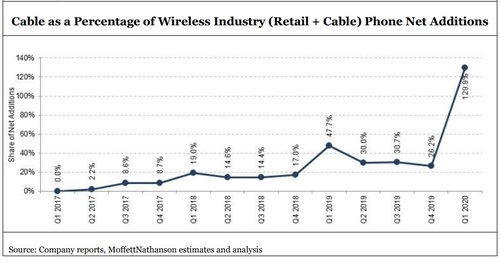 Although US cable's wireless activity has also been hindered by pandemic-caused store closures, operators are likewise expected to push hard in other ways to drive in new customers.

While Altice USA's revised offer no longer carries the "for life" guarantee of the original offer, "it remains one of the industry's most aggressive," Moffett points out. "Given the levels of economic hardship that have accompanied the lockdowns, one can reasonably imagine that these kinds of hyper-aggressive pricing plans won't have much trouble breaking through to capture market share."

And cable's not the only significant competitive threat the incumbents need to be wary of. Moffett points out that they'll also be facing off against Dish Networks' move into the prepaid market and, eventually, the postpaid market. With no backbook to protect, expect Dish to "take an aggressive posture" from the get-go, he added.

"The pressure all this will place on the incumbents should not be underestimated," Moffett explained.

He also doesn't expect the mobile competitive situation paired with the pandemic to devolve into another lengthy price war among incumbents as it did for five years starting in 2013, when mobile phone subs last went negative. But he does expect all of them to see record-low activity levels (lower gross adds, upgrade rates and lower churn), with T-Mobile set to feel the most impact.

Mobile unit growth will "remain suppressed" along with further contraction of ARPU, Moffett concluded. However, margins will stay strong as long as handset upgrade and churn rates remain low, he added.

"There is certainly still risk if unit growth doesn't recover after the lockdowns end," Moffett noted. "And the cable operators will continue to put pressure on net adds even if activity levels do return. But our base case, for now, is that the industry narrowly avoids a return to the ugliness of 2013- 2018."