Fueled partly by a pandemic that caused consumers to hunker down at home, overall US broadband subscriber growth re-accelerated to 2.9% in the first quarter of 2020 year-over-year, according to new data from MoffettNathanson.

MoffettNathanson said COVID-19-driven lockdowns across the US played some role in the Q1 rise, but also attributed it to a strong quarter of new household formation that occurred (at least in the first part of Q1 before the pandemic started to fully take hold). 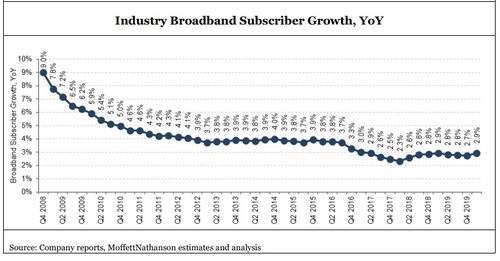 While overall US broadband penetration rose modestly in Q1 2020, to just over 82%, cable again dominated the subscriber growth story in the period.

Per MoffettNathanson's analysis, US cable broadband sub growth improved to 5.4% in Q1 2020 year-over-year, marking the fastest growth rate for MSOs since 2017. Meanwhile, US telcos suffered their fastest aggregate rate of broadband decline ever, at 2.2%.

"The first quarter saw an unexpected acceleration in Cable market share gains, particularly late in the quarter," Craig Moffett, analyst with MoffettNathanson, wrote. "It is now clear that our Q2 estimates for the major cable MSOs, which in our previous coronavirus forecasts had predicted negative net additions, need to come back up."

Widening the gap on wireless-only broadband
Meanwhile, increased usage of wired broadband networks during the pandemic only "widened the gap" against wireless data consumption as consumers relied more heavily on home Wi-Fi on all devices, including smartphones. OpenVault, for example, has put out a new COVID-19-influenced run rate of 460 gigabytes per subscriber per month, or roughly 40x the average use of a mobile phone.

While that widened gap won't be permanent, it does underscore why, even in a recession, that "it may prove all but impossible for customers to substitute wireless-only for wired broadband," Moffett explained.

Cable broadband gaining more ground on telcos' 'middle tier'
Additionally, Moffett said new data from Comlinkdata (based on a massive panel of 200 million US smartphones that help to identify the underlying broadband providers that devices are connecting to home Wi-Fi) also show that US cable operators are accelerating broadband market share gains from telcos. And that acceleration is not only occurring in areas covered by legacy DSL technologies, but also within a "middle tier" of telco competition that includes access technologies such as FTTN, IP-DSLAM or augmented DSL vectoring.

According to Comlinkdata, Charter Communications currently has the highest broadband market share in its footprint, with about 71.8% of subs picking the cable op over its telco and cable overbuilder competitors. The data also showed that Comcast enjoys a 68% installed share in its footprint, followed by Cable One (48.6%). Meanwhile, WideOpenWest, a competitive cable overbuilder, had a share of 28.3% against all broadband competitors, according to Comlinkdata.

Additionally, Comlinkdata's info indicates that Comcast faces competition from ILEC FTTP in 33% of its footprint, compared to Charter (28%) and Cable One (a mere 5%). Charter has a 61.8% share in those FTTP competition markets, with Comcast at about 55.8%. 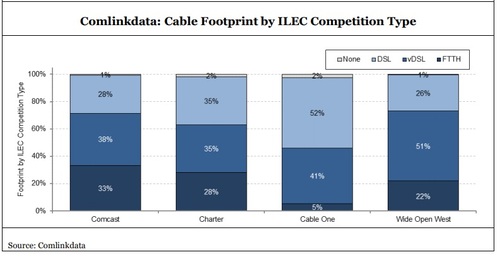 That data suggests that cable is "punching above its weight" where it faces FTTP competition, Moffett noted.

"Broadband is increasingly a two-horse race between Cable and TelCo FTTP, where it exists," Moffett wrote. "In every other competitive cohort, the TelCos' technology platform is being rendered irrelevant. Which is a roundabout way of saying  we believe that Cable's accelerating market share gains will prove durable."