US broadcasters plow ahead with 'NextGen TV'

US broadcasters have been forced to rein in some of their plans to light up ATSC 3.0 signals due to pandemic-fueled complications, but many still expect to introduce initial versions of "NextGen TV" in several markets later this year.

The deployment of ATSC 3.0 by some major broadcasters was the key theme of a panel session assembled for this week's NAB Digital Express, an online event that has taken the place of the canceled NAB Show that was set to happen last month in Las Vegas. 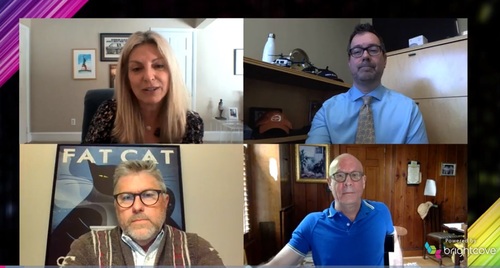 ATSC 3.0 launches in Portland, Oregon and Las Vegas were on track to occur prior to NAB before the pandemic took hold. Under revised timelines, the launch in Sin City is now set for late May, with Portland to follow in July, according to John Hane, president of Spectrum Co. LLC, a cooperative founded by Sinclair Broadcast Group and Nexstar Media Group.

Also on tap are June launches in Salt Lake City, Pittsburgh and Nashville. However, all of these new launch timelines remain subject to travel restrictions, which have been a primary gating factor for getting equipment and people where they need to be to get everything installed and set up.

The intention is to stick to those deferred dates until conditions dictate otherwise, Hane said.

In all, Spectrum Co. LLC had 32 markets on track for launch prior to the pandemic, but has since had to drop two or three markets from that list as priorities changed due to COVID-19, Hane added. However, the hope is that those deferred plans will all be replaced with launches in larger markets in 2021.

"Everybody is being as aggressive as possible and as prudent, and I think we're still on track to get a lot of markets launched this year," Hane said. "I think we're in good shape to the extent we can be."

Broadcasters have a lot riding on ATSC 3.0, the next-gen signaling standard that will support sharper pictures with 4K and high dynamic range, advanced, immersive audio (including selectable language and the ability to pump up spoken dialogue), targeted advertising, VoD services and interactive applications. While signals via the new IP-based standard will initially be supported on a select blend of ATSC 3.0-capable TVs, the grander plan is to enable access on smartphones and other mobile devices.

US broadcasters, in tandem with the Consumer Technology Association, will use the NextGen TV brand on TVs and services that utilize the new standard.

TV makers tune up plans for ATSC 3.0
Meanwhile, a trio of major TV makers – Samsung, LG Electronics and Sony Electronics – have ATSC 3.0-based products launched or on the way. About 20 TV models bearing the NextGen TV logo are expected to hit the retail market this year.

Although not every feature supported by ATSC 3.0 will be offered right out of the chute, broadcasters and device makers will be able to add them and evolve their NextGen TV offerings, panelists said.

ATSC 3.0 technology "is very much like a smartphone" in its ability to add functions and services and evolve over time, Dan Schinasi, director of product planning, consumer electronics, at Samsung, said during a session about how TV makers are tackling the new standard.

Panelists also were asked to look forward to what will be in store at CES 2021 with respect to ATSC 3.0.

Samsung said the launch in Las Vegas will allow showgoers to see ATSC 3.0 in action.

Brett Jenkins, EVP and CTO at Nexstar Media Group, acknowledged that ATSC 3.0/NextGen TV is confronted with the kind of "chicken and egg problem" that any new service tends to face.

Now that several major TV makers have stepped up to the plate, "it's really on us as the broadcast industry to start lighting up markets," Jenkins said, noting that US broadcasters have had to work together with channel-sharing arrangements to make ATSC 3.0 a reality because they don't have access to extra spectrum as they did during the earlier analog-to-digital/HD transition.

"We are weeks away from lighting up our first two markets," he added, referring to those on the way in Portland and Las Vegas.

Although the pandemic has tossed a wrench into some of the initial launch timing, ATSC 3.0 is "high on our list of what we want to be shouting to the world about when we get to our post-COVID 'new normal,'" said Kerry Oslund, VP, strategy and business development at The E.W. Scripps Company.

And those initial launches will be important and serve as a "template" that will help broadcasters move faster with future launches of NextGen TV, Oslund added.

A glimpse of interactivity
A separate session at NAB Digital Express showed off a prototype interactive app developed by Fincons US in partnership with CBS delivered on ATSC 3.0 signals.

That prototype, built around the CBS This Morning Saturday segment called "The Dish," enables viewers to access info on the segment's featured chef, obtain recipes, order ingredients and complete the transaction on their smartphones. The app also provides viewers with on-demand access to past installments of The Dish.

As explained by Greg Jarvis, executive VP and GM of Fincons US, viewers would be alerted to the presence of the interactive component by the appearance of a bug in the lower right hand corner of the screen. 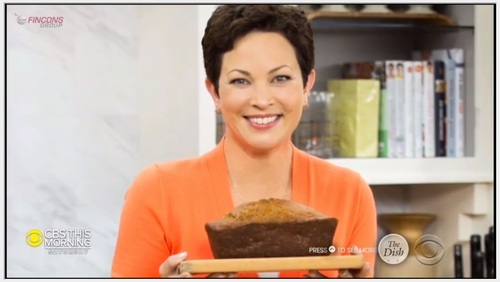 A bug in the lower right hand of the screen would tell the viewer that the show has interactive elements than can be accessed with the remote control.

Once prompted by the remote control, the app would open up a main carousel that provides access to a range of interactive elements, including the ability to find a recipe and share it on Facebook or send it to the viewer directly via email or mobile text. 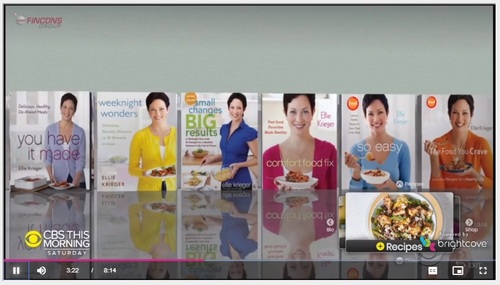 Once the ATSC 3.0 interactive app is activated, the viewer would be presented with a main carousel that provides access to recipes, past episodes and a way to order ingredients for direct delivery.

Those interactive components would be delivered to the TV over-the-air via IP-based ATSC 3.0 signals.

Jarvis termed the demo an early prototype but said it's a prime example of how broadcasters and programmers will be able to utilize ATSC 3.0.