Google is working on a next-gen Chromecast Ultra streaming device that will be powered by Android TV and support a separate remote control with an integrated microphone, 9to5Google reported, citing a "reliable source" familiar with the plan.

The new, apparently more powerful streaming dongle, codenamed "sabrina," will support 4K and High Dynamic Range content along with Bluetooth and Wi-Fi connectivity, the report said, noting that the next-gen device will resemble the 4K-capable Chromecast Ultra that Google introduced in 2018 and currently sells for $69. 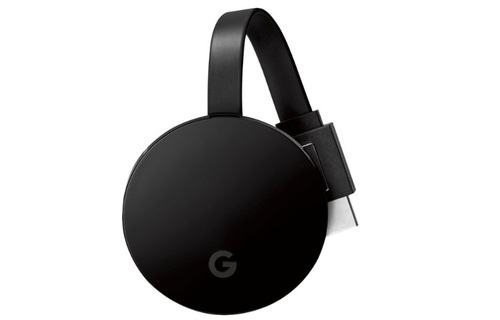 The current-gen Chromecast Ultra supports 4K video, but does not bake in Android TV or work with a separate remote control.

Google has not commented on the new Chromecast device, but Protocol's Janko Roettgers spotted what appears to be an associated Google-made remote as it passed through the FCC.

In addition to supporting a separate remote instead of being controlled by the user's smartphone or tablet, Google's next-gen Chromecast will be a more powerful and capable streaming device if it is indeed powered by a self-contained Android TV platform that's outfitted with an onboard user interface and integrated apps.

Turning the new Chromecast into a fully fledged Android TV device could also be an important retail addition as Google attempts to cut into the streaming platform lead of Roku (36.9 million active accounts at the end of 2019) and Amazon's Fire TV (about 40 million active users). According to a Parks Associates study from the fall of 2019, Chromecast made up just 11% of the US media streaming device market, down from 21% three years earlier.

Update: Bringing a full implementation of Android TV to Chromecast will help that product "get back in the game," Colin Dixon, founder and chief analyst at nScreenMedia, said.

While some consumers are content to control a Chromecast streaming dongle and to cast video to the TV using a mobile phone, others would much rather control and manage the device through a more traditional TV interface/operating system, he added.

"This will open things up to a lot more people who wouldn't use Chromecast and to get them on board," the analyst said. "It will do well if they come in with a very aggressive price."

Android TV, Dixon points out, is strategically important to Google given the operating system's tight integration of YouTube TV, so it makes sense to bring the OS to the streaming device category.

In addition to using the new Chromecast to bump up Google's streaming platform presence at retail, it's possible that Google might try to infiltrate the new device into the service provider sector, where Google's enjoyed some success using a version of Android TV that's optimized for pay-TV providers.

It's unclear when Google will reveal more details, including pricing and commercial availability, about the next-gen Chromecast. Citing concerns about the novel coronavirus (COVID-19), Google recently canceled the physical Google I/O developers event, which was slated to be held May 12-14.