According to some evidence hiding out in the open, Comcast is developing an interactive/enhanced television application for its X1 platform that stems from its 2017 acquisition of deep metadata specialist Watchwith.

A tile for an Internet-delivered Watchwith offering has appeared along several other apps that have been integrated with X1. 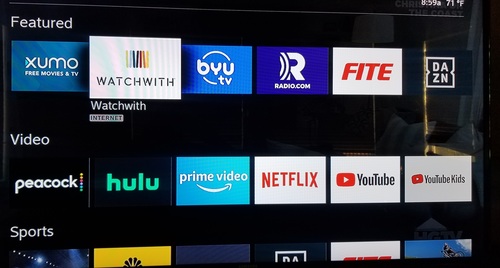 When one clicks on the tile, the viewer is met with a message that a new app will shortly deliver "interactive livestreams" managed with the X1 remote. As for timing, it merely says this capability will be "coming soon." 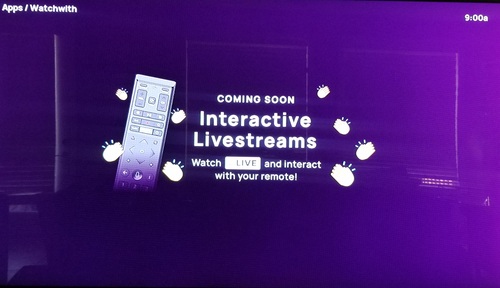 Comcast wouldn't say much more about what it's working on, other than to note that it's currently testing some ways to enhance programming through interactivity.

But there's other data floating around that offers some hints about what Comcast could have in mind about in-program interactivity, such as polling and voting, as well as interactive product placement and enabling customers to purchase featured products via the TV.

Per this overview posted online, Watchwith's deep metadata platform enables partners to automatically ingest and tag their entire lineup or VoD catalog in a way that will pave the way for more viewer engagement with content. "If new revenue is your goal, Watchwith can automatically add in-program avails (create new inventory), let you approve and fine tune placement, and deliver a new type of in-program video advertising to generate net new revenue," it adds.

Watchwith's deep metadata technology can determine what's happening inside a movie, TV show or sporting event, with the cable op's X1 platform offering some clues. Watchwith accomplishes that in part via its Media Analysis Framework (MAF), a machine learning platform that performs real-time analysis of the thousands of video streams flowing through Comcast's cable network, laying the groundwork for real-time insights to be combined with interactivity.

Once the system understands what is actually happening inside the video content, it's then possible to more easily deliver contextually relevant, interactive components on a moment-to-moment basis.

Past Comcast-Watchwith collaborations
Comcast's past use of Watchwith offers some clues on the kinds of interactive/enhanced TV apps it might pursue.

For example, Comcast and Watchwith collaborated on an interactive audience voting feature for NBC's "The Voice" and E!'s coverage of the "People's Choice Awards." They also worked together on a TV-based commerce integration with Ticketmaster and NBCU-owned Fandango to help viewers obtain local theater info and movie showtimes and (at that time) pull up tour dates, venues and purchase tickets to Kelly Clarkson's US tour.

In additon, Comcast has used Watchwith's deep metadata tech for a smart resume feature that enables viewers to fast-forward through commercial breaks in DVR recordings (the system automatically returns the viewer to where the show picks up once the ad break is over, rather than requiring the viewer to do that manually).

"We're really just scratching the surface on ways people can interact with the shows they love on the best screen in the house," Zane Vella, Watchwith's founder and current VP of product, interactivity and advertising at Comcast, said in an interview in the fall of 2018.

The integration of Watchwith into the X1 stack "allows us to now trigger interactive features to any linear, DVR or on-demand program [and] deliver a personalized interactive user experience right on the TV," he added.

I don't know if this Watchwith teaser is also starting to appear on Xfinity Flex, the streaming/smart home service tailored for broadband-only customers that uses X1's cloud platform. But it seems like an obvious, additional spot for it to go. If anybody's seen it show up there, just drop me a line .

Like what we have to say? Click here to sign up to our daily newsletter
COMMENTS
Newest First | Oldest First | Threaded View
Add Comment
Be the first to post a comment regarding this story.
EDUCATIONAL RESOURCES
sponsor supplied content
Cox Business Account Executive
Welcome to the Winners Circle
Join the team at Cox Business!
Educational Resources Archive
More Blogs from The Bauminator
Kimberly Maki lends SCTE a helping hand