NEW YORK -- Cable Next-Gen Business Strategies -- US cable operators are making progress in their pursuit of lucrative, enterprise-sized services deals, but their bread and butter continues to center on small and midsized companies.

But as US cable continues to snag bigger pieces of the market from the telcos and scale up its own piece of the business services spoils, that rate of growth is slowing. Once considered a segment almost guaranteed to be driving double-digit growth and putting the pain to major telcos such as AT&T and Verizon, Breznick expects growth in 2020 to slip down to 5% to 6%. But even 5% still represents an additional $1 billion in revenues. 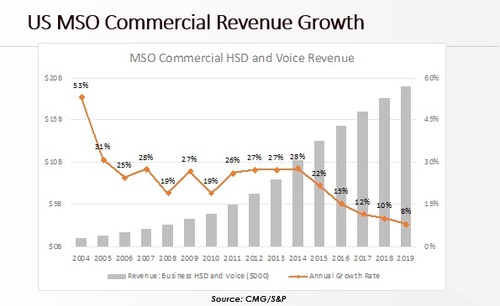 "The numbers are getting so high it's now much harder for cable to sustain double-digit growth," Breznick said.

And those numbers are indeed sizable. Comcast Business, which added a focus on Fortune 1000 companies to the mix in the fall of 2015, is closing in on annual revenues of $8 billion per year, while Charter Communications, thanks in part to its acquisition of Time Warner Cable some four years ago, is up to about $6.5 billion. Meanwhile, Altice USA is up to about $1.5 billion annually, with Cox Communications, one of the first US MSOs to go after the business service sector with some serious gusto, is nearing $3 billion in annual revenues in this segment, according to Breznick's estimates. Meanwhile, in the midsized US cable arena, Mediacom Communications is also flirting with business services revenues of roughly $300 million. 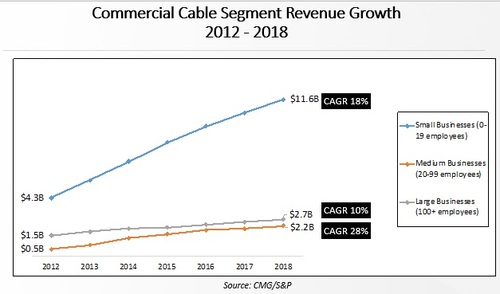 Despite a slower rate of revenue growth, there's still plenty of the pie for cable to pursue. Breznick said US cable has locked up in the range of 20% to 25% of a business services market that's worth some $150 billion annually, with about $50 billion derived from cable's SMB-focused activity.

"Cable's just a machine in the SMB market now," he said.

Seeking new revenue streams
Still, a big focus in the years to come will be on new or emerging business services that can re-accelerate revenue growth or round out cable's traditional strength in areas such as voice and broadband.

Some new opportunities for cable ops to be discussed here today include private LTE networks for enterprise customers, SD-WAN and virtualization services, as well as a new wave of low-latency connectivity requirements being driven by the white hot e-gaming market.

Even video, a pain point these days for US cable, is a potential growth driver on the business side. By way of example, Christian Nascimento, VP of product management at Comcast Business, will discuss here today how X1, the core of Comcast's residential pay-TV platform, has been tailored to rejuvenate this category for commercial customers.

Light Reading will have much more coverage from Tuesday's event later today and throughout the week.

Very Nice Post We appreciate it, try our services in The Data Recovery Guide, you may also View Our Maps, Call now.