Putting the squeeze on 8K

There's still little of 8K content to speak of, but the video and broadcast industry is already exploring advanced encoding techniques and AI-based technologies to deliver 8K in all (or most) of its glory at lower bit rates.

Preparing for the bandwidth intensity of 8K, as more content becomes available in the format, was a primary theme during a session dedicated to 8K delivery at NAB Digital Express, an online event built as an alternative to the canceled NAB 2020 show and held last week.

Even as TVs and other displays capable of supporting 8K start to trickle out (the latest sales forecast from the Consumer Technology Association expects about 504,000 8K TV units to be sold in the US this year), the amount of content available in the pixel-packed format is pretty sparse. 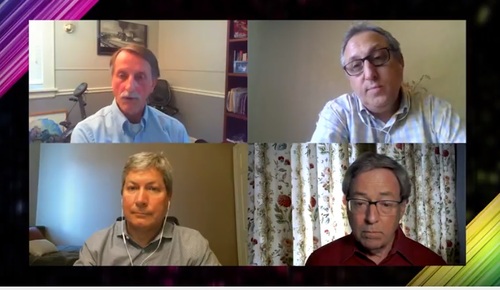 A big exception is NHK, Japan's public broadcaster. The Summer Olympics in Tokyo was set to be a premier event to show off 8K, with NHK set to broadcast the games in that format. That will have to wait because the Olympics have been postponed to 2021 because of the pandemic. Meanwhile, YouTube and Vimeo do have small libraries of 8K content, and TV-maker Samsung has an app store featuring 8K content. Meanwhile, several TV series, such as Netflix's Mindhunter, are being shot in the format.

While delivering live sports in 8K remains a difficult undertaking, providing access to 8K fare on an on-demand basis is the most technically feasible option today, Thierry Fautier, vice president of video strategy at Harmonic, said.

But 8K still carries a lot of data, which will could put pressure on networks as 8K displays and content become more commonplace. Fautier notes that 8K broadcasts in Japan eat up about 85 Mbit/s, but demonstrations of compression techniques have been able to trim that down to about 27 Mbit/s. Harmonic also took some live 8K coverage of the French Open tennis tournament offline and paired it with the company's cloud-based platform with content-aware encoding to squeeze it down to 25 Mbit/s to 35 Mbit/s, he said.

Samsung, meanwhile, has been using a set of codecs to stream 8K content – HEVC, AV9 and AV1 (a royalty-free compression format) – to help get bandwidth requirements to a manageable level, Fautier said.

Delivering 8K on a fiber network for streaming using HEVC at a bit rate of about 40 Mbit/s generally acceptable, Fautier said. But he warned that a new codec would likely be required when 8K starts to scale up.

The video industry is already starting to size up the data savings promised by next-gen codecs such as VVC (Versatile Video Codec), a successor to H.265/HEVC, also referred to as H.266; and EVC (Essential Video Codec). Fautier notes that EVC is slated to be about 25% more efficient than HEVC, with VVC potentially being 50% more efficient than HEVC.

Seeking AI assistance
Meanwhile, Harmonic and others are putting their weight behind dynamic and AI-assisted encoding that adjusts bit rates based on the complexities of the content.

"We are at just the tipping point" with AI-assisted encoding, Fautier said. "We have not explored all of the possible techniques that AI can bring us, but I think 50% reduction compared to a classical approach is already a very good savings."

And that AI-aided technology is being viewed as a technique that can upscale or downscale 8K content.

Samsung is exploring this idea with an AI codec called ScaleNet, which trains two neural networks to pick out the relevant portions of a piece of 8K video and do a "smart" downscaling or upscaling of the content, Bill Mandel, vice president of industry relations at Samsung Research America, said.

If a service provider, for example, wanted to transmit 8K video at 40 Mbit/s using HEVC, Samsung believes it could comfortably shrink that down to 25 Mbit/s with ScaleNet. Likewise, it could take an AV1-encoded 8K stream at 35 Mbit/s down to about 17 Mbit/s, Mandel said.

ScaleNet "makes 8K a lot more reachable for distribution right now," he added. "But it also gives a bandwidth or quality boost to content providers that would want to use this in their normal [work]flow." But the question moving forward is how Samsung will deploy ScaleNet beyond its own ecosystem and distribution partners. "Our intention is to make it accessible to anyone," Mandel said, noting that Samsung is still exploring a business model for ScaleNet on the playback side of the equation.

Harmonic's Fautier said he gives Samsung credit for taking the lead in this area, but said he has also seen some remarkable results in "blind upconversion" of 4K content on some of the newer 8K sets. "I think there are also good alternatives that exist today with blind upconversion with a very good quality," he said. "We might have a good 4K ride for the next coming years."

Sound check
While high octane images are key to 8K, advanced audio is also part of the discussion, according to Scott Smyers, vice president of corporate strategy at Xperi/DTX, a company that's in the process of merging with TiVo.

Smyers said it's critical to ensure that 8K TVs can receive all of the audio content that would go to multiple speakers even if the TV itself was only capable of receiving the signal in stereo. He said Xperi/DTS's has been focused on ensuring that consumers receive all of the audio of a 4K stream today (and 8K down the line) no matter what home speaker configuration they use.

While many of today's home setups are equipped to handle Dolby 5.1, 7.1 or even Atmos, panelists pointed out that NHK in Japan is employing a platform that can deliver 22.2 discrete audio channels. He said DTS has technology in the works that could map that down to Dolby 7.1, 5.1 or even stereo.