Peak usage on US cable networks falls back to Earth

Peak usage levels on US cable networks spiked in early March and have since flattened out and even begun to dip down in recent weeks as stay-at-home orders began to loosen around parts of the country.

That's according to the latest batch of data from the NCTA's COVID-19 Dashboard, which has been collecting and tracking downstream and upstream usage data from several US cable operators for the last three and a half months.

Several weeks into the process it's clear that cable's upstream, boosted in part by the increased use of videoconferencing apps while millions of people worked from home, has gotten a prolonged workout. 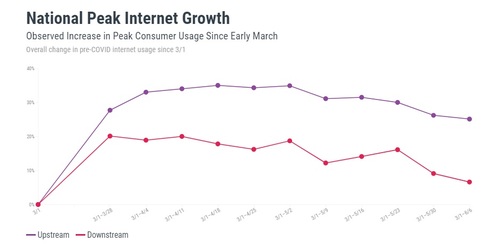 Save for the occasional hiccup, it appears that US cable networks held up during the initial spike and during ongoing usage that continues to hover above pre-pandemic levels.

Cable's upstream still under pressure
Still, the data is a clear indicator that stay at home orders during the pandemic continue to apply pressure on cable's relatively weaker upstream capacity.

US cable operators generally have slowed down or backburned some major projects involving virtualization and distributed access architectures so they can prioritize on the near-term needs. However, peak usage trends during the pandemic and the likelihood that some percentage of people will continue to work at home, is expected to cause some cable operators to accelerate plans to beef up the capacity they have dedicated to the upstream.

Today, most cable operators have upstream built out from 5MHz-45MHz, but industry engineers tell Light Reading that discussions about mid-splits that would push the upstream to 85MHz or a high-split to 204MHz continue to heat up.

Of note, Cox Communications has taken some heat for dialing down upstream speeds to 10 Mbit/s in select neighborhoods temporarily to get a handle on what the operator considers "excessive usage."

Cox noted that it had identified a small number of neighborhoods where overall performance could be improved for all customers by temporarily increasing or maintaining download speeds and altering upload speeds for certain service tiers. A 10 Mbit/s upstream sill offers plenty of pop for the vast majority of Cox's customers, the company said.

Cox said a "small percentage" of nodes were approaching congestion levels prior to the pandemic and then pushed through them during the pandemic as residential network usage quickly climbed. Cox notes that it operates 28,000 neighborhood nodes nationwide and, consistent with the NCTA's findings, 98% to 99% of them have performed with adequate capacity amid pandemic-fueled usage spikes.

"These speed adjustments are temporary while we try to keep as many people as possible connected during the crisis," a Cox official said in a statement. "As always, we're keeping a close eye at the individual node level to make sure we don't approach any congestion thresholds and need to make any adjustments. Similar to our normal process, if we see the network reach or exceed utilization thresholds we will accelerate network upgrade plans in the impacted areas. This could include splitting nodes, pulling additional fiber, equipment swaps and/or core network changes, all of which add capacity to the area."

Comcast also posted an individual update this week, noting that, at the peak of the surge in March and April, it saw traffic jump 30% and as high as 60% in some areas. Videoconferencing on the Comcast network rose as much as 285% and Wi-Fi usage among Comcast's Xfinity Mobile customers climbed about 36%.

"Today, we are seeing declines from the peaks we saw at the height of the surge, and I'm happy to report that our network has thrived throughout its greatest test," Tony Werner, president of technology, product and Xperience at Comcast Cable, said in a blog post that also references the company's ongoing investments in capacity, investments in AI and machine learning to optimize the network.