Peacock launch intensifies the tensions brewing with Roku and Amazon

Peacock and HBO Max offer a vastly different array of content, but the new streaming services from NBCUniversal and WarnerMedia, respectively, do have something important in common  they launched nationally without deals with the two most popular streaming platforms: Roku and Amazon's Fire TV.

HBO Max launched on May 27 and still lacks deals with Roku and Amazon. Following its early preview on Comcast's X1 and Flex platforms, Peacock debuted nationwide July 15 on a sizable group of streaming platforms that likewise did not include Roku and Amazon.

Those scenarios intensify the tensions brewing between major programmers/studios and the top streaming platforms. And the majority of those pressure points center squarely on business-related issues rather than any technology or baseline platform integration challenges. 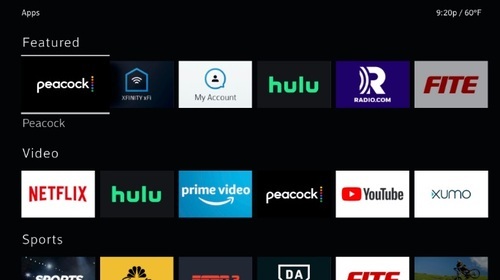 Peacock is getting off the ground with support on several platforms, including X1 from Comcast (pictured), but the new NBCU OTT service has not yet gained entry onto the popular Roku and Fire TV platforms.

Peacock has apps ready to roll for both Fire TV and Roku that could be launched at the "push of a button," according to a person familiar with the situation.

Out of the gate, Peacock is available on a range of platforms, including web browsers, Apple iOS and tvOS devices, Google (Android, Android TV and Chromecast), Microsoft's Xbox One family of consoles, Vizio SmartCast TVs and LG smart TVs. Peacock will arrive on Sony PS4 consoles the week of July 20. Comcast and Cox Communications are offering the ad-supported Peacock Premium service for no added cost on select set-tops and video streaming boxes.

Peacock said it is in talks with other streaming platforms, but isn't predicting when it might hatch deals with Roku or Amazon.

"We think it's important for consumers to know that Peacock is free to use and free to any platform who wants to distribute it," a Peacock official said in a statement. "Consumers have purchased these devices with the expectation they will be able to access all of the apps. The Peacock app is ready to launch across platforms with the flip of a switch, so our hope is that all platforms will do right by their users and carry it. We are in talks with additional partners, but nothing additional to share at this time."

So... what gives?
While it's been standard for streaming platforms to seek a cut of subscription revenues – averaging in the neighborhood of 15%, according to some industry watchers – the demands and asks from Roku and Amazon have been accelerating as they attempt to further monetize their streaming platforms and audiences and further reduce their focus and reliance on hardware sales.

Roku, for example, has also sought out promotional and marketing dollars, content for The Roku Channel (a free, ad-supported video aggregation offering) and advertising inventory on the Peacock streaming service itself, a person familiar with the negotiations said. That advertising ask is a "major sticking point" for Peacock, which, at just five minutes of advertising time per hour, has limited inventory to sell on its own, let alone share, the person added.

That sticking point has apparently extended to HBO Max, which is expected to launch a less expensive, ad-supported version of the streaming service sometime in 2021.

Amazon and Roku are also becoming increasingly focused on deals that support their own apps and streaming service aggregation platforms (Amazon Channels and The Roku Channel, respectively) that, among other things, allow them to assert control over billing and the broader subscriber relationship. Though premium programmers such as HBO, Showtime and Starz played along early on, other big streaming services, including Netflix and Hulu, have given those aggregation plays the stiff arm.

Roku counters that it's not asking for anything out of the ordinary of Peacock, holding that the Comcast, NBCU's owner, is unwilling to share in the advertising spoils it stands to gain atop Roku's shoulders in today's "modern streaming world."

"It's disappointing that Comcast has refused reasonable and standard industry terms and decided not to launch Peacock on Roku at a time when streaming is surging," a Roku spokesperson said when asked for comment on the situation with Peacock. "We want to bring Peacock to our large customer base of avid streamers and know it would benefit greatly from the scale and content marketing capabilities available with distribution on our platform. Unfortunately, Comcast is trying to launch a primarily ad-supported business while refusing to share in the ad model with platform partners. This shows a basic misunderstanding of what drives success in today's modern streaming world where successful publishers collaborate on advertising and achieve strong results by leaning into the unique tools we offer."

Assessing the damage
In the near term, the impasse will likely be more problematic for Peacock than it is for Roku and Amazon, as NBCU's new streaming service, which is basing a sizable piece of its business on advertising, will be absent on two popular platforms that represent the bulk of consumer streaming time.

"As an ad-based service, reach is everything," says an industry exec familiar with the economics of the pay-TV and the video streaming distribution market. "No one is not getting or using a Roku or Amazon device because Peacock isn't there. The same is not true for Peacock."

But, longer term, this could come back and bite Roku and Amazon if these fights continue to escalate. Additional skirmishes could cause more streaming services to sidestep those platforms when renegotiation time comes around and, instead, cozy up to those that are willing to sign off on more acceptable terms.

Roku and Amazon wield material market power now in the streaming world (Roku and Amazon represent more than 80 million "active" accounts between them), but the ongoing tension could make other platforms appear increasingly attractive to major studios and programmers. In turn, that could draw more consumer support for the streaming platforms that do provide access to new premium OTT video services.

Google is rapidly becoming the "most programmer friendly" streaming platform, says an exec familiar with the nuances of these negotiations. "The devices are only as good as the content that's on there."

Colin Dixon, founder and chief analyst at nScreenMedia, said he used to suggest that consumers go with Roku's platform, but has changed his mind amid the recent turmoil.

"I'm telling people to get an Android TV box, because it's an open box. Everybody knows what you need to get on that platform," Dixon said. "Roku and Amazon are trying to force these big providers to deliver their services inside their aggregation plans, and not just as an app on the platform. They [Roku and Amazon] are becoming a bottleneck."

Apple, once known for hardball tactics that chapped programmers and pay-TV distributors alike, is also becoming a friendlier destination. Apple, one of the platforms that does support both Peacock and HBO Max, agreed to stop selling HBO through its own Apple TV Channels platform, something that Amazon and Roku have resisted, according to Variety.

With big corporate backing, HBO Max and Peacock have the luxury to grin and bear these impasses, but Dixon worries that these sorts of standoffs could hamstring smaller streaming services. "They have to take whatever deal Roku and Amazon offers them," Dixon said.