NBCU's Peacock premium streaming tiers to fetch $4.99 with ads, $9.99 without

Peacock is getting ready to spread its wings.

Comcast's NBCUniversal hatched more details about its new Peacock streaming service Tuesday, announcing that the premium version of the offering will launch nationally on July 15 with two paid tiers in tow – an ad-supported version for $4.99 per month and an ad-free version for $9.99 per month – along with an ad-fueled version that will be completely free.

An early preview of the ad-supported premium-level version of Peacock will launch Wednesday (April 15) for no additional cost to Comcast's X1 pay-TV customers as well as on Xfinity Flex, a video streaming/smart home offering targeted to Comcast's broadband-only customers. That move will give Peacock some initial exposure to Comcast's huge US customer base of about 20.28 million residential pay-TV subs and 26.41 million broadband customers.

Speaking on a press call today, Matt Strauss, chairman of Peacock and NBCU Digital Enterprises, said the Peacock app will be phased into the X1 and Flex platforms over the next couple of weeks and will be fully available across both by the end of April. 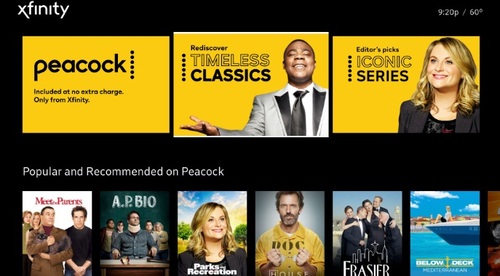 NBCU is also expected to make Peacock available to other US pay-TV distributors. Cox Communications, which syndicates Comcast's X1 platform for its Contour-branded pay-TV service, will make Peacock available to its customers in mid-July. Strauss said discussions with other pay-TV distributors are ongoing and that the intention is to have more on board later this year.

The Peacock app will become available on supported mobile platforms, smart TVs and TV-connected streaming platforms in tandem with the mid-July national launch of the standalone streaming offering. While the national launch remains set for July 15, Comcast is evaluating whether to move that debut up to an earlier date, Strauss said.

NBCU said advertising-supported Peacock content will carry a load of about five minutes of commercials per hour (versus an ad load of up to 20 minutes per hour for traditional TV).

Joining a crowded premium streaming market
NBCU's Peacock will be entering a crowded field of general entertainment, premium streaming services that include incumbents such as Netflix, Amazon Prime and Hulu, and newcomers such as Disney+, Apple TV+, the mobile-focused Quibi service and HBO Max, which will launch next month and start at $14.99 per month.

However, Peacock's multi-pronged approach aims to take different angles into the consumer video market. NBCU intends to bundle the service through partnerships with pay-TV distributors while also offering free and subscription-based standalone versions of the service to cord-cutters.

Strauss said the free, ad-supported version of Peacock is more relevant than ever during the COVID-19 crisis as consumers deal with subscription fatigue and tighten their belts. "Nothing is more affordable than free," he said.

Content slate
The premium version of Peacock will pack about 15,000 hours of current TV shows, including current seasons of "Chicago Fire" and "Blindspot," as well as older catalog fare, including "Law & Order: SVU" and "Friday Night Lights," and Universal movies such as "Jurassic Park" and "E.T." The service will also provide early access to select NBC shows, including Jimmy Fallons "The Tonight Show: At Home Edition" and "Late Night with Seth Meyers" prior to their traditional telecasts on regular TV. 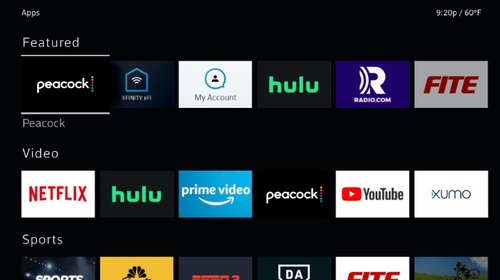 NBCU's Peacock service will live alongside other OTT-delivered apps that have been integrated with Comcast's X1 and Flex platforms.

In addition to providing on-demand access to shows and movies and to help accelerate usage, Peacock will launch with about 20 curated, linear-style "channels," and grow that to about 75 over the next year, according to Strauss. For example, the initial wave of Peacock digital channels will feature news clips and comedy sketches from NBC and Sky News, and genre offerings such as True Crime and 80s Mix Tape.

Peacock will also offer Spanish-language shows from Telemundo; a menu of comedies; "bingeworthy" dramas such as "Battlestar Galactica"; competition series; reality TV shows; kids shows; and a vault of docuseries, including episodes of "Dateline," "Forensic Files" and "American Greed."

Further, Peacock plans to introduce a slate of new original series and films later this year, including "Brave New World," "Intelligence" and "The Amber Ruffin Show," among others, as well a selection of live sporting events (when they return). Peacock was set to feature a trove of live and on-demand content from the Tokyo Summer Olympic Games, which have been postponed to 2021 due to the COVID-19 pandemic.

Strauss noted that original productions have been paused during the pandemic in a way that will "materially limit" Peacock's original slate of originals for 2020. But he expects the service to benefit from an even bigger mix of original fare in 2021.

Jeff Baumgartner 4/14/2020 | 4:18:06 PM
Mum on int'l launch timing As it inches toward the US launch, NBCU had nothing new regarding timing on Peacock's introduction to int'l markets. An obvious early target is the UK and other markets served by Comcast-owned Sky. But also TBA by NBCU is how its content rights stack up in varous international markets given that it might not have streaming rights for its full  US Peacock offering in other parts of the globe. But int'l will have to be part of the plan given the global focus of Disney+,  Amazon Prime Video and Netflix and, eventually, HBO Max. JB
Reply | Post Message | MESSAGES LIST | START A BOARD
EDUCATIONAL RESOURCES