The National Association of Broadcasters announced this week that NAB Show Express, the online replacement of the canceled NAB 2020 event, will take place May 13 and 14 at a web browser near you. 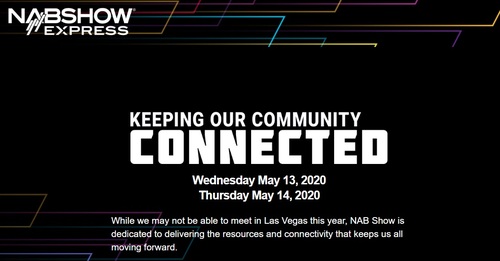 The organization said the free digital event will provide 24-hour access to content developed for NAB Show Express, including more than 100 educational sessions and a state of industry address from NAB President and CEO Gordon Smith.

The digital event will also feature education channels designed to mirror elements of the traditional show, and each to feature eight hours of content that will be accessible on an on-demand basis:

The dates and other details for NAB Show Express emerge less than a month after the organization announced that it would be impossible to reschedule NAB 2020 later in the year after having to postpone the original event because of COVID-19. That prompted NAB to pursue an alternative, culminating in next month's digital event.

Light Reading is also going digital with a session focused on next-gen video streaming that was originally set to run during NAB 2020. That 90-minute virtual event, "Taking Streaming Video the Next Level," is set to start at 11 a.m. ET on Monday, April 20. Registration is free.

Outside the two core days of the digital event, NAB Show Express will also feature three standalone training and exec leadership events. Those events (registration details are to be available soon) include the Executive Leadership Summit on May 11, a free event produced in partnership with Variety; Cybersecurity & Content Protection Summit on May 12, produced with with Content Delivery & Security Association (CDSA) and Media & Entertainment Services Alliance (additional fees apply); and Post | Production World Online (May 17-19), produced in partnership with Future Media Conferences, which also carries registration fees.

Next year's NAB show is currently set for April 10-14 in Las Vegas.