Under the deal, existing Comcast HBO subs will get HBO Max for no additional cost via the HBO Max app and website, accessible with their Comcast credentials. Work is underway to "quickly" bring the HBO Max app to X1 boxes and to Xfinity Flex, a video streaming/smart home service targeted to Comcast's broadband-only customers. New customers will be able to purchase HBO Max directly through Comcast "in the coming days." 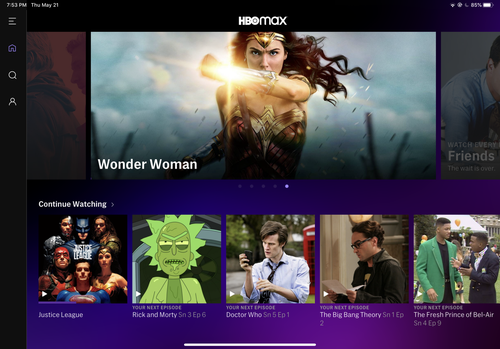 Comcast HBO subs can access the new service for no added cost via the HBO Max app and website. Comcast is working to bring HBO Max to its X1 and Flex boxes.
Pictured is HBO Max on an iPad.
(Image source: WarnerMedia)

More than 60% of Comcast's residential pay-TV base (19.9 million at the end of Q1 2020) is on X1. Comcast recently announced that more than 1 million broadband customers now have Flex, a service that uses a 4K-capable client device that can also be upgraded to Comcast's full X1 pay-TV service.

The new Comcast deal enters the picture as HBO Max, an SVoD service starring at $14.99 per month, gets off the ground today with a library of more than 10,000 hours of content from WarnerMedia's content stable (i.e., DC, New Line, Warner Bros., CNN, TNT, Cartoon Network and the Anime-focused Crunchyroll), but anchored by HBO.

Even with Comcast added to the distribution mix, HBO Max still has some gaps to fill. HBO Max lacks a deal with Dish Network and it currently does not offer an app for the two most popular streaming platforms  Roku and Amazon's Fire TV. However, HBO Max does support several other streaming platforms/devices, including Android mobile and Android TV (Sony Android TV models 2016 and later), Apple (iOS and Apple TV 4K and Apple TV HD), Google Chromecast and Chromecast built-in devices, web browsers, select Samsung smart TVs, and PlayStation 4 and Xbox One consoles.

HBO Max is also being sold on a stand-alone basis through partners such as Google, Apple and Samsung.

WarnerMedia expects HBO Max to have 75 million to 90 million subs worldwide (including 50 million in the US) by 2025. An ad-supported version of HBO Max is expected to launch sometime in 2021.