This time, Fox Corp. has come ashore to acquire Tubi for about $440 million in cash, with the potential for that figure to climb to $490 million in the coming years, as Fox looks to expand on a direct-to-consumer strategy as more consumers flock to various video streaming options. 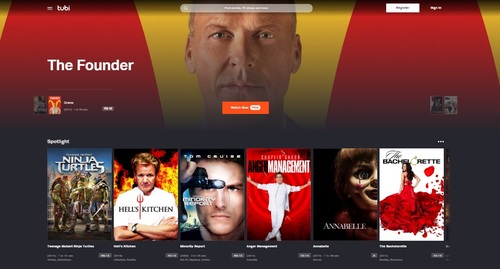 Tubi's says its ad-supported library touts more than 20,000 movie and TV titles through deals with dozens of content partners.

Tubi, which launched in 2014, has raised about $35 million, with MGM and Lionsgate among its financial backers. Tubi's free streaming service is offered on about two dozen digital platforms and touts a library of more than 20,000 movie and TV titles via its 250-plus content partners.

Tubi, which has also integrated its OTT service with Comcast's X1 and new Xfinity Flex platforms, claims that its user base collectively spends more than 160 million hours per month watching the service.

Fox said it plans to run Tubi as an independent service anchored by its licensed content. Fox will also evaluate whether to expand Tubi through new original content as well as from Fox's national and local news and sports programming.

"Tubi provides a substantial base from which we will drive long-term growth in the direct-to-consumer arena," Lachlan Murdoch, Fox Corp.'s executive chairman and CEO, said in a statement.

Fox said it will finance the Tubi deal primarily with net proceeds from the completed sale of its stake in Roku. The deal, which includes up to $50 million more over three years based on deferred consideration and unvested options, is expected to close by June 30.

Why this matters
In addition to strengthening Fox's direct-to-consumer strategy, the deal, which has been rumored for weeks, takes another top free, ad-supported streaming service off the table. The Fox-Tubi deal comes on the heels of Comcast's recent acquisition of Xumo and Viacom's purchase of Pluto TV about a year ago.

Those deals are coming together as consumers continue to gravitate to free streaming services and put even more pressure on an already declining US pay-TV market. Acquisitions of free OTT services are also surging amid a glut of new subscription-based streaming services. Tubi, which focuses on older catalog titles, recently ran a consumer campaign under the "Not on Netflix" theme.

More M&A could be on the way. Last month, The Wall Street Journal reported that Comcast's NBCUniversal was in "advanced talks" to acquire Vudu, the Walmart-owned digital video service that sells and rents movies and TV shows and also runs a free, ad-supported version of the streaming service. NBCU's purported interest in Vudu enters the picture as the media company prepares to launch its Peacock streaming service later this year using a mix of ad- and subscription-based tiers.