New Orleans -- SCTE/ISBE Cable-Tec Expo -- After a period of indecision and infighting that slowed the direction of the next-gen cable access network, the message here is clear that two "complementary" paths will be taken under the uniform banner of DOCSIS 4.0.

Those two paths are Full Duplex DOCSIS (FDX), a technology favored by Comcast, and Extended Spectrum DOCSIS (ESD), an approach that fits well with legacy HFC network techniques that appears to be gaining traction with many other cable operators.

While FDX aims to run both upstream and downstream on the same block of spectrum and require a "node+0" architecture whereby fiber is driven deeper into the network with no amplifiers present between the home and the node, ESD envisions expanding the spectrum ceiling up to and beyond 3GHz (up from about 1.2GHz today) and continues to split the spectrum that is dedicated to upstream and downstream traffic. 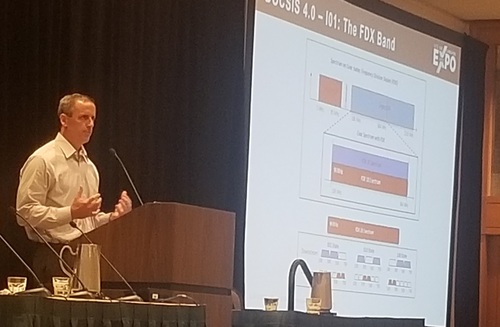 Both FDX and ESD will be included in the developing DOCSIS 4.0 specifications, and are now viewed as complementary, rather than separate, initiatives. Combining those efforts into one spec also has some critical benefits with respect to a scaled ecosystem, as it has become evident that Comcast isn't big enough to drive an FDX vendor ecosystem on its own while the rest of the cable industry likely isn't big enough for a separate ESD-focused effort.

That the cable industry is now on the same page on where to go with HFC next was amplified in comments made Monday morning by engineering execs at the two largest US cable operators -- Comcast and Charter Communications.

The cable industry needs to support both technologies -- it's not an either/or scenario, John Williams, vice president outside plant engineering and architecture at Charter, said today at a preconference event focused on the cable industry's "10G" initiative.

"In order to do this, we need to look at the synergies and embrace ESD and FDX as the next generation of HFC," Williams said. "It's all about scale."

DOCSIS 4.0, he added, also has the "ability to compete with the technologies that are being developed today."

ESD and FDX are a "perfect complementary pair" for the DOCSIS 4.0 specs, Robert Howald, a fellow at Comcast's next-generation access network organization, said during a presentation that shed more light on the MSO's FDX trial activity.

"For now, there's two awesome technologies going into DOCSIS 4.0," Howald added, noting that both ESD and FDX focus on boosting the upstream of the HFC network and will be used together to help the cable network evolve well beyond symmetrical speeds of 10 Gbit/s. "You can see that path converging to 25G."

As for Comcast's FDX activity, Howald referenced a residential trial conducted last year with help from CommScope and MaxLinear in Connecticut, and a more recent one done in Denver focused on more operationally and technically challenging multiple dwelling units (MDUs) scenarios.

"We feel like we've significantly de-risked some of the technology components of FDX," Howald said. "We felt really good about what we saw in the field."

[email protected] 10/2/2019 | 6:05:55 PM
Re: there goes my hopes. Verizon FIOS can not be compared to Centurylink. sorry. I never had a issue with fios at all.  and to NOT go oof topic my point was about symmetrical CABLE docsis 4.0 ;) I hate folks that hijack threads to defend their cable company .  no offense but you sound like a Comcast lover , something not seen in the wild.  bye now
Reply | Post Message | MESSAGES LIST | START A BOARD

Clifton K Morris 10/1/2019 | 10:18:07 PM
Re: there goes my hopes. I used to think the same way when I signed up for Fiber To The House with CenturyLink. But after a month enjoying 200Mb speeds on a gigabit rateplan, I decided to make a service call. The service technician (same person who installed the equipment) didnt even want to step inside the house to duplicate the issue; saying a WiFi test on an iPad was good enough. But I roped him in and showed him on a gigabit Ethernet connection the issue with the speeds. He said Must be the wiring in the house.. I asked, well, you installed the Cat6 cable right..? He ignored me and left and I was charged $75 for that service call.

A month later, I shared this same story with a lady at a conference. She said I had the same problem too! She continued to say that CenturyLink walked her through steps to file a complaint with the Public Utilities commission, down to the color of the buttons on the PUC website she needed to press.

Then she handed me her business card. She was Chairwoman of the PUC.

Point is, Fios and Fiber are still using passive ONT technologies and are subject to bandwidth sharing just like cable. But some companies dont want to invest in sending a technician to fix the problem. Today, Im a happy Comcast customer because I learned Comcast splits the nodes to add capacity wherever it is Feasible and possible. This adds capacity to grow.
Reply | Post Message | MESSAGES LIST | START A BOARD