Comcast says it remains "fully committed" to advancing its Full Duplex DOCSIS (FDX) initiative even as the cable operator has been impelled to funnel and reprioritize a portion of its engineering resources toward more pressing needs during the pandemic.

"Our engineering teams have been laser focused on ensuring that our network continues to deliver exemplary performance to our customers even under the unprecedented demand we're seeing as a result of COVID-19," a Comcast spokesperson said in response to questions about the operator's near-term plans and commitments for FDX. "Still, we remain fully committed to advancing Full-Duplex DOCSIS, as we continue to work with a broad global ecosystem of technology partners on the development of next generation 10G technology."

Comcast confirmed its commitment to FDX amid industry chatter that the cable op has moved to temporarily reassess its engineering priorities to help deal with a surge in traffic on its residential cable network as millions of consumers worked and schooled from home amid lockdown orders. Peak demand on hybrid fiber/coax (HFC) networks in the US started to spike in early March, but has been leveling off in recent weeks, according to the NCTA's COVID-19 Dashboard, which tracks and tabulates data supplied by a handful of cable operators, including Comcast. 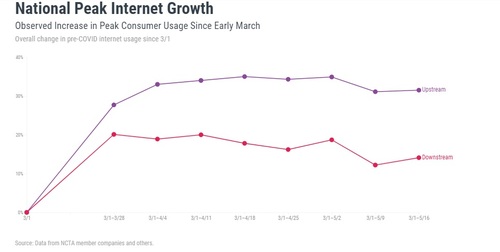 But the initial demand that was placed on Comcast's cable networks in early March caused a temporary "tapping of the brakes" on FDX, an industry source familiar with the situation said. "They can't do everything at once."

Thus far, Comcast appears to be the primary champion of FDX, a technology that enables downstream and upstream traffic to occupy the same block of spectrum while also pushing fiber deeper into the network and eliminating the need to place amplifiers between the node and the home. Most other operators appear far more interested in Extended Spectrum DOCSIS (ESD), an approach that will continue to keep upstream and downstream data traffic separate while also raising the spectrum ceiling to 1.2GHz or 1.8GHz. Cable enginneers have already begun to explore how to extend spectrum to 3GHz on HFC.

FDX and ESD are both supported in the new DOCSIS 4.0 specs (FDX is also an official extension to DOCSIS 3.1), but engineers in favor of ESD view it as a less expensive and less complicated option. It's also not clear yet whether Comcast's commitment to FDX ultimately will encompass its entire cable network or be relegated to a portion of it.

Ripple effects
Another question hanging over FDX is how a temporary shift in Comcast's near-term network priorities might ripple into the vendor community.

Comcast hasn't announced the full set of companies that are working on its FDX project, but multiple sources say Intel Corp. is among those closely involved. According to the sources, Intel has been working with Capacicom, an Israel-based startup, to help develop software for remote PHY/remote MACPHY chips. According to a person familiar with the work that Intel and Capacicom have underway, they've been developing an initial FPGA (field-programmable gate array) for FDX-capable remote PHY devices and exploring plans to develop second-gen ASICs. Per this web page, Capacicom is also a partner of Analog Devices, a maker of amplifiers and other cable network products.

Analog Devices has been helping out with the analog-to-digital and digital-to-analog conversion aspects of the project, but "Intel is the project manager on this," said a person familiar with the project who views FDX as a promising, yet complicated, technology.

However, some of the near-term uncertainty related to the pandemic has caused Intel to pull back some funding on the project, multiple industry sources said. That decision could put Capacicom at risk.

Capacicom declined to comment when asked about its specific activities involving Intel or FDX products. However, CEO Daniel Wajcer did offer this general comment: "We are carefully considering if and how to continue in the cable business."

There's evidence of an Intel-Capacicom connection hiding out in the open. According to this Cisco blog post from January 2017, Intel and Capacicom teamed up to provide a remote PHY device (RPD) for a remote PHY "plug-fest" hosted by CableLabs.

Intel is in the process of selling its home connectivity unit to MaxLinear for roughly $150 million. That piece of Intel's business is focused on DOCSIS and Wi-Fi silicon for set-tops, gateways and other types of consumer premises equipment (CPE) and is not associated with the group working on network-side FDX silicon or another group at Intel focused on supplying compute for the Generic Access Platform (GAP), an emerging SCTE/ISBE standard for cable network node housings and snap-in service modules.