CableLabs preparing to take DOCSIS 4.0 to the test

After publishing the new DOCSIS 4.0 specs today, CableLabs is already moving ahead with plans to test equipment and software that utilize the new technology.

Colorado-based CableLabs is pulling together a group that will kick off those testing efforts next week, with an expectation that interops will get underway for network amplifiers, passive devices and taps later this year, Doug Jones, principal architect at CableLabs, said Thursday. Jones spoke on a "LiveLearning" webinar from SCTE/ISBE in partnership with Light Reading focused on the Extended Spectrum DOCSIS (ESD) option for DOCSIS 4.0.

As envisioned, DOCSIS 4.0 will enable MSOs to move toward speeds of 10 Gbit/s downstream (doubling the 5 Gbit/s supported by current D3.1 technology) and up to 6 Gbit/s in the upstream on their widely deployed hybrid fiber/coax (HFC) networks. The specs will also support new low-latency and enhanced security capabilities. 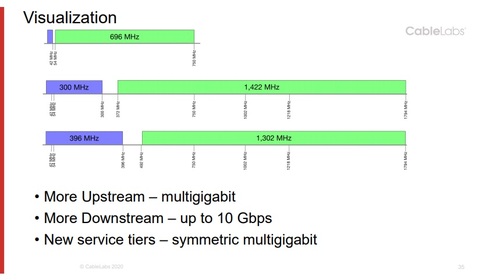 This slide illustrates how cable plant built out to 750MHz today (the example shown at the top) could expand capacity by raising the spectrum ceiling to 1.8GHz and also utilize new splits that would vastly expand the amount of spectrum dedicated to both downstream traffic (shown in green) and upstream traffic (shown in purple).
(Source: CableLabs)

Today's webinar focused on ESD, an option for DOCSIS 4.0 that will continue to split spectrum dedicated for downstream and upstream traffic as it is today, while also enabling operators to raise the spectrum ceiling to 1.8GHz (versus the 1.2GHz supported in DOCSIS 3.1) and expand the amount of capacity used for the upstream. DOCSIS 4.0 also supports Full Duplex DOCSIS, a path favored by Comcast that would allow upstream and downstream traffic to occupy the same block of spectrum.

Jones, a DOCSIS pioneer who has been involved with the technology since 1996, said the new specs show that HFC still has plenty of life left. "Coax is not done," he declared.

On that note, the cable industry is already fast at work on future tech that would support the lifting of the spectrum ceiling to 3GHz. SCTE/ISBE, the industry's standard-setting group, has already got working groups and committees set up to work on updates and standards for 1.8GHz and 3GHz network passive and actives devices. SCTE/ISBE is also working on a new 3GHz hardline tap housing standard that would allow MSOs to swap in a 3GHz faceplate without having to remove and reinstall the base housing.

The 3GHz tap standard is "moving very fast," and a standard is expected within months, Dean Stoneback, senior director of engineering at SCTE/ISBE, said.

Cable ops sizing up DOCSIS 4.0 plans
Network components, such as passives, amplifiers and nodes, will be part of the initial wave of products based on the new specs as cable operators start to think about how to seed their networks for DOCSIS 4.0. D4.0 modems and gateways will come on the market later.

Cogeco, a Canadian cable operator, is already starting to evaluate scenarios in which it would upgrade to 1.8GHz using the ESD path of DOCSIS 4.0, It's also weighing a shift toward distributed access architectures (DAA) and node splits, moves that could play a role in an eventual migration to fiber-to-the-premises, Robin LaVoie senior director of network evolution strategies at Cogeco, explained.

However, that evaluation, which will take a look at elements such as overall costs and capacity requirements over time, won't cover every part of the network in every service area, but will instead be done on a "node-by-node basis," LaVoie said.

At the same time, he does expect Cogeco to start deploying amps and passives within the next calendar year to help start the MSO along the DOCSIS 4.0 path.

Mediacom Communications, a US-based mid-tier cable operator, has DOCSIS 3.1 deployed across the board, and is "definitely looking forward to 4.0," JR Walden, CTO and SVP at Mediacom, said.

About 99% of Mediacom's plant is built to 750MHz. "This extended spectrum solution is, in some ways, custom-made for our kind of situation," Walden said, noting that FTTP deployments are largely relegated to greenfield scenarios. "This is a much more cost-effective way to grow the network  The speed at which we can deploy this and make it available to customers is a huge advantage over some of the other [options]."

Walden said Mediacom might look at the Full Duplex path for DOCSIS 4.0, which is anticipated to be more expensive and time-consuming than the ESD option, in certain situations. One example could be small businesses that need symmetrical speeds, he said.

Suppliers are also eager to play a part in the early stages of DOCSIS 4.0.

"The key to this is it's an evolution, not a revolution," Colin Howlett, VP of architecture at Vecima Networks said. He noted that 1.8GHz passive devices are already starting to become available, with 1.8GHz amplifiers and next-gen nodes expected to follow.

Those will all be part of the first phase, as DOCSIS 4.0 assumes a distributed access architecture, Howlett said.

CableLabs' Jones, who is tasked with cultivating the silicon ecosystem for DOCSIS 4.0, said ten chipmakers are already involved with the new specs, a group that includes both traditional and new suppliers. "We don't know their roadmaps yet, but they are working on their product plans," he said.