Striking down accusations that it is not negotiating in good faith with Altitude TV, Dish Network has come forth with an open offer that essentially would make the regional sports network (RSN) available to its satellite TV and Sling TV customers on an à la carte basis.

"The claim that we are not negotiating in good faith is untrue. We have made multiple proposals that are fair to Altitude, Colorado sports fans and the overwhelming majority of our customers who don't watch Altitude," Andy LeCuyer, SVP of programming for Dish, said in a statement emailed to Light Reading. 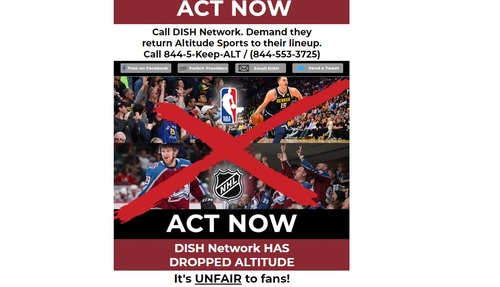 Altitude has urged local sports fans to act after its deal with Dish expired last August.

Dish's deal with Altitude, an RSN that provides local coverage of the NBA's Denver Nuggets and the NHL's Colorado Avalanche, expired last August. Billionaire Stanley Kroenke has ownership ties to Altitude as well as the Nuggets and Avalanche.

LeCuyer claims that Dish has offered a "variety of creative solutions" to resolve the carriage dispute, and that all have been rejected by Altitude. "The last proposal we made, delivered in October, has been greeted with silence," he added.

According to Dish, the current offer on the table is to:

"This is a fair deal. Fans get the best television experience available on DISH or Sling TV at a price set by Altitude," LeCuyer added. "Customers who don't watch it won't have to pay for it."

A Dish official told The Denver Post that less than 10% of its satellite TV subs watched Altitude when it did carry the RSN.

Altitude has previously argued that offering the RSN on a standalone basis, rather than as part of a more broadly distributed basic pay-TV package, is not financially viable. Altitude also is not interested in being carried on a sports tier, and has stressed that it has so far been unable to strike distribution deals with various virtual multichannel video programming distributors (vMVPDs) such as YouTube TV and Hulu.

Altitude is also balking at Dish's a la carte-focused proposal. "There's not a single regional sports network in the country that will take an at-will deal like that," Altitude spokesman Tom Philand told The Denver Post. "It's a death knell for the RSN [regional sports network] business."

Comcast lawsuit could drag on for months Altitude's carriage deal with Comcast also expired last fall. In the wake of that impasse, Altitude filed a lawsuit against Comcast on antitrust grounds, alleging that Comcast is attempting to drive Altitude out of business and possibly seize on an opportunity to take over the local sports TV market with its own RSN. Unless a settlement is reached or a new carriage deal is struck, that case could drag deep into 2021 and possibly threaten local coverage of next year's regular season of both the Nuggets and Avalanche.

The spat is drawing lots of attention as it surfaces amid a broader shift in the US pay-TV landscape and how expensive sports channels are bundled and sold. It highlights a major rift between an RSN and the nation's largest pay-TV distributor at a time in which video service providers are facing a growing cord-cutting trend and trying to move higher-priced sports channels from basic bundles to separate tiers tailored to sports fans who are willing to pay for them.

Altitude goes over-the-air
Meanwhile, Altitude, which did manage to strike a new deal with AT&T in late October, is trying out other ways to deliver games to local fans.

This week, Altitude announced that it will broadcast the Denver Nuggets game against defending champ Toronto Raptors on March 1 via local Denver broadcaster KTVD Channel 20. It will follow with a broadcast of the Colorado Avalanche-Detroit Red Wings matchup on March 2, also on KTVD.

Altitude noted that it was able to secure this temporary carriage on a local broadcaster with the blessing of AT&T. "We applaud DIRECTV for being a team player and allowing KTVD to televise these pivotal matchups as we enter the home stretch of this season," Altitude said.