US pay-TV subscribers continue to flee with each passing quarter, but it's also becoming clear that subscription VoD services must concern themselves with churn as consumers tighten their belts and trim back what they are paying for video streaming services.

According to TiVo's Q1 2020 Video Trends Report, about 21% of pay-TV subscribers and 11% of broadband-only customers have excised an SVoD service within the past six months. Boiled down further, about 5% of TiVo users have removed or reduced a subscription service during the March-April 2020 timeline. 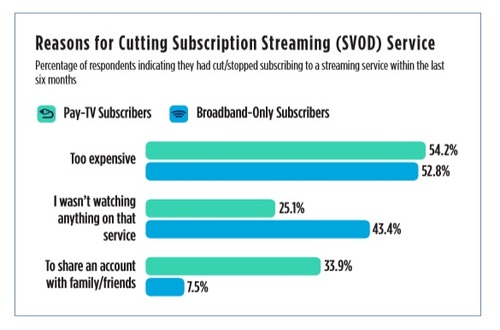 But overall SVoD adoption is still on the rise. TiVo also found that 74.6% of respondents used at least one subscription VoD service, up from 69.5% in 2019. Some 52% of respondents said they were "very satisfied" with SVoD, up 3% year-over-year, compared to just 39% for virtual multichannel video programming distributor (vMDPD) services such as Sling TV and YouTube TV, also up 3% YoY.

Ad-based VoD streaming services are also seeing strong momentum. More than half of survey respondents said they are not interested in paying more for ad-free fare, and 26.3% said they'd pay more for an ad-free experience. Several existing and emerging SVoD services, including CBS All Access, Hulu, NBCU's Peacock and Quibi, support both modes and charge a premium for the ad-free tier. HBO Max is starting out ad-free, but intends to introduce a cheaper ad-supported version in 2021.

On the more traditional pay-TV end of the ledger, 10.7% of respondents said they canceled pay-TV service in the last six months, with high prices being the primary reason. 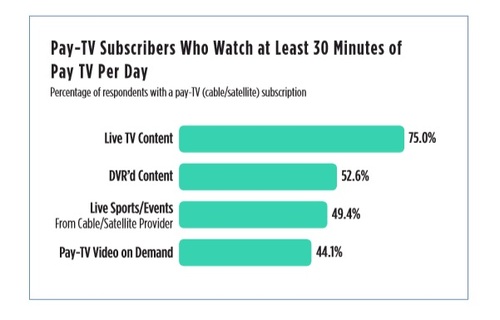 About 12.7% said they intended to cut pay-TV in the next six months, though half of that group said they plan to nove to a different service provider, and 38% said they will likely go with a vMVPD.

As for "pay-TV loyalists" that are sticking around, 54.6% said they remained happy with the service, 20.4% said it's too much of a hassle to change and 16.6% said they are staying because they believe they can't get all the entertainment they want if they cancelled service.

TiVo, which is now merged with Xperi, also presented an initial glimpse at how the market has changed during the pandemic. Among its own user base, TiVo saw a 58% increase in viewership in the first week of major COVID-19-related lockdowns, with daily viewership of pandemic-related titles surging by 600%.

By the first week of April, on TiVo devices, Amazon weekend viewership had jumped about 80% from pre-COVID levels, while HBO Go viewing increased by 80%, Hulu usage climbed 36% and Netflix usage rose 33%.