Comcast's cable business is expected to be resilient during the COVID-19 pandemic and also serve as a "backstop" against tough times at the company's NBCUniversal and Sky units, a top industry analyst concluded.

"It's good to be Cable, one of the strongest and most resilient businesses one can name in this kind of environment," Craig Moffett, analyst with MoffettNathanson, explained in a new Comcast report issued Monday. "It's not good, however, to be Media, one of the most cyclical and exposed businesses around."

Although the complexities of Comcast's overall business present challenges of their own, the biggest problem facing it in an era of COVID-19 is the dichotomy between its cable and media operations, Moffett explained. But despite the range of recession scenarios facing Comcast across the board, he still believes the company remains undervalued.

"The Cable business should provide a strong backstop against a deteriorating picture at NBCU/Sky," Moffett wrote.

Comcast's non-cable businesses – the tough half of the dichotomy – represent about half of the company's pre-recession revenue. For full-year 2020 at Comcast, Moffett is currently forecasting a revenue decline of 3%, an EBITDA decline of 15% and an earnings per share decline of 30% across Comcast. 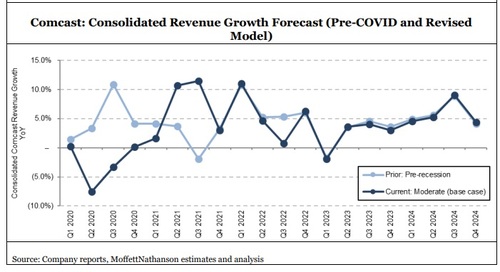 The pandemic is hurting NBCU on several fronts, including park closures, the shutdown on TV and movie productions and movie houses, and the postponement of the Tokyo Olympics to 2021, as well as accelerated cord-cutting that is also carving into affiliate and retrans fees. While the option of a direct-to-consumer model for theatrical releases will provide some help and represents an area in which Universal is positioned to manage reasonably well, that transition likewise will be "choppy," Moffett noted. "That said, near-term results could be brutal" for the studio.

Meanwhile, Sky, the UK-based unit acquired by Comcast in the fall of 2018, is a headache to deal with during a sports blackout that removes critically important content from Sky's slate. Sky Sports, for example, is giving subscribers the option to pause their subscriptions until live sports returns to the air.

The silver lining, the analyst points out, is that the market was already valuing either Sky or NBCU "at less than zero" even before the pandemic.

"When we finally upgraded Comcast to Buy a few months ago (unfortunately, only a month before the COVID-19 crisis), we argued that the challenges at NBCU/Sky simply didn't matter," Moffett wrote. "The intrinsic value of Cable more than compensated for the headache; you were getting NBCU and Sky for less than half a turn of EBITDA. That feels like a lifetime ago. And yet, it's still pretty much true."

That said, Moffett retained his "Buy" rating on Comcast, but lowered his price target to $43 (from $54) due to the recessionary effects expected from the pandemic. Comcast shares were down 61 cents (1.60%) to $37.47 each in Monday morning trading.

Sizing up COVID-19's impact on Comcast's cable biz
Although Comcast's cable business will offset some of the problems that NBCU and Sky are facing during the pandemic, that part of the business is not totally inoculated from the threat either.

"No business will be unaffected by a recession and unemployment of the magnitude expected in the current recession," Moffett wrote.

As is the case with pure-play cable operators such as Charter Communications, Moffett believes Comcast's cable business will grapple with slower broadband subscriber growth (or perhaps go negative in Q2) while the market stagnates as people stay put alongside a slowdown or reversal in new household formation. He also expects an acceleration of pay-TV cord-cutting, which will actually boost broadband ARPU as consumers transition to pricier unbundled high-speed Internet service. The recession is also expected to negatively impact commercial services and slow the growth of cable mobile subscriptions.

Moffett put together a range of scenarios for Comcast's cable business based on the severity of the recession.

Comcast is scheduled to post Q1 2020 results the morning of Thursday, April 30.