Comcast has teamed with Technicolor to build a next-gen DOCSIS 3.1 gateway called the XB7 that will support up to 2.5 Gbit/s, a huge leap over the cable operator's current-gen, 1-Gig-capable XB6 gateway.

Details about the XB7 and its 2.5Gbit/s LAN port appeared on the DSL Reports message board, which noted that the Technicolor-made device recently appeared at the FCC for testing. Comcast also has a web page hiding out in the open with additional details about the XB7. 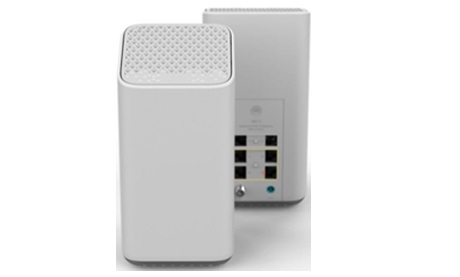 Billed as a third-generation gateway, which carries the model designation of CGM4331COM, the XB7 supports dual-band 802.11ax (WiFi 6) and is equipped with four Gigabit Ethernet ports, two telephone ports and MoCA 2.0, a coax-based home networking platform that handles data speeds up to 1 Gbit/s. The XB7, which also sports Zigbee and Bluetooth LE (low energy) radios, is compatible with Comcast's xFi smart home/WiFi management platform and the Xfinity Home security/IoT service. Per Comcast's page about the XB7, the 2.5-Gig gateway has a grey/white color scheme compared to the black-colored XB6, as well as a "less disruptive LED light."

That tech configuration is a step above the XB6, a device outfitted with two Gigabit Ethernet ports, 802.11ac WiFi, integrated IoT radios and a maximum data throughput of 1 Gbit/s.

In field trials
Comcast has not announced rollout plans for the XB7. But the post on the DSL Reports board noted that the operator is currently testing the device in its northeast division, with plans to extend testing to other divisions ahead of an expected national launch in 2020. A source within Comcast said the company is conducting field trials of the XB7 but did not provide market-specific details.

A closer look at the backside of the XB7.

If Comcast follows the path it took with the XB6, the Technicolor-made version of the XB7 likely uses silicon from Broadcom. If Comcast opts to source the XB7 from a second supplier, the most logical candidate is CommScope/Arris, which currently makes a version of the XB6 gateway with Intel's DOCSIS 3.1 chipsets.

New gateway could open up faster broadband services
Comcast's new gateway is a signal that the operator is preparing to support faster speeds on its widely deployed DOCSIS 3.1 network and on the customer's home network.

Currently, Comcast's top residential DOCSIS 3.1 speed tier delivers 1 Gbit/s downstream and 35 Mbit/s up. A 2.5-Gig device would allow Comcast to take fuller advantage of the capabilities of DOCSIS 3.1 -- a fully loaded D3.1 modem is capable of supporting up to 5 Gbit/s downstream and 2 Gbit/s in the upstream. The DOCSIS 4.0 specs under development at CableLabs are targeting speeds up to 10 Gbit/s. CableLabs has also developed low-latency capabilities that could be applied to devices for DOCSIS 3.1 and the forthcoming DOCSIS 4.0 specs.

Speaking on a panel session at the Cable-Tec Expo conference in New Orleans in early October, Tony Werner, Comcast's president, Technology, Product and Xperience, did mention that Comcast plans to introduce symmetrical 1Gbit/s service on its current DOCSIS 3.1 platform. The XB7 would seem to fit the bill.

While the XB7 would be capable of supporting broadband services delivering 1-Gig or more, a person familiar with the new product noted the new gateway might also be appealing to online gamers who desire a blend of raw speed, high-quality in-home WiFi and low latency.