Comcast is developing a hands-free remote equipped with a far-field microphone that works with its X1 platform, but the cableco is non-committal on whether such a product will make it to market.

The hands-free device, referred to as model XR19-RQ, popped up at the FCC earlier this month in a filing by Remote Solution Co. Ltd., a remote control tech company based in South Korea. Janko Roettgers, a senior reporter at Protocol who is late of Variety and Gigaom, was the first to spot it:

Interesting: Comcast has built an Xfinity IR blaster with integrated far-field mics, or as the company likes to call it: a hands-free remote https://t.co/Dv9chp8BJx pic.twitter.com/hHGGFMdjZ0

For now, Comcast isn't saying much about its plans for the device. Comcast, a company official said, explores a wide range of smart home technologies, but stressed that there's nothing to announce concerning when or if the company would launch a hands-free remote such as what recently passed through the FCC.

The FCC filing provides some detail, including images of the device and a user's manual.

The new voice remote being developed by Comcast would support both far-field, hot-word activated voice commands as well as a manual, button-based use case.

According to that documentation, the hands-free remote would work in tandem with an X1 set-top client (connected by IR, Bluetooth LE 4.2 and far-field voice control) and enable the customer to keep the microphone open or closed or actively open and close it by pressing a physical button. When in far-field mode, the device is set up to activate functions when a customer utters the hot-word phrase, "Hey, Xfinity..." and follows with a specific command (such as telling the device to tune the X1 box to a specific channel, search for a movie or TV title, or perhaps access a smart home function). 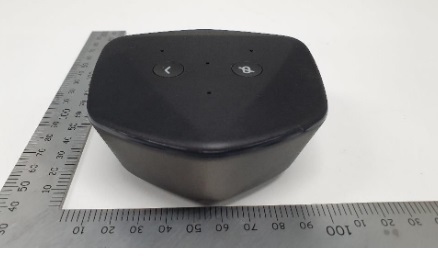 Another view of the product in development.

The move into far-field voice navigation and IoT tech would also place Comcast into a smart home product category that today is dominated by Amazon (Alexa) and Google (Google Assistant), which make smart speakers and have already integrated those capabilities into their various video streaming platforms (Fire TV and Android TV).

Altice USA has already gotten into this game with Altice Amplify, a high-fidelity home speaker made by France-based Devialet (in tandem with Sagemcom) that works with the MSO's Altice One all-services hub and is powered by Amazon's Alexa Built-in technology.

Meanwhile, cable CPE companies, including Humax, CommScope and Sagemcom, are starting to develop these sorts of products. Earlier this week, Humax, for example, introduced the 4K Soundbox, a connected soundbar with an integrated microphone for far-field voice recognition that can be integrated with a set-top box. Humax's new soundbar uses the Reference Design Kit, an open source platform managed by Comcast, Liberty Global and Charter Communications.