Comcast has quietly more than doubled the storage capacity of its cloud DVR product for X1, raising it from a mere 60 hours to 150 hours per sub.

Per this updated FAQ, Comcast began to beef up cloud DVR storage for its Xfinity Stream app and Xfinity Stream web portal at the end of April and was on track to complete the rollout sometime this month. 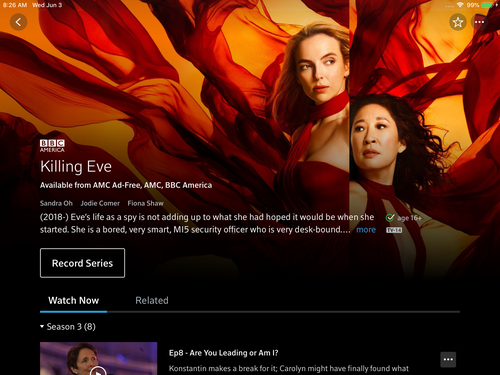 Comcast's Cloud DVR service for X1 is integrated with supported mobile and TV-connected streaming platforms. Pictured is the Xfinity Stream app running on an iPad.

The storage expansion comes several years into the deployment of a cloud DVR platform that is now woven into Comcast's X1 pay-TV platform. Comcast started to test its cloud DVR in Boston and Philadelphia back in mid-2013 ahead of a broad commercial rollout. Today, the vast majority of Comcast's 19.90 million pay-TV subs are on X1. The cloud DVR service is available for no added charge to X1 customers that are already paying for a regular DVR.

Update: Cox added an "Ultimate DVR Service" in the fall of 2019 that allows customers to record up to 24 shows at once along with 1,000 hours of storage. Per this web page, the Ultimate DVR offering costs $29.99 per month. Cox also markets less expensive DVR options that record fewer concurrent shows and provide less storage.

While Comcast's cloud DVR was a novel addition when the product was first rolled out years ago  building on the set-top-based remote-storage DVR initially deployed by Cablevision Systems (now Altice USA) in 2011  cloud DVRs are more commonplace in US pay-TV, particularly among virtual multichannel video programming distributors. Traditional pay-TV providers have migrated to cloud DVRs to help cut down operational and capital expenditures when compared to legacy set-tops with local storage DVRs while also enabling service providers to bring DVR capabilities to devices bought at retail.

But there are also lots of variances between cloud DVR products from provider to provider. Here's a snapshot of how some of the other options on the market currently stack up:

Among traditional cable ops, Charter Communications has also launched a two-tiered cloud DVR product available to customers who do not use operator-supplied receivers and/or are subscribed to services such as Spectrum TV Stream, Spectrum TV Choice and Spectrum TV Essentials. Charter's baseline cDVR costs and additional $4.99 per month (for recording up to 50 shows, saved for up to 90 days) and the cDVR Plus service fetches $9.99 per month (for up to 100 shows, saved for up to one year).

The cloud DVR for Altice USA's Altice One platform lets customers record up to 15 shows at once.