An Android TV-powered streaming device appears to be playing a big role in the revamped version of TVision Home, T-Mobile's pay-TV product.

Per documents at the FCC first spotted by 9to5 Google, China-based SEI Robotics put forth a remote control for Android TV sporting branding for TVision and button shortcuts to the TVision service. While a new TVision-branded box has yet to surface, the FCC documents for the remote clearly show it's for Android TV. 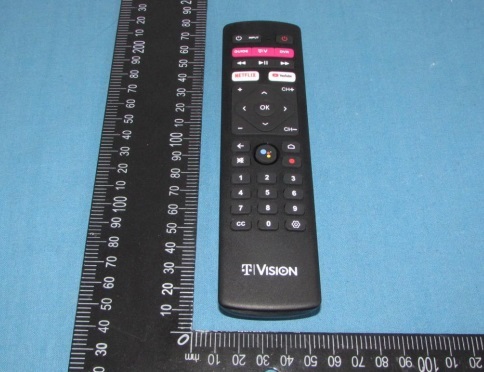 The FCC documents offer a bit more evidence about T-Mobile's next-gen plans for TVision, a pay-TV service rooted to T-Mobile's acquisition of Denver-based Layer3 TV in early 2018. The legacy version of TVision developed by Layer3 TV uses a more traditional set-top/client platform made by CommScope/Arris for its IP-based video service. 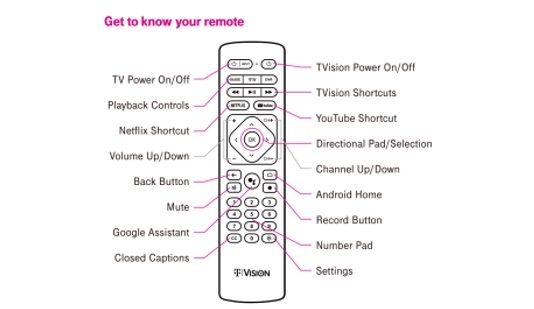 This document shows the button labeling, including those for Android-based functions, for the new TVision remote.
(Source: FCC)

T-Mobile has not shed much light on how the revamped version of TVision will take shape and precisely how mobile will be playing a greater role in it. However, the FCC filing is an indicator that T-Mobile will be relying in part on the Android TV Operator Tier, a platform that several other telcos and cable operators, including AT&T and WideOpenWest, are using for their next-gen video streaming platforms.

In addition to integrating and supporting a wide range of third-party apps via Google Play (the new TVision remote sports buttons for YouTube and Netflix, for example), devices that use the Android TV Operator tier can be made to boot up to the service provider's branded pay-TV/video app. It's not yet clear if the new TVision service will only be offered in the home on a T-Mobile-supplied Android TV box or if T-Mobile also intends to develop other versions of the TVision app to run on retail devices from the likes of Roku and Amazon (Fire TV).

MobiTV also works with multiple Android TV box makers, including Amino Communications, Kaon, Arris/CommScope and Sagemcom. MobiTV and T-Mobile haven't announced a formal partnership. However, Bill Routt, president and COO at MobiTV, shed some light on MobiTV's model last year, telling Light Reading that it's based on an up-front fee for the initial integration work (including a check on the partner's in-home video rights), plus a monthly license fee (that fee includes the TiVo intellectual property), but does not require a subscriber minimum.

Industry sources have said that T-Mobile has deemed the new TVision as "tech-ready." They also stressed that T-Mobile has delayed the launch to later in 2020 due to the pandemic that caused closures of some retail stores, which are among the channels T-Mobile plans to emphasize for sales and distribution of TVision.

But, as AT&T has done with its new Android TV-based AT&T TV service, the telco is relying heavily on a self-install model that, presumably, T-Mobile should also be able to take advantage of when it does introduce an Android TV-powered version of TVision.

Meanwhile, recent T-Mobile filings at the SEC hint that the company's plan for TVision does not center on using pay-TV as a standalone product but rather as a service it can bundle with in-home broadband services that take advantage of the enhanced spectrum position T-Mobile got from the Sprint merger.