Xperi's acquisition of Vewd aims to accelerate the company's pursuit of the smart TV market. And that platform-based approach is expected to cover the retail angle, as well as lead to the development of connected TVs that operators can distribute directly to their broadband and video customers. 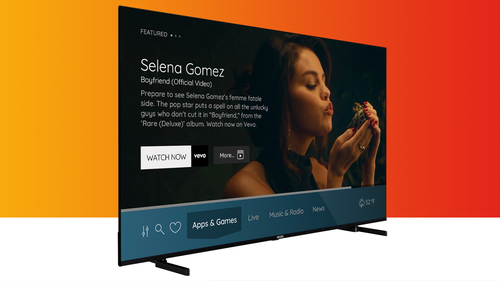 Xperi, which merged with TiVo in 2020, is eager to explore the potential of "Operator TV," a program Vewd introduced last fall in partnership with Vestel, an original design manufacturer (ODM) and a major supplier of TVs for Europe with brand partners that include Panasonic, JVC, Hitachi and Toshiba. Vestel also works with a range of more localized brands in the region, such as Finlux (Scandinavia), Telefunken (Germany) and Bush (UK).

The general idea of Operator TV is to provide operators with a way to support and deliver pay-TV services and integrated streaming offerings to customers via a connected TV rather than relying solely on separate set-top boxes or streaming dongles.

Sky, the UK-based service provider owned by Comcast, has taken that angle with Sky Glass, a family of smart TVs powered by the company's global streaming platform. Taking a page from the smartphone market, Sky lets customers buy the Sky Glass sets in monthly increments and allows those customers to swap out their TVs for new, upgraded models later on.

Vewd hasn't announced a lot of specific details about the Operator TV program. But Vewd CEO Aneesh Rajaram, who is staying with the company post-merger, told Light Reading last fall that he expected the program to supply operators with multiple options, including the ability to sell white-label smart TVS under their own branding (like what Sky is doing), or to offer TVs from Vestel's mix of TV brand partners.

"I think Operator TV is a very interesting concept and idea," and one that could fit in well with TiVo's business relationships with pay-TV operators, Skaaden said. "We're still very bullish on video-to-home over broadband to different form factors around the world. We certainly see that [Operator TV] product idea as a key catalyst for future growth."

While Europe would likely remain the initial focus for anything further to come from Vewd's original Operator TV play, there's potential for it to take hold in multiple regions.

"I could also see it extended to the US and other markets such as Latin America," Skaaden said.

More broadly, Xperi expects the Vewd deal to help break its way into the smart TV market with a richer OS/platform than the company might be able to get out the door in the early going. In addition to the TiVo OS for smart TVs work already underway, Xperi believes Vewd's TV app framework, its core middleware and its experience in onboarding content across multiple, sometimes fragmented regions will help to flesh out the full tech stack.

"When the vision is to combine linear TV and a streaming offering, you need to comply with local standards, local streaming regulations, and Vewd had some really strong assets in that respect," Skaaden said. "There's a lot of complementary elements [from Vewd] that we believe can accelerate time-to-market in a big way."

Xperi now expects to have its first TiVo-based products for smart TVs in the market in 2023. Skaaden said that could mean a tightening of Xperi's original timeline by about three to six months.

While that's not a massive change from Xperi's initial plan to launch a TiVo OS in a connected TV in late 2023 or early 2024, Skaaden said the Vewd deal will enable the company to "go in early with a much broader offering than what was originally in the plan ... When we think about our longer-term plan, there's a meaningful level of acceleration."

In addition to establishing Xperi as a top independent streaming media platform that can connect with TV manufacturers, the company sees a similar opportunity emerging with connected cars.

Xperi's automotive business has been largely audio-based and radio-focused, but the company sees Vewd's focus on a video app framework for Linux and Android connected car platforms as a good fit.

"We clearly see increased demand from automakers for video or broader media offering beyond audio," Skaaden said. "We believe this [acquisition] will accelerate our market entry for a more complete audio and video solution."