It's a question as old at DOCSIS 3.0: What kinds of services and applications actually need 1-Gig speeds?

Certain business-class services fit the bill, but there still aren't many residential use cases that require 1-Gig speeds, even among a sizable swath of the population that's been largely working from home for the past 19 months because of the pesky pandemic.

Despite some stress on the upstream that was cause for some nervousness, the cable network, led by DOCSIS 3.1, was largely up to the task. And, these days, operators are starting to pursue "mid-split" and "high-split" upgrades that beef up the upstream and put D3.1 networks in position to deliver symmetrical gigabit speeds. 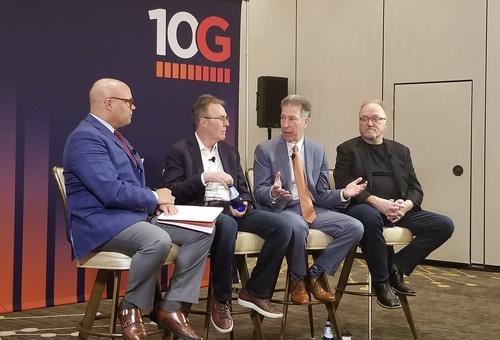 Next up is DOCSIS 4.0, a new set of CableLabs specs that will support multi-gig symmetrical speeds, low latencies and enhanced security capabilities on the widely deployed hybrid fiber/coax (HFC) network.

And linked to that is "10G," a broader cable industry initiative introduced in 2019 that's focused on symmetrical 10-Gig speeds, low latencies and enhanced security on a wide range of access networks  HFC, fiber-to-the-premises (FTTP) and even wireless.

1-Gig cable networks, at least in downstream direction, are already pervasive: data from the NCTA – The Internet & Television Association shows that more than 80% of US homes currently have access to speeds of at least 1-Gig. There's still no telling exactly when 10G networks will be built out, but the cable industry is clearly heading down the path. But when that day comes, what are people going to do with those networks, and what will the "10G" future look like?

The bottom line is that no one really knows. But it's a question that will be explored with the 10G Challenge, a contest announced in October that will award more than $300,000 in cash prizes in the pursuit of gigabit-worthy ideas and technologies from companies, inventors, students and entrepreneurs.

Judging for the '10G Challenge' will get underway next July, and winners will be notified sometime in August 2022.
Click here for a larger version of this image.
(Source: CableLabs)

"We want to put our money where our mouth is," Phil McKinney, president and CEO of CableLabs, explained at a recent press event about the 10G Challenge. "We want to encourage innovators to think about what would they do, or what could they do, with these gigabit networks."

McKinney characterized the 10G Challenge cash awards as a non-dilutive grant. "Prototype your idea. Do something with it. Take it forward," he said. "Show off what you can conceive and what you can come up with that takes advantage of these networks."

CableLabs has taken a stab at some ideas via a series of videos that try to envision what the future will look like, and how that future will impact the network, three to eight years out. Some ideas and concepts brought forth included holographic images, light field displays, home health care, advanced uses of virtual and augmented reality, and technologies and services that enable "aging in place."

All of those examples do require high capacities, low latencies, and, in some cases, lofty levels of security. But certainly there's more ideas to explore and mine.

Despite all of the mockery heaped upon Facebook for changing its corporate name to Meta, the move has spawned a multitude of stories billing the "metaverse" as The Next Big Thing. Even Qualcomm thinks this will be a big deal or at least hopes it will be.

Of course, the metaverse won't live up to the hype (I'm looking at you, AR, VR and 3D-TV), but I do believe that if it's even somewhat successful in the mainstream and not merely limited to a tangential element of society, it could represent the kind of service or application that fits well inside the technical aims and vision of the "10G" network.

We'll know by next fall if there are some aspiring entrepreneurs and idea people who agree. Participants in the 10G Challenge must submit a short video describing their technology or idea and fill out a form by July 1, 2022. Winners will be notified in August 2022. The grand prize and four category winners will have the chance to present their ideas at Cable-Tec Expo 2022, set for September 19-22 in Philadelphia.