The other is Gigi Sohn. If confirmed, Sohn will be the "first openly LGBTIQ+ Commissioner in the history of the FCC," according to a White House statement. 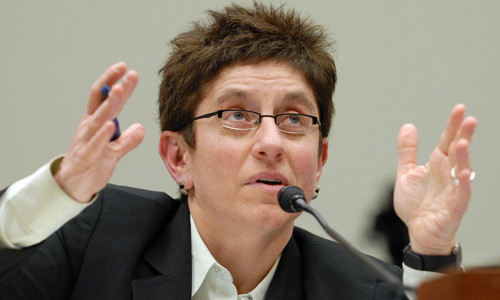 Gigi Sohn was reportedly one of Biden's early picks for the FCC Chair role, but some in the cable industry pushed back, fearing she'd pursue broadband price regulation.
(Source: UPI / Alamy Stock Photo)

A counselor to former FCC Chairman Tom Wheeler during the Obama administration from 2013-2016, in addition to leading the consumer advocacy group Public Knowledge, Sohn is known to both the federal agency and many on Capitol Hill, a fact that may have helped and hurt her so far.

According to Fierce Wireless, Sohn was floated by Biden to chair the FCC earlier this year. But as Blair Levin, former chief of staff to FCC Chairman Reed Hundt, wrote in an investor's note on July 26, "We understand that effort led to enough Senatorial opposition that she is no longer at the top of the rankings, leaving the situation murkier than ever."

That senatorial opposition may have come via whispers from their friends in the cable lobby.

Indeed, the mere consideration of Sohn for Chair was one reason for Bernstein media analyst Peter Supino to downgrade his rating on Charter Communications stock in July: "As chairwoman, we think Sohn would probably pursue a form of broadband price regulation," Supino wrote. "Were Sohn appointed, we would expect cable stocks to tumble. In such a scenario, we would expect Charter to decline more than Comcast given its much higher mix of EBITDA from internet service provision."

With the Biden administration on the cusp of passing the infrastructure bill with $65 billion in broadband funding  and the cable industry having avoided the 'terrifying' prospect of a Chair Sohn  here are a few things we know about where Sohn stands on crucial broadband issues.

Critical of the FCC's progress on... all of it

Sohn is no stranger to the FCC. Nor is she shy about criticizing its progress, or lack thereof, on broadband. In a speech on rural broadband policy to the Association of Public and Land-Grant Universities in January, Sohn remarked that the FCC's investment in broadband hasn't paid off.

"Over the past decade, the FCC alone has spent well over $50 billion to build out broadband networks in rural areas. That's probably enough money to build fiber-optic networks to every rural home and business in the country. What return has the American ratepayer gotten on her investment?" she said. "Painfully slow networks and, according to Broadband Now, 42 million Americans who still don't have broadband available to them at any price."

"It didn't take long for people to figure out that much of this money was not going to result in the promised gigabit networks or in significant deployment to unserved rural areas," she said. "This embarrassment caused 157 bipartisan and bicameral members of Congress to write a letter to the FCC asking it to more thoroughly vet the winning bidders to ensure that they have the technical, operational, financial and other wherewithal to build the promised networks, including putting their 'long form' applications out for comment, which would be unprecedented. You can't get 157 members of Congress to agree on the time of day  so that should tell you something."

Big on building back better maps

Sohn points to the well-known problem of bad mapping data at the FCC as one of the reasons for the agency's failures to bridge the digital divide. "The results of bad data were plain to see in the RDOF auction. Areas that were unserved, but appeared to be served on the FCC's maps, weren't eligible for the auction. And areas that were across the street from gigabit service provided by large cable companies appeared to be unserved," she said in her January speech. "And because of bad data, the FCC was able to boast that broadband was being deployed to all Americans on a reasonable and timely basis, and that it needn't take any regulatory action to ensure greater availability and adoption of broadband."

She also referenced what she'd like to see the agency do to fix broadband mapping: "Congress gave the FCC $65 million to rewrite the maps using more granular data  But the agency needs, and will provide a portal for, crowd-sourced data to make the maps even more accurate. And, I'm hoping that it will seek and include not only data on broadband availability, but also on speeds and prices."

Sohn points to state-led mapping efforts in Pennsylvania, conducted by Penn State, and in Georgia, conducted by the real estate technology company LightBox, as "the gold standard."

"The Georgia broadband map is the most granular in the nation. Populated by data provided by a commercial real estate company, it precisely maps the availability of broadband services to every home and business in the State," said Sohn.

On this episode of The Divide, Eric Frank, CEO of LightBox, discusses his company's nationwide Internet availability map and the detailed data sources behind it.

If confirmed, Sohn will return to an FCC that's contending with some of the same big issues from the Obama administration, including the potential restoration of net neutrality rules. In an analysis in October 2020, Sohn wrote that FCC leadership under the next administration "should quickly commence a proceeding proposing to reclassify broadband as a 'telecommunications service' under Title II of the Communications Act of 1934." This, she says, puts the FCC on firm legal ground to "restore or strengthen the 2015 network neutrality rules," fund broadband through the FCC's four universal service programs and promote broadband competition.

Sohn is a proponent of community networks of all kinds and sees them as one key to what she calls the "affordability agenda," which also includes price transparency and strengthening the Lifeline Program. Testifying to the House of Representatives Committee on Energy and Commerce's Subcommittee on Communications and Technology in January 2020, she called on Congress to "prohibit states from blocking communities that wish to build their own broadband networks, be they municipal networks, public-private partnerships or other arrangements."

"These laws, passed at the urging of the largest incumbent broadband providers, are not only flatly anticompetitive, they prohibit deployment in rural communities that the incumbents have no intention of ever serving," said Sohn. "Most destructively, these laws directly raise the price of broadband for the most vulnerable Americans."

President Biden had initially proposed "lifting barriers that prevent municipally-owned or affiliated providers and rural electric co-ops from competing" in a fact sheet about the broadband provisions in the infrastructure bill. But by the time it got through the Senate, that language was softened to allow for funds to be used on public broadband projects, but it does not pre-empt existing state laws that ban such networks.

As Sohn told the Wall Street Journal of the legislation, "It's an absolute sea change, a significant increase in the involvement of the federal and state government in the broadband market ... Is it everything I would have wanted? No. But it's a major step forward and can be supplemented with action from the FCC and other agencies."

With the Senate's blessing, Sohn will soon have the chance to prove that.

Rosenworcel's official designation as chair (a position she's held in an acting capacity) makes her the first woman to helm the federal agency.