US cable's broadband subscriber growth is flagging in the face of slow housing move activity alongside rising competition from fiber and fixed wireless access (FWA) services. But cable's still-early entry into the wireless/mobile sector continues to make progress, effectively serving as a new growth story for an industry badly in need of one.

Granted, cable operators such as Comcast and Charter Communications are tapping into mobile to prop up their high-margin broadband businesses, using mobile bundles to retain and gain broadband subscribers. But cable's current successes in the mobile market are putting pressure on mobile incumbents AT&T, Verizon (which does get some financial benefit from its MVNO relationship with US cable) and, to a lesser degree, T-Mobile.

Cable's steady rise in mobile continued into the second quarter of the year, with cable taking nearly half (49.2%) of industry net additions in the period (after adjusting for 3G network shutdowns), according to MoffettNathanson's latest report (registration required) on the mobile sector. Cable's Q2 2022 take was up from about 31.9% in the year-ago period.

That's helping to put cable's mobile business on a rising trajectory. Comcast, Charter and Altice USA combined to add 694,000 mobile lines in the second quarter, ending the period with 9.12 million. 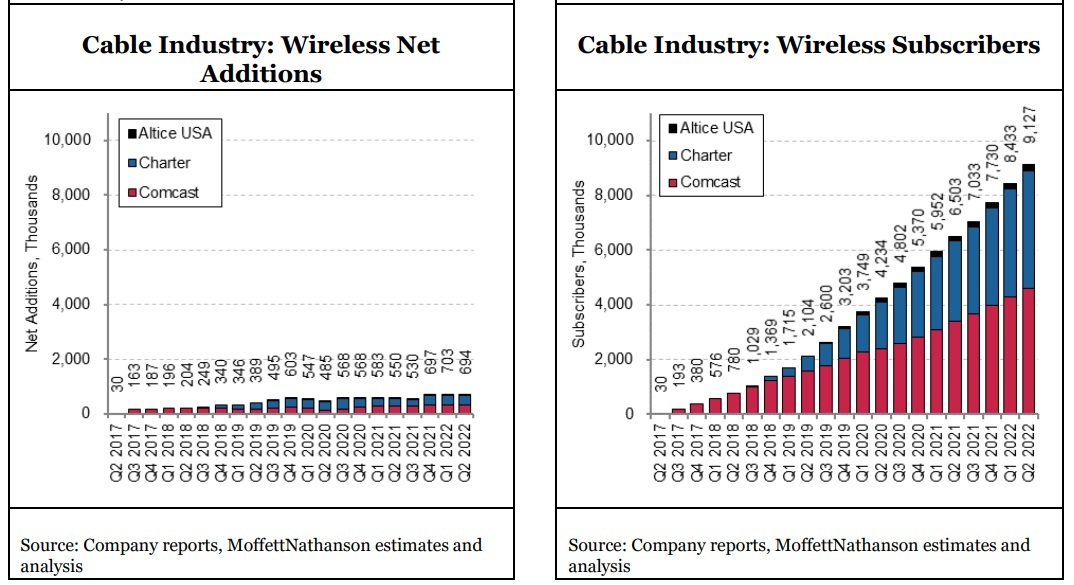 Those numbers are rising even as cable's latest move into the mobile arena – which follows a series of fits and starts and outright exits – remains in the early stages.

WideOpenWest, a competitive cable and fiber overbuilder, has entered the game through a partnership with Reach Mobile (but has yet to release any mobile subscriber numbers). Cox Communications is set to reenter the mix this fall. Meanwhile, Mediacom Communications is threatening to jump into the mobile fray.

Additionally, the newly-named National Content & Technology Cooperative is working on deals to enable hundreds of independent cable operators to get into the mobile business by the fourth quarter of this year.

That activity is setting the stage for significant involvement in mobile by a segment of the market that Wave7 Research analyst Jeff Moore has coined as "junior cable."

The path set by Comcast, Charter and Altice USA could be a boon for other cable ops.

"Cable Wireless offers have been more successful than anyone had expected when they were first introduced," MoffettNathanson analyst Craig Moffett surmised in the report. Of note, it appears that Comcast 's Xfinity Mobile service has reached nearly two lines per home per mobile sub, up from about 1.6 mobile lines per account just a year ago.

While cable's current mobile take of more than 9 million provides a nice round number, the analyst also points that that the figure represents just 3% of the US industry. That's a lot of potential runway.

And cable, not typically known for giving consumers the warm and fuzzies, appears to be making a breakthrough in interest with respect to wireless.

Citing data from Navi, a firm that aggregates data on service plans and promos from major postpaid carriers, original equipment manufacturers and large retailers, Moffett points out there's a "clear and growing interest in Cable Wireless as a potential service provider."

To wit, interest share in Comcast's Xfinity Mobile and Charter's Spectrum Mobile among "Find a Plan" users tallied 18% in July 2022, up from 14% in December 2021. Though Navi's customer base presumably over-indexes on budget-conscious consumers, "we still find their data helpful in highlighting certain market trends," Moffett explained.

No easy answers for Verizon and AT&T

And he notes that incumbent mobile players have no choice but to respond to cable's successful move into the market, noting that national carriers have introduced new low-cost plans in recent months. But it's not entirely clear how well that's working, and whether new entry level plans are doing more to keep churn in check than they are to acquire new customers.

"Lower industry growth means a more challenging path forward for all carriers particularly given the rapid share gains of the cable operators," Moffett wrote. "While Cable Wireless collectively took nearly 700K net adds during the quarter, they would presumably have taken even more had the incumbents new basic entry plans not been introduced," Moffett surmised.

More broadly, he argues that there's "no easy answers" for AT&T and Verizon as mobile finds itself in another period of rising competition. Moffett believes Verizon is in the toughest position, and thus downgraded the stock to "Underperform," and cut his price target on Verizon shares to $41, from $55.