Record mobile line gains by Comcast and Charter Communications in the third quarter of 2022 translated into a 31% share of industry phone net adds in the period, according to a fresh analysis of the US wireless industry.

That Q3 figure is up notably from 20.9% share in the year-ago quarter, but is down from 49.2% in Q2 2022, according to Moffett Nathanson's (a unit of SVB Securities) report (registration required). 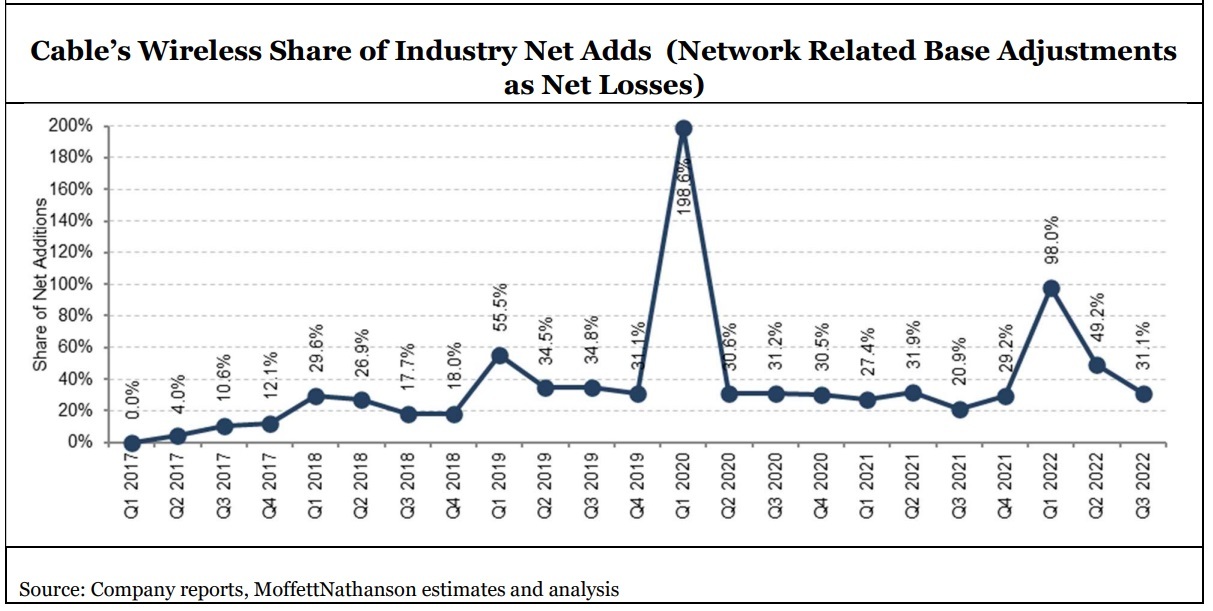 Q3's totals took US cable's grand total to 9.86 million wireless lines, up from 6.5 million in the year-ago period.

Among other cable operators, WideOpenWest launched a mobile offering in partnership with Reach Mobile earlier this year, but has yet to reveal any subscriber data. Cox Communications introduced its new mobile service to a set of markets in August and expects to have it available to all its markets by the end of 2022. The National Content & Technology Cooperative (NCTC), an organization that represents more than 700 independent cable operators, is expected to announce a mobile option for its membership in the coming weeks.

"Cable's outsized share of industry net additions creates an obvious 'crowding out' problem for incumbents," Moffett noted. "This crowding-out problem only exacerbates the depletion of the industry's gross add pool ... as a consequence of reduced churn at T-Mobile and AT&T."

MoffettNathanson also found that T-Mobile (including legacy Sprint) led with a 30.9% share of post-paid phone adds in the quarter, followed by Verizon (28.9%), AT&T (27.5%) and cable (11.5%). Dish added a relatively small 1,000 phone net subs in the period, a bounce back from eight prior quarters of losses.

Excluding cable's efforts, growth for the big three incumbents slowed to just 1.6% year-over-year, "a level still well above population growth rate but nevertheless the lowest growth rate we have seen in eighteen months," Moffett explained. "Industry growth is slowing. Cable is taking a larger and larger share of what is left."