The media world has mocked Rogers Communications for the Succession-like drama that embroiled the Canadian cable and mobile giant during a recent board battle that featured a fair share of back-biting among members of the Rogers family.

So it only seems fitting that the fictitious world of Succession and the real world of Rogers Communications collided this week on Cameo, a service that enables professional athletes, actors and other celebs to send personalized video messages... for a fee.

Brian Cox, the award-winning actor who plays Logan Roy, the foul-mouthed patriarch and CEO of media conglomerate Waystar Royco on the hit HBO series, was evidently paid to deliver a comedic and quite colorful message to Rogers Chairman Edward Rogers for his role in ousting former Rogers CEO Joe Natale.

"Edward. This is from Suzanne," Cox says in the video, in an apparent reference to Edward's wife, Suzanne Edwards. "Congratulations on your real-life Succession at Rogers Communications. And also, having Joe Natale to f*** the f*** off."

The Globe and Mail secured access to the 19-second video clip, which, as alluded to above, sprinkles in some not-entirely-safe-for-work language. 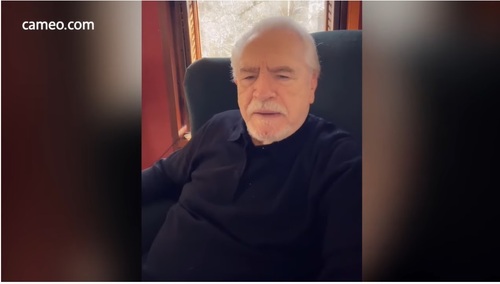 With a nod to the character he plays on Succession, Brian Cox delivers a profanity-laced message to Rogers Chairman Edward Rogers.
(Image source: Cameo screen capture)

A spokesperson for Edward Rogers told CTV News that "the video was shared with Edward as a practical joke ... He did not author nor was he aware of the review on Mr. Cox's Cameo page."

Okay. But did Edward Rogers at least laugh?

According to Cameo, anyone can book a personalized message from Brian Cox for $689.

Martha Rogers, a sister of Edward's who fought against her brother's power moves at the company, seemed to take the joke in stride, offering some snark of her own on Twitter:

Huh. I got mom a vase for Christmas. https://t.co/Ib9v720U0Z pic.twitter.com/mqcCWbB1bM

Back in the real world, Rogers Communications installed Tony Staffieri, the company's former CFO, as interim president and CEO back in November, a move that subsequently ushered Natale out the door.

That transition took place about two weeks after Edward Rogers, the once-ousted chairman of Rogers Communications, was reinstated to the role and his move to replace several company directors was cleared by the British Columbia Supreme Court.

Martha Rogers and Melinda Rogers-Hixon (Edward's two sisters) and Loretta Rogers (the trio's mother) voted against the appointment of Staffieri and issued an overall statement of disapproval regarding Natale's termination as the company's CEO.