LOUISVILLE, Colo. – A new standardized fiber node that can support DOCSIS, PON and wireless access networks has finally made the leap from diagrams and schematics to actual, in-the-flesh hardware.

Here last week at the "10G Showcase" at CableLabs, Charter Communications showed off a current-stage version of the Generic Access Platform (GAP), a new fiber node based on SCTE standards covering the node housing as well as the interfaces that enable various service and compute modules to snap in like Lego bricks. 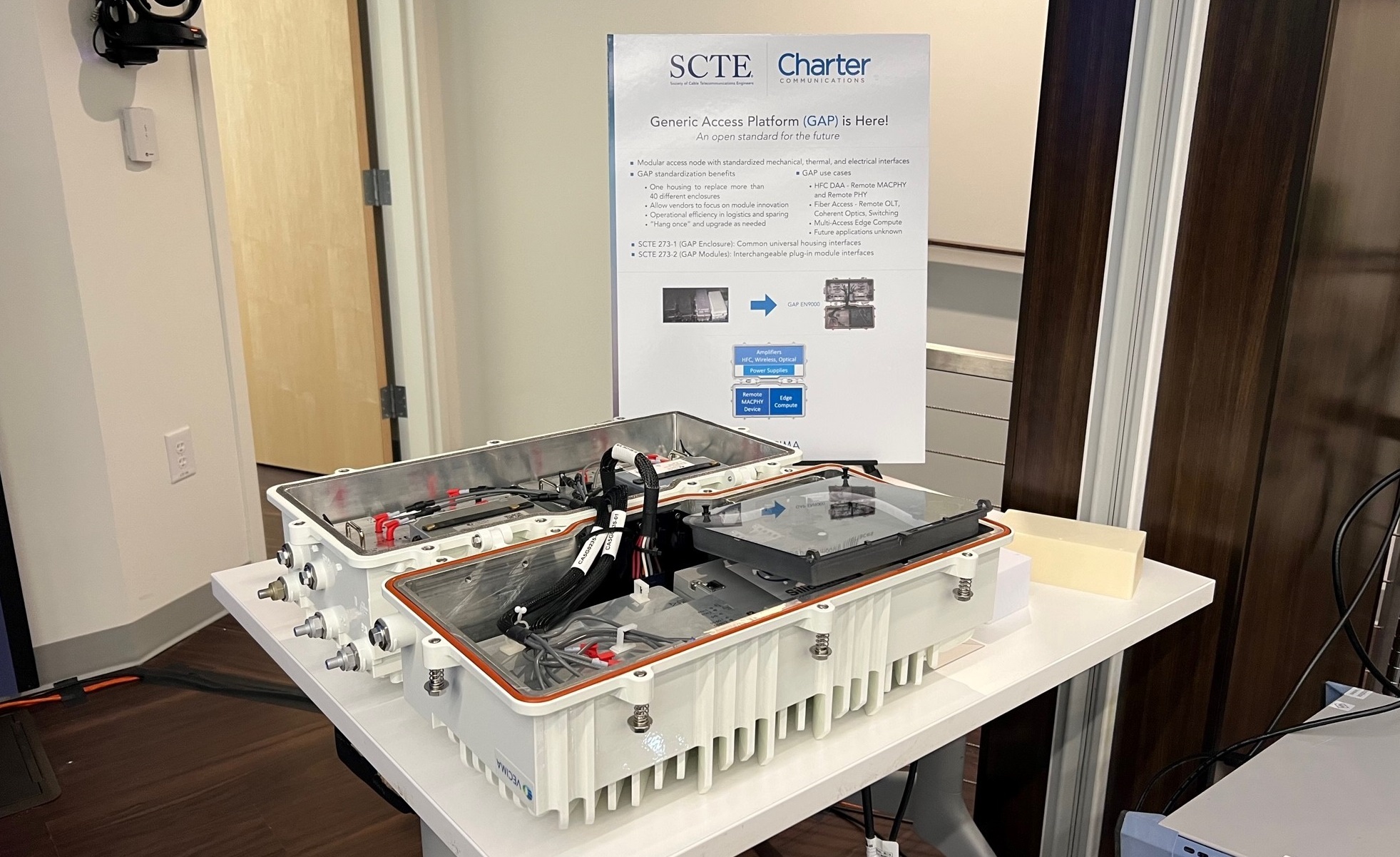 The GAP node shown here (the Entra EN9000) was made by Vecima Networks, a supplier that acquired a batch of GAP-related intellectual property from ATX Networks more than a year ago. That deal included ATX's drawings and schematics for a GAP node, along with some prototypes for a GAP node enclosure. Vecima agreed to license the IP back to ATX should ATX decide at some point to make its own GAP products.

The standards call for a GAP Base that contains the power supplies, RF amplifiers and connectivity to the box. The GAP Lid contains the digital elements and service modules, such as remote PHY and remote MACPHY devices, 5G and PON modules and, possibly, edge compute modules.

Stepping away from the proprietary past

The broader idea is to shift the industry from legacy, proprietary (and sometimes single-purpose) nodes to a standardized platform that can support a much broader array of technologies. And instead of having to cut a node out of the network and replace it with a new one, GAP nodes are expected to have legs because the guts of the housing can be altered and changed with the aforementioned interoperable service modules.

As designed, any supplier can build modules for a GAP node, John Williams, VP of engineering and architecture at Charter, said. "This is an open standard. All other nodes are proprietary," he added.

In the early going, Charter envisions using GAP nodes for its distributed access architecture (DAA) deployments. Although a GAP node can support PON and 5G access connections along with edge-based compute, the initial form of the node shown here supported DOCSIS and the remote MACPHY flavor of DAA.

"The optionality there is enormous," Stephanie Mitchko-Beale, Charter's EVP and chief technology officer, said, noting that Charter has not made decisions on what to pack in the node beyond remote MACPHY. "It's a story to come."

Charter has not spelled out its deployment plan for GAP nodes. But Williams said the expectation is that the operator will add them to the network incrementally as it reduces the number of nodes present on its hybrid fiber/coax (HFC) networks.

Williams said Charter would like to get started down that path "sooner than later." Tooling on GAP nodes is underway, with an expectation that the first wave of commercial products will hit the street by the second quarter of 2023, he said.