Hey, have we mentioned it yet? Light Reading's Cable Next-Gen Business Services Digital Symposium heads into its 15th year this Thursday.

Why, yes, we have mentioned it – here and here.

Let's keep this going. I've decided that it's my turn to serve up a glance back at what has become the longest running event in Light Reading history. It almost seems like a decade and a half has passed by.

On a cold, blustery day, Alan Breznick and I hopped on a subway to The Westin New York at Times Square early on December 7, 2007. We took the subway because it was inexpensive and, more importantly, because Alan, a wily vet of the Big Apple, knew how to get us from point A to B to C. When I'm in New York, I cab or Uber it to locations that might be two blocks away, because I usually can't find my way out of a paper sack.

So off we went, to the first ever Light Reading Cable event (yes, that's what the cable section of the site was called Back In The Day). In fact, the event itself was called The Future of Cable Business Services back then. Here's some visual proof of the moment, taken with a vintage 1.5-megapixel Sony camera: 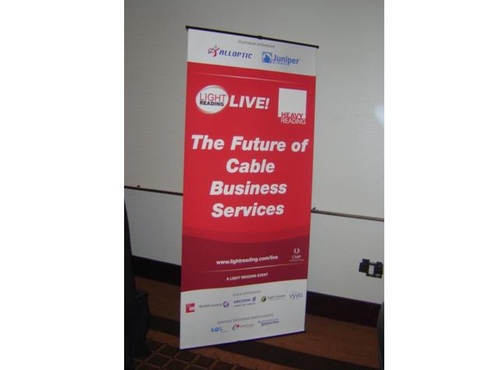 Feast your eyes on the signage for Light Reading's first-ever cable event, an image taken with a digital camera that delivered picture quality that was only rivaled by VHS.
(Image source: Jeff Baumgartner)

Back then, cable's focus was largely on small businesses served on the DOCSIS network, with Time Warner Cable talking about a new phone service that supported up to 12 lines with unlimited local and long distance calling. "2008 is the year to scale our phone business and drive the bundle," Kenneth Fitzpatrick, then the SVP of business services at Time Warner Cable, boasted at the time.

But Optimum Lightpath was also in the market, serving larger businesses with fiber and talking up the virtues of MEF. Fast-forward to today, and that unit is still going strong, now jointly owned by Altice USA and Morgan Stanley Infrastructure Partners (MSIP).

Oh, and Ugly George paid us a visit.

The event set the table for many more events  and many more hours of toiling by Alan  in the years to come.

December 2009: Cloudy, with a chance of Ethernet

It was around this time that US cable was starting to get more fixated on cloud computing and Ethernet-based services for businesses. And operators started to discuss how mobile broadband would be part of that picture, with certain operators, TWC among them, focused on their partnership at the time with WiMax provider Clearwire. Say, how did that turn out?

This was also around the time that cable operators were driving enough scale into business services to result in the bandying of some big, round numbers. "We'll definitely hit $1 billion in 2010," and double that to $2 billion within six years, Phil Meeks, then VP of Cox Business, said at the event. "The market's there for us to get it," he added, citing the pursuit of verticals such as government, healthcare, education and financial institutions.

Oh, and some of us were already a bit spent before the event got underway – Comcast announced that morning it was buying NBCUniversal.

This year, Alan, LR's Knower of All Things Cable, predicted that US cable operators were in position to pull down about $6 billion in commercial revenues in 2011, and build on the 4% to 5% of the market the industry had been able to carve out for itself. This was all entering the picture after Cox, Comcast and Time Warner Cable had all broken the $1 billion mark in annual business services revenues for the first time. And Comcast was poised to easily surpass the $2 billion market in 2012.

Cox's Phil Meeks was with us again, announcing that the cable operator was on track to bring in $1.4 billion in business services revenues that year, though the company's cell backhaul business was showing signs of slowing down.

Still a year before it would eventually strike a deal to combine with Charter Communications, TWC's annual biz services take had surpassed the $3 billion mark. Meanwhile, US cable was on the verge of crossing the $10 billion milestone in annual business services revenues , with Alan observing that MSOs were "moving up the value chain to larger companies."

Indeed, they have, and did. Comcast Business, for example, launched an initiative focused on the Fortune 1000 the following year.

I could go on and on. But you get the gist. US cable has made some incredible progress with business services over the past 15 years, and Light Reading, led by Alan, have been there every step of the way.

And we hope you'll be with us virtually this Thursday (December 9) as this year's event, which features speakers from Cox, Comcast, AWS, MEF and Altice USA, gets underway. Just go here to register.