Making it clear that Liberty Global's access network upgrade plans in Europe and its pursuit of "10G" are far from uniform, CEO Mike Fries said the company will push ahead with fiber-to-the-premises (FTTP) overlays in the UK, Ireland and Belgium, and pursue a "hybrid" approach using a blend of FTTP and DOCSIS technologies in Switzerland and the Netherlands.

Virgin Media O2, the UK company controlled by Liberty Global and Telefonica, announced its ambitious, multi-year FTTP overlay upgrade plan in late July. The plan is to deploy FTTP network upgrades, using XGS-PON, across the vast majority of its homes passed by 2028.

Virgin Media has since announced a similar plan for Ireland, expecting to deploy a FTTP overlay to about 1 million HFC homes there by 2025. 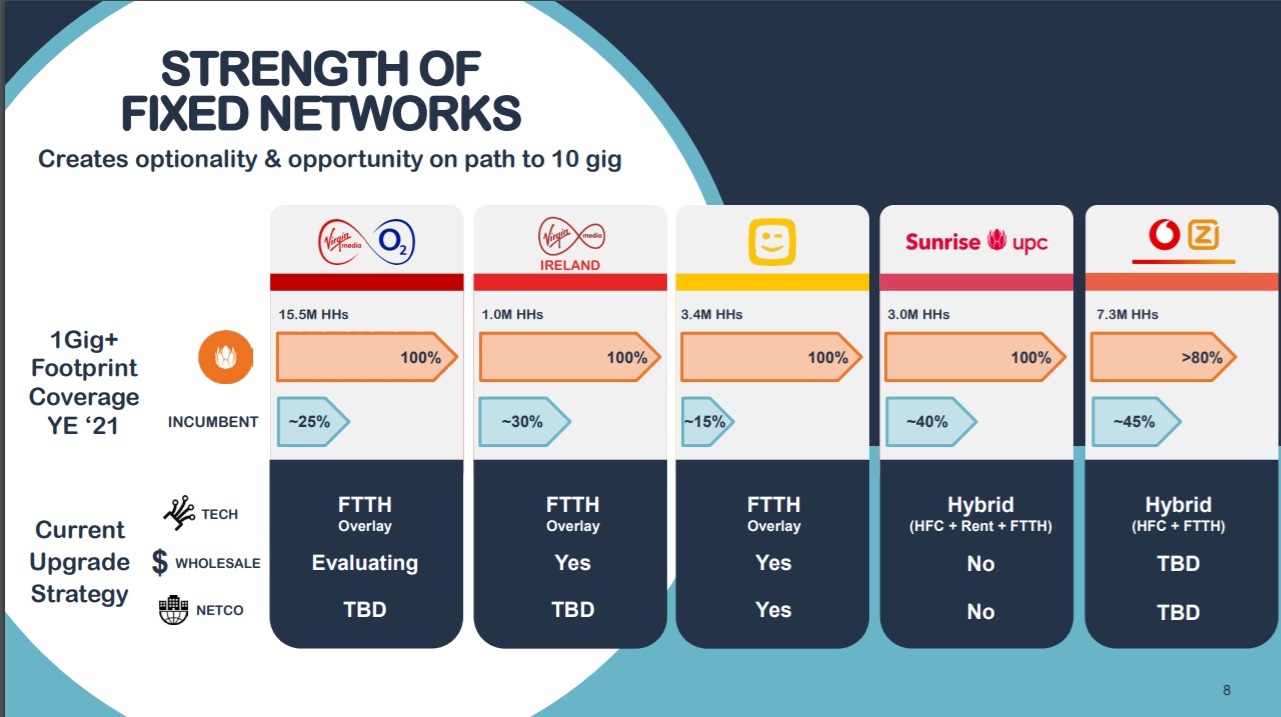 Fries said Virgin Media O2 is making progress proving out the model in the UK, where the company is in the midst of a 50,000-home trial in three locations. The plan there is to validate engineering and upgrade costs and to determine whether deployment costs there are only modestly higher relative to DOCSIS 4.0.

The company has reasoned that it can get the job done for about £100 (US$136) per premises passed, thanks in part to existing underground ducting that eliminates or at least reduces the need for expensive digging and construction.

From there, the company will only build drops and incur customer premises equipment (CPE) costs for customers who want or need an FTTP-based service. The HFC network will stay.

"I'm happy to report that, so far, everything is checking out," Fries said, noting that he expects to provide additional detail about the trial on Liberty Global's Q4 2021 earnings call.

With respect to Virgin Media's FTTP upgrade plan in Ireland, Fries said the operation there benefits from similar infrastructure advantages to the UK. In Ireland, the company has access to its own ducts on about one-third of the network, and aerial plant on the remainder, he noted.

Liberty Global intends to open up the Ireland network to wholesale customers. Fries said the company is still evaluating the wholesale angle in the UK, stressing that reselling the network did not factor into the plan.

"Our view is it's accretive either way," he said. "Of course, if there were wholesale, that would be even more accretive  It's only upside if we were to do something in wholesale on the existing footprint."

In Belgium, Telenet and partner Fluvius, a local utility company, are working together to upgrade Telenet's HFC network with an FTTP overlay, and establish a separate and jointly-owned "NetCo" that sells wholesale services, Fries explained.

The agreement with Fluvius and the fiber overlay plan "secures [Telenet's] position as the leading broadband provider in Flanders, with an opportunity to expand wholesale revenue and garner an even higher multiple for its stake in the NetCo from industrial or financial partners," Fries said.

In Switzerland, Sunrise UPC will pursue a hybrid strategy involving a a mix of DOCSIS 4.0 on HFC along with some FTTP buildouts. Fries said it's "unlikely" that the unit will pursue wholesale revenue or a NetCo structure there.

In the Netherlands, VodafoneZiggo will also utilize a hybrid model, with an emphasis on DOCSIS upgrades "geared towards capacity rather than pure speed," Fries said, noting that VodafoneZiggo has seen an acceleration in fiber overbuild activity.

Execs also expanded on the opportunities for Liberty Networks Germany, a new 50/50 joint venture of Liberty Global Ventures and InfraVia Capital Partners that will assess opportunities for FTTP networks in greenfield areas in Germany. That JV enters the picture a couple of years after Liberty Global sold its operations in Germany, Romania and the Czech Republic to Vodafone.

The JV in Germany is a "new opportunity" for Liberty Global, said Charles Bracken, Liberty Global's EVP and CFO. "We definitely feel that we have a lot of scale, a lot of efficiencies from our core network builds across Europe, which make us a more attractive and a lower-cost builder of fiber in Germany than perhaps a standalone start."

Germany "has little to no fiber, and our objective is to look for areas where there's essentially no competition," Fries added. "So, it's a very targeted  small initiative to begin with, and we'll see how it unfolds."