DOCSIS 4.0 puzzle starting to come together

Hitting on what's become a key theme at this year's annual event  technical progress on DOCSIS 4.0  Finkelstein said operators have seen better than expected results for D4.0-capable passives in labs ahead of anticipated field trials. 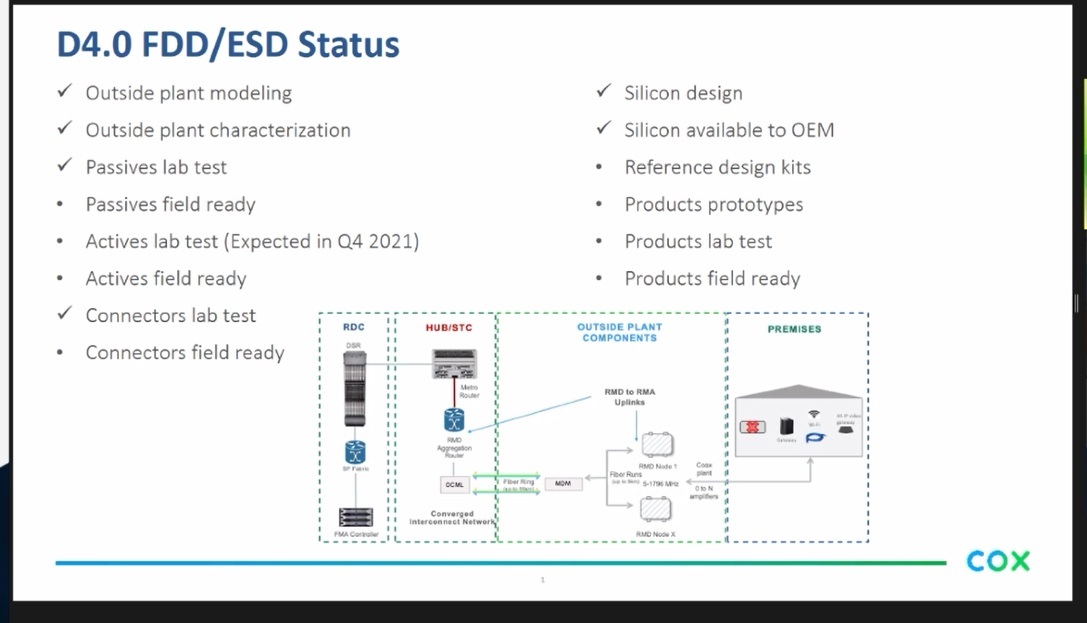 Operators are starting to think about issuing requests for information (RFPs) and requests for proposals (RFPs) for such products, but the latest round of activity with suppliers has proved out that the technology works, Finkelstein said Monday. His remarks came during a wave of sessions focused on the cable industry's broader "10G" initiative, which will rely on multiple types of access networks to deliver symmetrical multi-gigabit speeds, low latencies and enhanced security.

He added that suppliers are also making progress with active components for DOCSIS 4.0 networks that will implement the ESD flavor of the specs and enable operators to raise the spectrum ceiling of the hybrid fiber/coax (HFC) network to 1.8GHz. Suppliers, he said, are showing off 1.8GHz actives in their virtual booths at Cable-Tec Expo. Among examples, Teleste this week introduced a 1.8GHz line extender and system amplifier for the North American cable market.

Another key piece of the puzzle  silicon designs for the ESD portion of DOCSIS 4.0  is complete. That's now in the hands of a number of original equipment manufacturers (OEMs), and they are starting to prepare products, Finkelstein said. He believes Cox and other cable operators could possibly have access to remote MACPHY devices for a distributed access architecture (DAA), a requirement for DOCSIS 4.0, later this year for lab testing.

On the other end of the network, customer premises equipment (CPE) that supports the ESD option for DOCSIS 4.0 is in development, with expectations that reference designs will be ready for lab work to begin by early-to-mid-2022.

After that, the industry can prepare for field trials and eventual deployments. The timing for those pieces is "still TBD," Finkelstein stressed. "But suffice it to say that things are moving along nicely. Any new technology is always full of challenges, but so far we have not seen anything that would cause any kind of agita."

As work tied to the ESD flavor of DOCSIS 4.0 progresses, Comcast is likewise making progress with the other option  Full Duplex DOCSIS (FDX). Rather than upgrading spectrum to 1.8GHz and continuing to keep upstream and downstream traffic running separately on dedicated spectrum, FDX envisions a plant built out to 1.2GHz and the use of an FDX band that allows upstream and downstream to dynamically occupy the same block of spectrum.

Speaking earlier in the 10G session, Comcast's Rob Howald said that the operator was "making a lot of good progress" with FDX and DOCSIS 4.0, noting that much of the focus for 2021 and into 2022 will be on integration. Although much of that work is occurring in the lab, plans are underway to shift some of that work into the field, he said.

Prodan also touted other benefits of FDX, noting that it still enables cable systems not yet built out to 1.2GHz to take advantage of the FDX band and beef up upstream capacity.

He also served up a bit more detail about Comcast's plans to use an FDX Amplifier in its future DOCSIS 4.0 networks, citing some work underway with Harmonic.

As designed, the FDX Amplifier will build in the echo cancellation technology required for Full Duplex DOCSIS rather than having it built into the node. That should enable Comcast to deploy FDX on HFC networks that still have amplifiers deployed between the home and the node. Without an FDX Amplifier, Comcast's use of FDX would likely be limited to a subset of the network with "node+0" architectures, which push fiber deeper into the network and eliminate amps between the home and the node. The FDX Amplifier will put Comcast in position to deploy FDX to a much greater portion of its HFC footprint.

"We are planning on using FDX Amplifiers in our networks," Prodan said.