LAS VEGAS – NAB SHOW – Samsung, LG Electronics and Sony have put their collective weight behind ATSC 3.0 by equipping their TVs with receivers that can capture and utilize the emerging IP-based broadcast TV standard.

But a small company based in Copenhagen believes it has figured out a way to rapidly expand and scale and reach of ATSC 3.0, a standard that the broadcast industry has branded as "NextGen TV."

That company, Mediathand, has developed the Leaf, a hardware dongle powered by media gateway software.

It can be attached to a traditional router to capture IP-based ATSC 3.0 signals and convert them into streams that are compatible with smart TVs, streaming media players, tablets, smartphones and other devices that are not equipped with integrated ATSC 3.0 receivers. 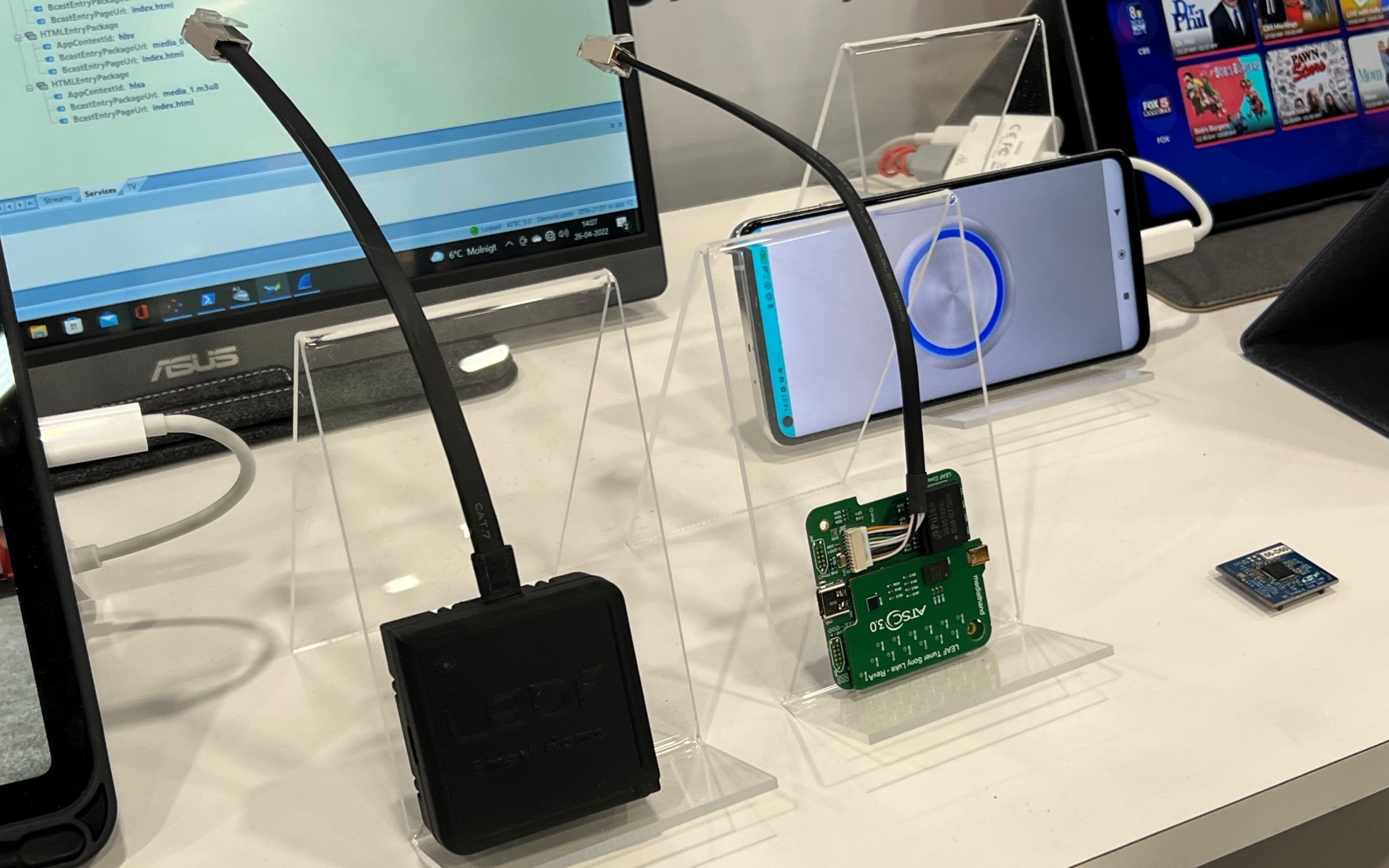 Mediathand's Leaf platform is designed to be lightweight from a processing and software standpoint. It uses a relatively simple API to discover devices on the home network, but doesn't decode video, leaving that job to the end device that renders and displays the video.

"We simply transform the signal into a format that is streamable. It won't be decoded until it reaches the final device," explained COO Allan Hammershøj.

Here at the show, Mediathand demonstrated latency of live video (from the Leaf dongle to a tablet) of just a smidge more than half a second.

And by employing a user agent that knows which devices are connecting to the Leaf, critical usage data can be fed back to the service provider or content provider – usable for features such as targeted advertising.

"That's just the side effect of the approach of the box," said Ralf Jacob, a video industry veteran who is consulting at Mediathand. Jacob founded upLynk, a video tech company sold to Verizon in 2013; Jacob later served as president of Verizon Digital Media Services for a time.

And the Leaf dongle is just the first phase of the plan. Mediathand's broader vision is to have its modular technology, which it bills as a "platform-as-a-service," integrated directly into broadband modems and gateways if it can convince some of those consumer electronics companies to play ball.

At the moment, the dongle is effectively serving as a means to an end to show the industry that the platform can interpret and convert heterogeneous signals into a compatible unicast format that can be shuttled along on the home network.

A step toward convincing industry players is taking place at NAB this week, where Mediathand is running demos at the show's ATSC 3.0 pavilion.

There, Mediathand is showing off the capabilities of its dongle, which can also support other protocols, including 5G, WiMax and DVBT2 (a digital terrestrial standard largely focused on Europe), by swapping in the right hardware module.

Down the road, the hope is to support multiple protocols in software, according to Hammershøj.

And that vision also goes beyond simply expanding access to those protocols. Mediathand also believes, at a much broader level, that its platform could also play a role in sidestepping potential content delivery network (CDN) bottlenecks that will emerge as more and more live, linear content becomes available in 4K and, eventually, in 8K.

CDNs aren't inherently equipped to handle a massive load of unicast streams, so a national ATSC 3.0 network that can deliver live TV as multicast streams can relieve the CDN congestion that's lurking out on the horizon, Jacob said.

Live demos in Copenhagen, US on deck

Beyond this week's on-floor demos at NAB, Mediathand has already been conducting real world trials of its broadband/ATSC 3.0 and broadband/WiMax combo prototypes in Copenhagen using a "professional broadcast set-up," according to CEO Gert Skov Peterson.

On deck is a module that can support a broadband/5G combo, he said.

Skov Peterson said his company is already setting up a demo in the US with an unnamed ASTC 3.0 station group partner, and hopes this week's meetings will materialize into more tests and trials in the US market.

Mediathand is a small team that's been at this for about seven years. Bootstrap funding has enabled the core R&D and the first prototypes, but the company is now exploring a bona fide round of funding as it pursues commercialization.