Consolidated Communications has launched Fidium Fiber, a new brand and service offering, in parts of northern New England as the company pushes ahead with a broader fiber-to-the-premises (FTTP) upgrade project.

Fidium is Latin for "attune." Consolidated hinted in late October that a new fiber-focused brand was in the works.

The launch of the Fidium Fiber brand and associated services is initially focused on Consolidated markets in the Northeast US.
(Source: Consolidated Communications)

"I've always felt that buying the Internet should be as easy as using the Internet," Erik Garr, Consolidated's president of consumer and small business services, said of the new brand. "We view this as bringing people and the network together in harmony. We want to have a very straightforward approach – what you want is what you should get."

The Fidium Fiber brand/offering is currently available in a handful of cities in Maine, almost 80 cities and towns in New Hampshire, and more than a dozen in Vermont.

Consolidated plans to roll out Fidium Fiber into more areas of northern New England on a weekly basis, and eventually to the company's other fiber markets in states such as California, Texas and Minnesota.

"This is the beginning of a journey," Garr said.

Fiber upgrade plan is in flight

The launch of the Fidium brand comes as Consolidated progresses with a broader FTTP/XGS-PON upgrade initiative that will expand the reach of 1-Gig speeds. The current plan is to upgrade about 70% of Consolidated's total passings, or 1.6 million passings, by the end of 2025 in parts of California, Minnesota, Texas, Illinois, Pennsylvania, Vermont, New Hampshire and Maine. 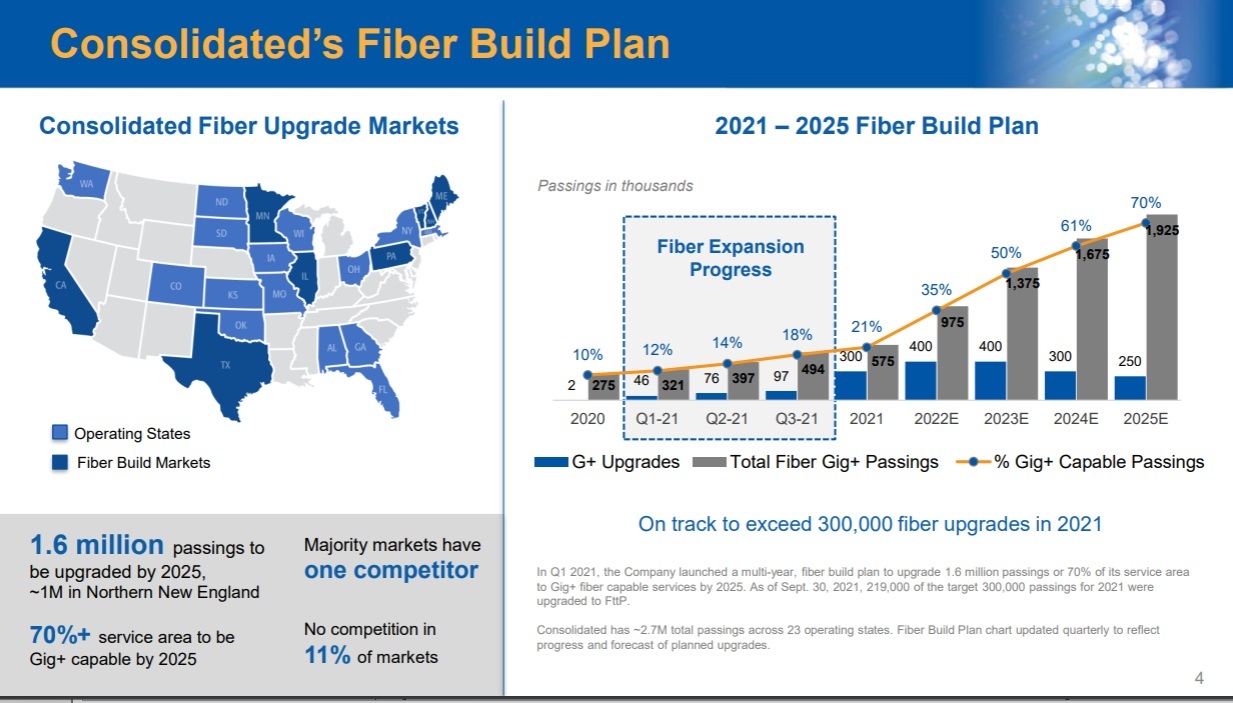 Consolidated completed upgrades to about 97,000 passings in the third quarter of 2021, and to about 219,000 passings through the first nine months of 2021. "We are on track to exceed the aggressive plan we set of 300,000 fiber upgrades for this year," Bob Udell, Consolidated's president and CEO, said last month on the company's Q3 call. Consolidated, he added, plans to upgrade another 400,000 passings in 2022.