CommScope open to other alternatives for Home Networks unit

CommScope plans to spin off its Home Networks unit into an independent publicly traded company by Q1 2022, but that plan is not necessary set in stone.

"The board is certainly open to any alternatives that might emerge along that journey to the extent that it creates more value than the contemplated path," Alex Pease, CommScope's EVP and CFO, said today on a call with reporters and analysts. 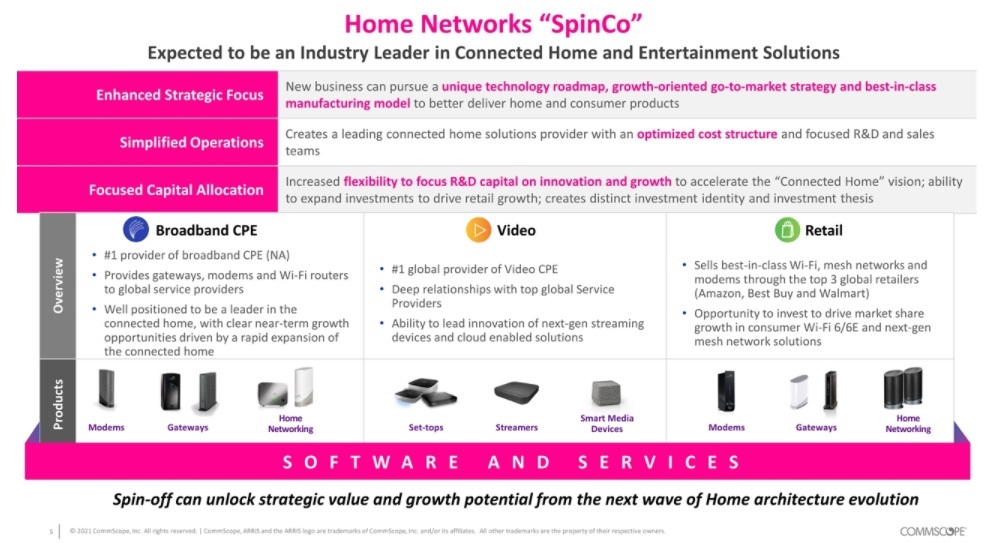 The piece of the business to be spun-off by CommScope includes broadband and video CPE for service providers, along with a retail business that hawks modems, gateways and home networking gear.
Click here for a larger version of this image.
(Image source: CommScope)

Altering that game plan would not be out of the ordinary. After all, TiVo originally planned to split out its products business and its licensing/intellectual property business before later striking a deal to merge with Xperi.

As for the current path, Pease said the spin-off was selected because of the "absolute certainty that we have that we can get this done, and the outcome being within the company's control." Left unsaid was the fact that CommScope had previously tried to find a buyer for Home Networks, a unit that makes and sells video set-tops and broadband modems and gateways, along with the management software that runs on them, but failed to find a suitor willing to play ball.

CommScope also announced that Joe Chow will become CEO of the unit upon the completion of the spin-off, a move expected to be finalized in Q1 2022.

Chow took the reins of the CommScope's CPE-focused Home Networks unit in August of 2019, about four months after CommScope's wrapped its acquisition of Arris. Prior to joining CommScope, Chow was an exec at Wi-Fi chipmaker Quantenna Communications. Chow is also late of Scientific-Atlanta and, following Cisco's acquisition of S-A in 2005, he later led Cisco's Connected Device Business Unit. Chow also had a stint at Technicolor in the wake of Technicolor's acquisiton of Cisco's CPE business in 2015. 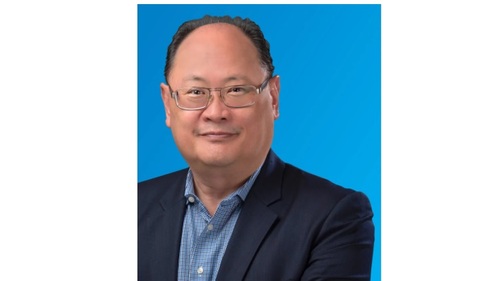 Joe Chow, an exec late of Scientific-Atlanta and Cisco who joined CommScope in August 2019, will be CEO of the spun-out company.
(Source: CommScope)

Following the spin-off, Chow will head up a business faced with shrinking revenues and margins due to a declining video CPE business that's being partly offset by a growing broadband CPE business.

Chow believes a spin-out, along with the right investment and focus in an evolving marketplace, will put the unit back on a path to growth.

"I'm extraordinarily bullish about what the potential is," Chow said on today's call. "There's more change happening inside the home today than at any point that I can remember. That change all leads to opportunity."

The broadband side of the Home Networks CPE business will likely continue to capitalize on DOCSIS 3.1 and, later, new DOCSIS 4.0 modems and gateways. According to Dell'Oro Group, CommScope's global share of DOCSIS CPE revenue at the end of 2020 was just below 35%, compared to 36% in 2019.

But Chow also sees opportunities in video as the market pivots to streaming devices and service providers look to combine and integrate linear TV with OTT apps and services.

"I believe we're at the start of a new aggregation cycle inside the home," Chow said. "The complexity of the ecosystem is going up. It's going to create consumer friction. If we can go address that friction, we will keep service providers more relevant and we will actually grow the business."

And rather than putting a massive amount of focus solely on hardware, he intends to pair that "key anchor" with software and services that can be layered on top and establish a fuller ecosystem.

"We have more backlog than we've ever had in the business," Chow added. "I think we have a very strong financial start and a strong future."

Home Networks no longer a fit

CommScope believes the spin-off will allow Home Networks to get the attention and capital it needs to pursue its plans.

"I felt like we're not able to get Joe that right investment in his business to support what he's trying to do," Chuck Treadway, CommScope's new CEO, explained.

But he was also clear that Home Networks did not fit into the parts of CommScope that will carry on (broadband networks, venue and campus networks, and outdoor wireless networks) in terms of both strategic focus and product margins.

"As we looked at the differences between Home and the rest of our segments, there were pretty stark differences," Treadway said, noting that it was difficult to invest in a CPE business with margins in the 10% range when other aspects of CommScope's business enjoyed much higher margins. Additionally, the Home Networks unit relies heavily on contract manufacturing; CommScope manufactures most of its own products across the rest of its business.

"When you put all of that together, you really see that these things really don't go together, so it was a pretty obvious choice for us," added Treadway, who succeeded Eddie Edwards as CEO last fall. "We think [Chow] is going to be able to attract some investors that get excited about his strategy. We think he'll be better off independently than with us, and I think the customers see the same thing."

Pease said CommScope's remaining infrastructure-focused business and the spun-off unit will remain strategic partners, pointing to PON and low-latency DOCSIS as two such areas of focus. "It's not as though we lose the benefit of a very close working relationship," he said.

CommScope has yet to announce the planned capital structure for the spin-off, but expects it to include a level of funded debt financing. The transaction is also expected to generate a "modest distribution of cash" to CommScope that will be used in part to pay down debt and to cover transaction fees and expenses, Pease said.

Meanwhile, CommScope has more work to do as it pushes ahead with a "CommScope Next" initiative that culminates in a review of the company's full business, with a focus on growth, cost optimization and portfolio optimization.

That process is in the "early innings," Treadway said, noting that the pursuit of strategic acquisitions could play a role.

Treadway also alluded that the initiative's cost-cutting actions have already resulted in a workforce reduction. He didn't elaborate, but a CommScope official said the cost-saving measures announced today represent a "very small percentage of CommScope's global workforce" and covered virtually all of the company's segments, functions and regions.

"Any decisions that impact our people are challenging, and we are taking these actions only because we believe they are necessary to take CommScope forward, ensure our competitiveness, and return to growth. Consistent with our values, we will treat every employee with the utmost dignity and respect," CommScope said in a statement.