PHILADELPHIA – SCTE CABLE-TEC EXPO 2022 – Comcast has accelerated its deployment of a distributed access architecture (DAA) as the operator moves ahead with speed upgrades in multiple markets today and prepares to launch multi-gig symmetrical speeds to tens of millions of homes by 2025.

"We're now moving to the second phase of our DAA journey," Robert Howald, a fellow and VP of network architecture at Comcast Cable, said here Tuesday during a keynote at a Light Reading-hosted breakfast session. "We need to get [DAA] out across the footprint as fast as we can." 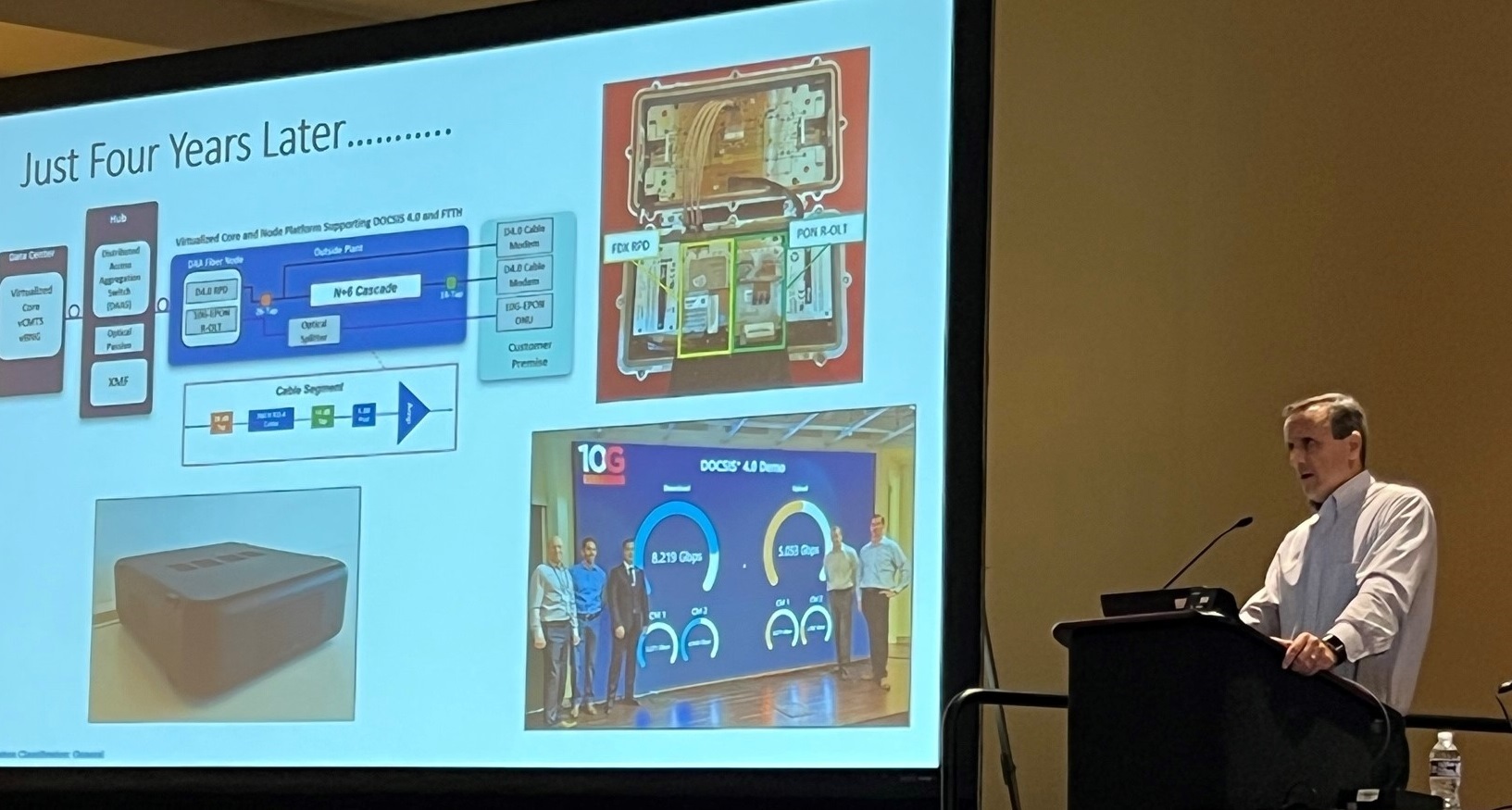 Comcast's Rob Howald said elements that make up the ecosystem for DAA, DOCSIS 4.0 and 10G are coming together as the operator sets the stage for the wide availability of symmetrical, multi-gigabit speeds.
(Source: Jeff Baumgartner/Light Reading)

In support of DAA, Comcast has already deployed more than 50,000 digital nodes into the field, along with "many hundreds" of virtual cable modem termination system (vCMTS) "pods."

That acceleration ties into a network evolution plan underway at Comcast. As announced earlier this month, Comcast will start to offer 2Gbit/s downstream speeds along with faster upstream speeds (thanks to a push to 1GHz on the network paired with "mid-split" upgrades that beef up the amount of capacity dedicated to the upstream) to 34 cities and towns before the end of 2022. Comcast will then take a bigger step with DOCSIS 4.0 and its "10G" platform that will boot up symmetrical multi-gigabit speeds starting in 2023, expanding to more than 50 million homes and businesses before the end of 2025.

"What it amounts to is accelerating this DAA and vCMTS architecture massively across the footprint," Howald said. "It's the foundation for us to build 10G on top of that platform."

A final piece of that puzzle – a Full Duplex DOCSIS (FDX) amplifier – appears to be nearing commercial readiness as Comcast deemed a recent test of a pre-production version of the product a success. The amp will ensure that Comcast can deploy the FDX option for DOCSIS 4.0 across the vast majority of its network rather than limiting it to parts of the network where fiber has been deployed deep enough to obviate the need for amplifiers.

FDX amp fills out the ecosystem

"Folks who wanted to look at FDX had some reservations about where they could do it. We're here to tell you this week that's no longer a limitation for FDX," Howald said. "We think it should make everyone rethink about how they consider migrating the network going forward. FDX components are now available for each part of the ecosystem. We think that's really important."

Time will tell how that message plays with other cable operators exploring a future move to DOCSIS 4.0.

With FDX, Comcast is sizing up a hybrid fiber/coax (HFC) network built to 1.2GHz and outfitted with an FDX band that allows upstream and downstream traffic to occupy the same slice of spectrum. Most other operators are exploring another option called Frequency Division Duplexing (FDD), which envisions HFC built to 1.8GHz while keeping the upstream and downstream traffic in separate, dedicated spectrum.

The emergence of a testable, pre-production FDX amp follows Comcast's earlier work with other pieces of the D4.0 puzzle, including trials of a remote PHY device powered by an FDX chip, loading DOCSIS 4.0-capable software to its vCMTS and testing D4.0-based modems outfitted with an FDX systems-on-chip. Comcast demonstrated much of that handiwork in April at a "10G Showcase" held at CableLabs.

Reliability being teamed with speed

But in a message that execs and engineers are making this week at the show, speed is just one piece of the puzzle as competition gets more heated with telcos and others that are getting aggressive with new or upgraded fiber-to-the-premises (FTTP) networks. DAA, as a foundation for 10G and DOCSIS 4.0, also paves the way for lower latencies and an overall more reliable network thanks in part to access to real-time telemetry that improves visibility of plant conditions, Howald said.

"Reliability ... is just as important as the speed aspect is," he said. "10G networks are not just about using technology to make the network faster, but using it to make them smarter and more intelligent and more resilient."

DAA with PON on the way

DAA/10G isn't just about DOCSIS 4.0. DAA, when put on a common, virtualized platform, also provides an option to weave in FTTP since the last mile of the network becomes an Ethernet-switched architecture.

Comcast, he added, expects to start building PON into its DAA/10G architecture sometime in 2023.