LOUISVILLE, Colo. – Several pieces of the DOCSIS 4.0 ecosystem are still in development or are available today only in prototype form. But technology demos from Charter Communications and Comcast this week showed that significant progress is being made toward the commercialization of DOCSIS 4.0.

Here at the first CableLabs-hosted "10G Showcase," both operators showed off technologies and systems for both operational modes for DOCSIS 4.0: Extended Spectrum DOCSIS (ESD) and Full Duplex DOCSIS (FDX).

Charter's demo centered on the ESD option (also known as Frequency Division Duplexing, or FDD), whereby the spectrum of the plant is extended (up to 1.8GHz) while keeping upstream and downstream traffic separate. Comcast's demos focused on FDX, a version that keeps the spectrum ceiling at 1.2GHz, but uses an FDX band that allows upstream and downstream traffic to dynamically flow in the same block of spectrum.

Charter's demo showed off a four-amplifier EDS cascade outfitted with a node-based DOCSIS 4.0-based remote MACPHY device (RMD) and D4.0 prototype modems. The demo plant ran on 1.8GHz of spectrum using a reference modem set up with a 684MHz split for the upstream. Charter pulled it off with the help of several suppliers, including Vecima (for the node), Teleste (amplifiers) and ATX Networks (taps). 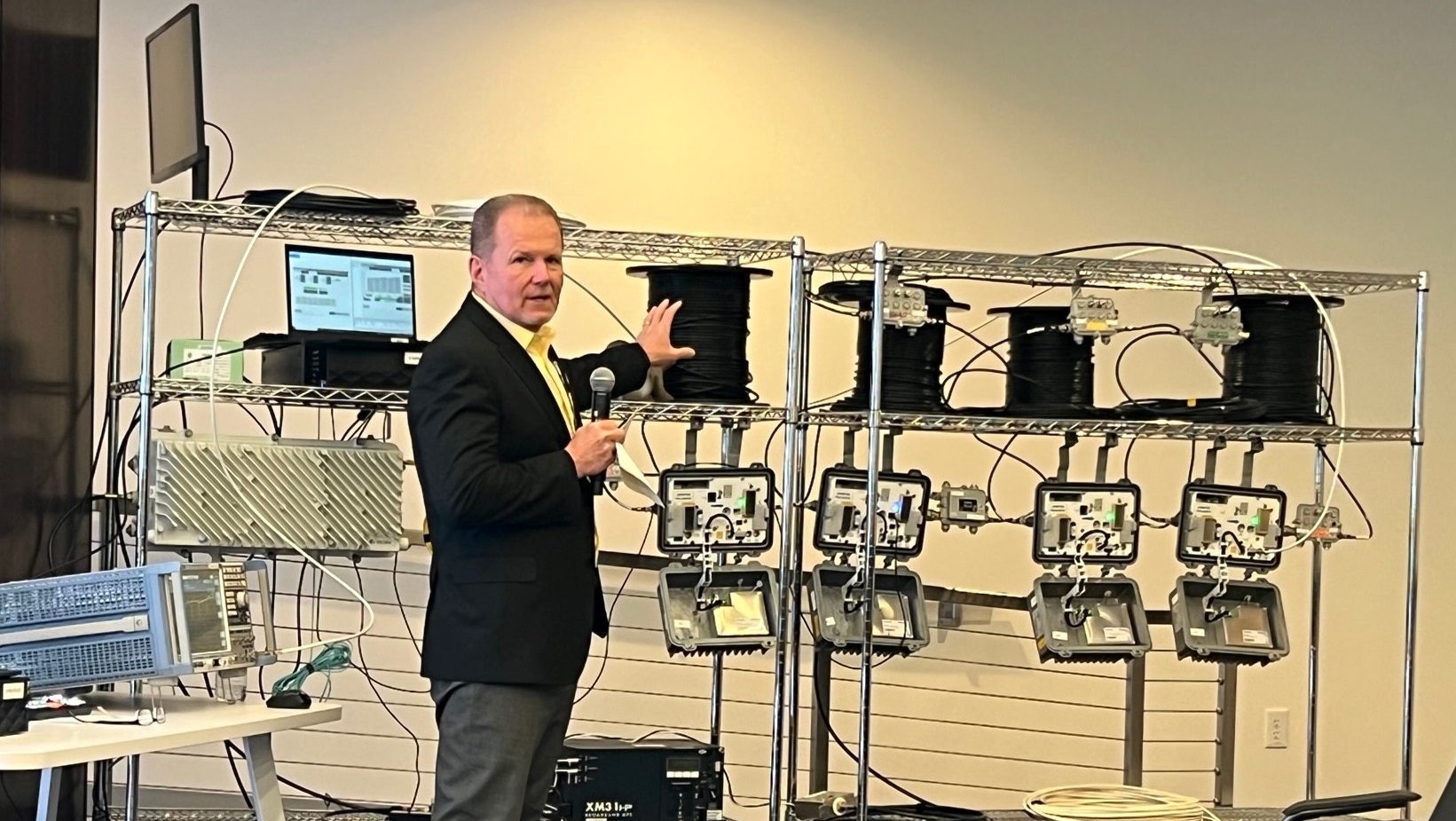 John Williams, VP of engineering at Charter, noted that the RMD used in the demo was powered by prototype silicon. Additionally, he explained that Charter would have flexibility in how it splits the upstream and downstream spectrum.

The amps in the demo were used to emulate how new modules can be dropped into existing spaces on the network. "The days of respacing are gone," Williams said. 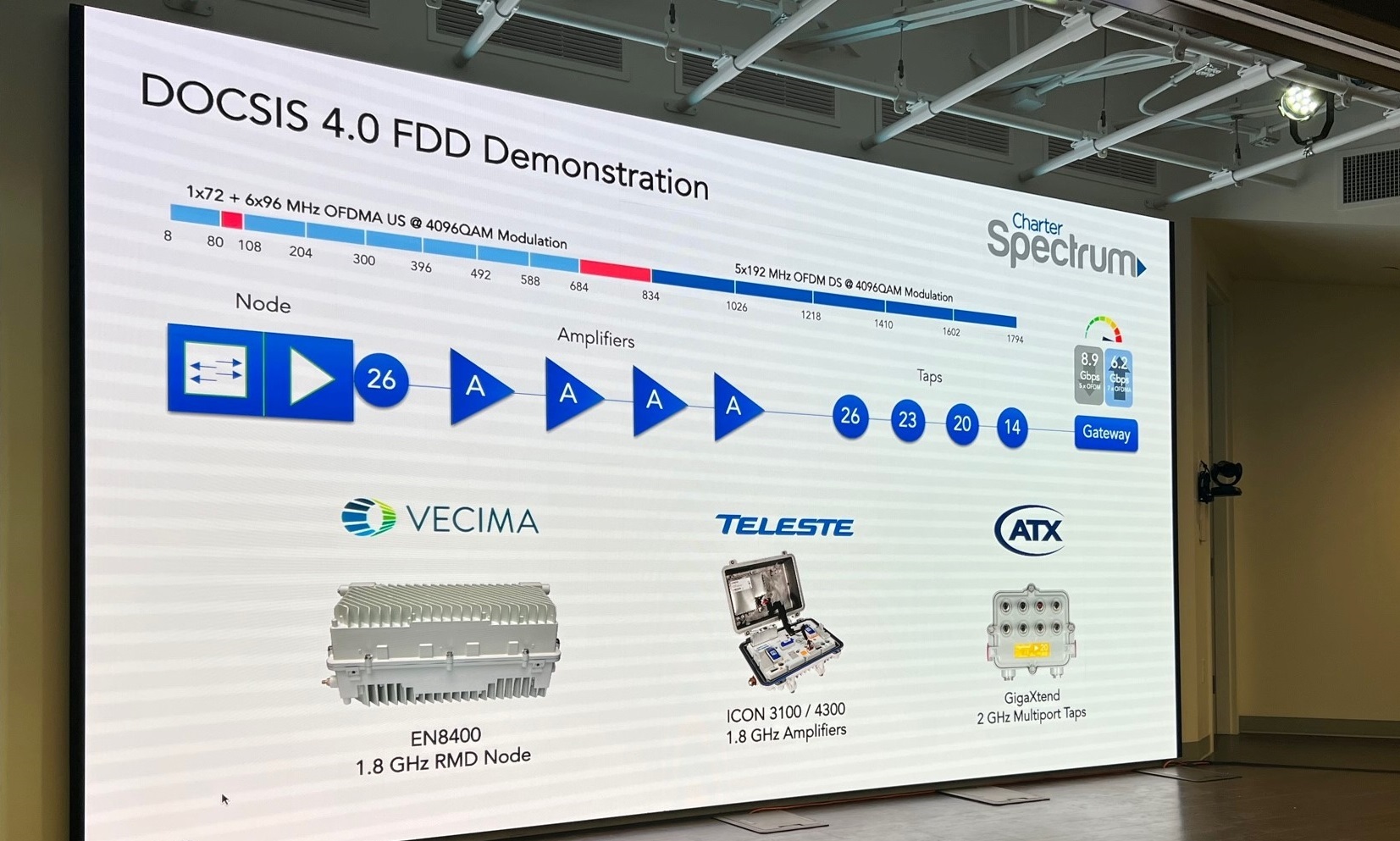 Charter's demo, linked to a Speedtest server, delivered 8.9 Gbit/s down and about 6.2 Gbit/s in the upstream.

"This is real," Williams said, noting that the demo illustrated a data max-out to the prototype modems. By changing the spectrum split, he noted, Charter could hit 10-Gig speeds.

The use of the four amps between the premises and the node  referenced to as "N+4" in cable engineering parlance  is to show "the art of the possible," Williams said. N+4 is pretty typical of what's on the network today, but deployments are "not limited to N+4," he added.

Charter also showed off a Generic Access Platform (GAP) node that is based on the new SCTE standards. Light Reading will have more about that in an upcoming story.

Comcast teed up a set of demos designed to show off the capabilities of FDX along with a new real-time monitoring system designed to beef up the reliability of 10G networks that utilize various access network technologies  HFC, fiber-to-the-premises and, potentially, wireless. 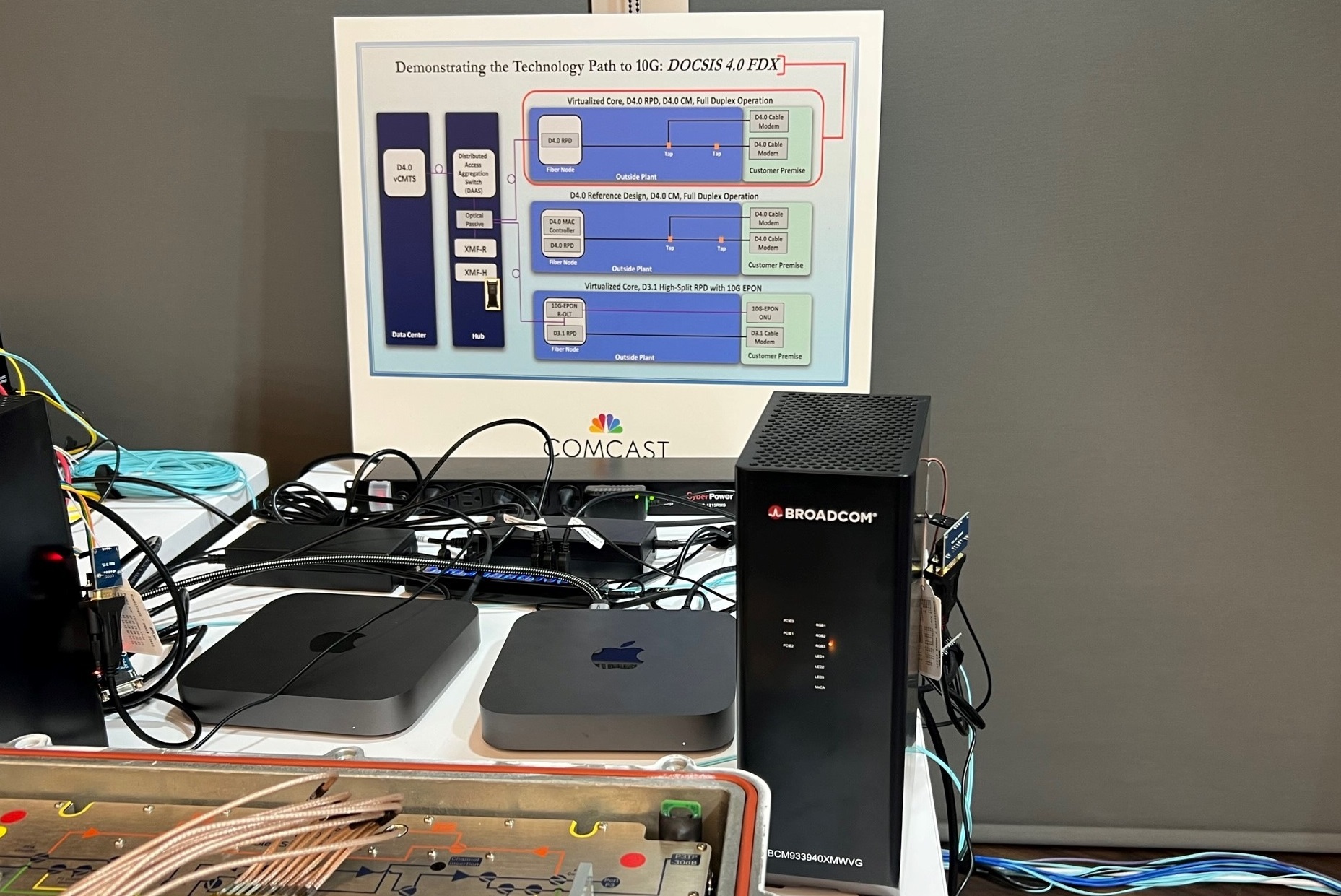 Using a distributed access architecture (DAA), Comcast's demos operated on a D4.0-based virtual cable modem termination system (vCMTS) core located 35 miles away and utilized prototype D4.0 modems with Broadcom silicon. One FDX demo focused on top speeds, and the others showed off the versatility the platform has in terms of allocating both upstream and downstream capacity.

The max-speed demo consistently measured speeds of 8.5 Gbit/s downstream and 5 Gbit/s upstream. The other demo showed how upstream and downstream bandwidth can be stacked inside the FDX band, providing the operator with the ability to carve out capacity dynamically and deliver it to different modems as they demand it, Rob Howald, VP of network architecture, said. 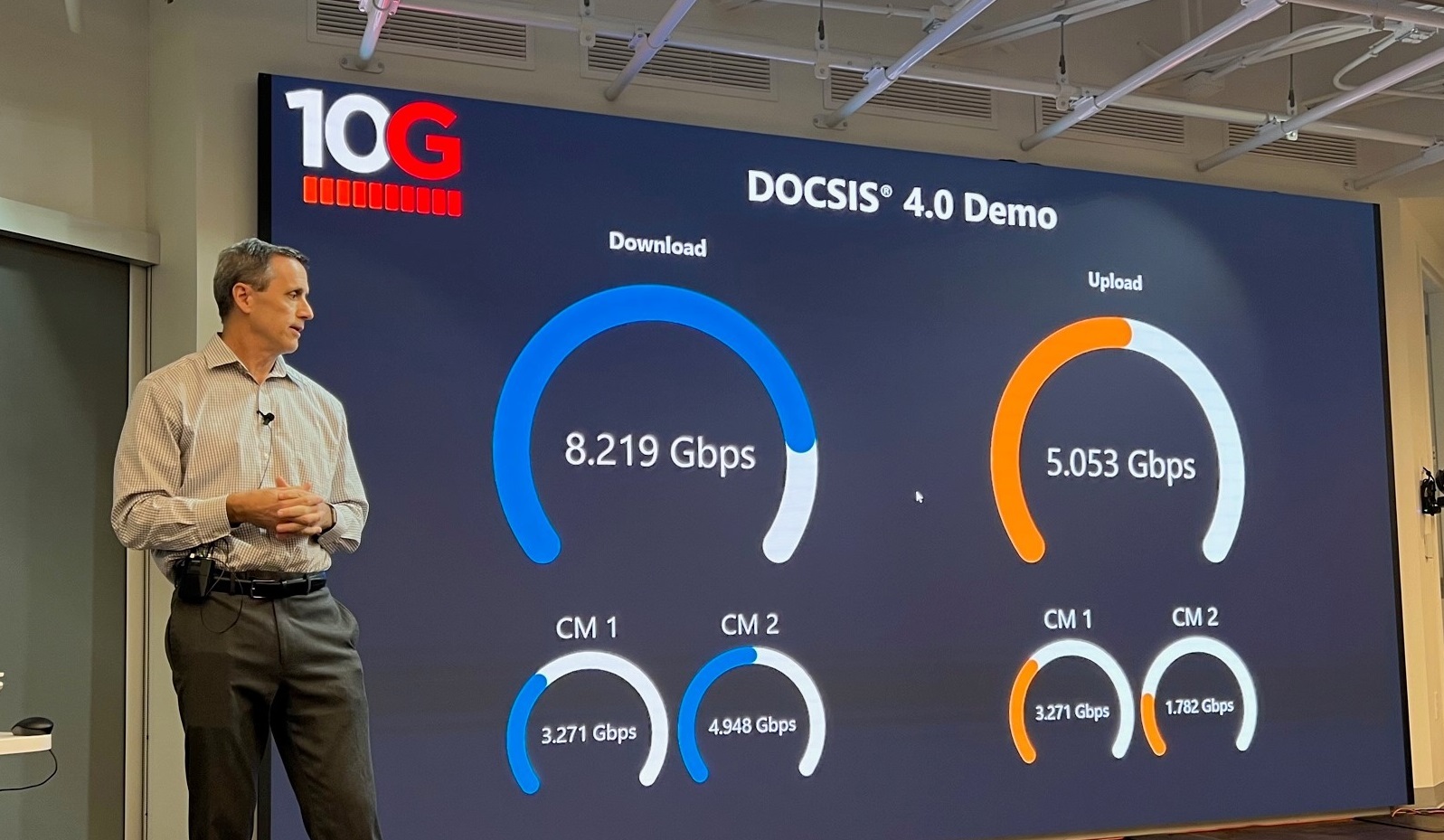 "These are dynamically allocated blocks of upstream and downstream [spectrum]," Howald added. "You can look at that spectrum as a snapshot in time."

Though the FDX demos focused on N+0, Comcast said it's making progress with an FDX amplifier that targets architectures up to N+6. Light Reading will have more detail about that project in an upcoming story.

But Howald said that the operator is confident it will be able to deploy FDX in today's HFC plant already built to 1GHz or 1.2GHz while also keeping existing coax and passive devices in place.

Comcast also expanded on its vision for DAA in another demo involving a DOCSIS 3.1 remote PHY node configured for a "high-split" upstream upgrade for HFC on its new XB8 D3.1 gateway, along with a remote OLT implementation for FTTP.

"Once you have Ethernet end points, you can put any last mile at the end of that," he said, noting that the underlying platform uses several of the same elements, including operational cores, provisioning and software, regardless of the access technology. "It's all coming from the same hardware platform, the same software platform, delivering the same multi-Gig, symmetric service capability," Nafshi said.

While today's demo of this centered on a DOCSIS 3.1 RPD, tomorrow's will involve a D4.0-powered FDX RPD, he added.

Though the talk around DOCSIS 4.0 and 10G tends to focus on speeds and feeds, network reliability is another focus. Here, Comcast showed a relatively new system for DAA that's designed to receive and monitor real-time data from the entire network ecosystem, enabling the operator to rapidly identify issues such as fiber cuts. 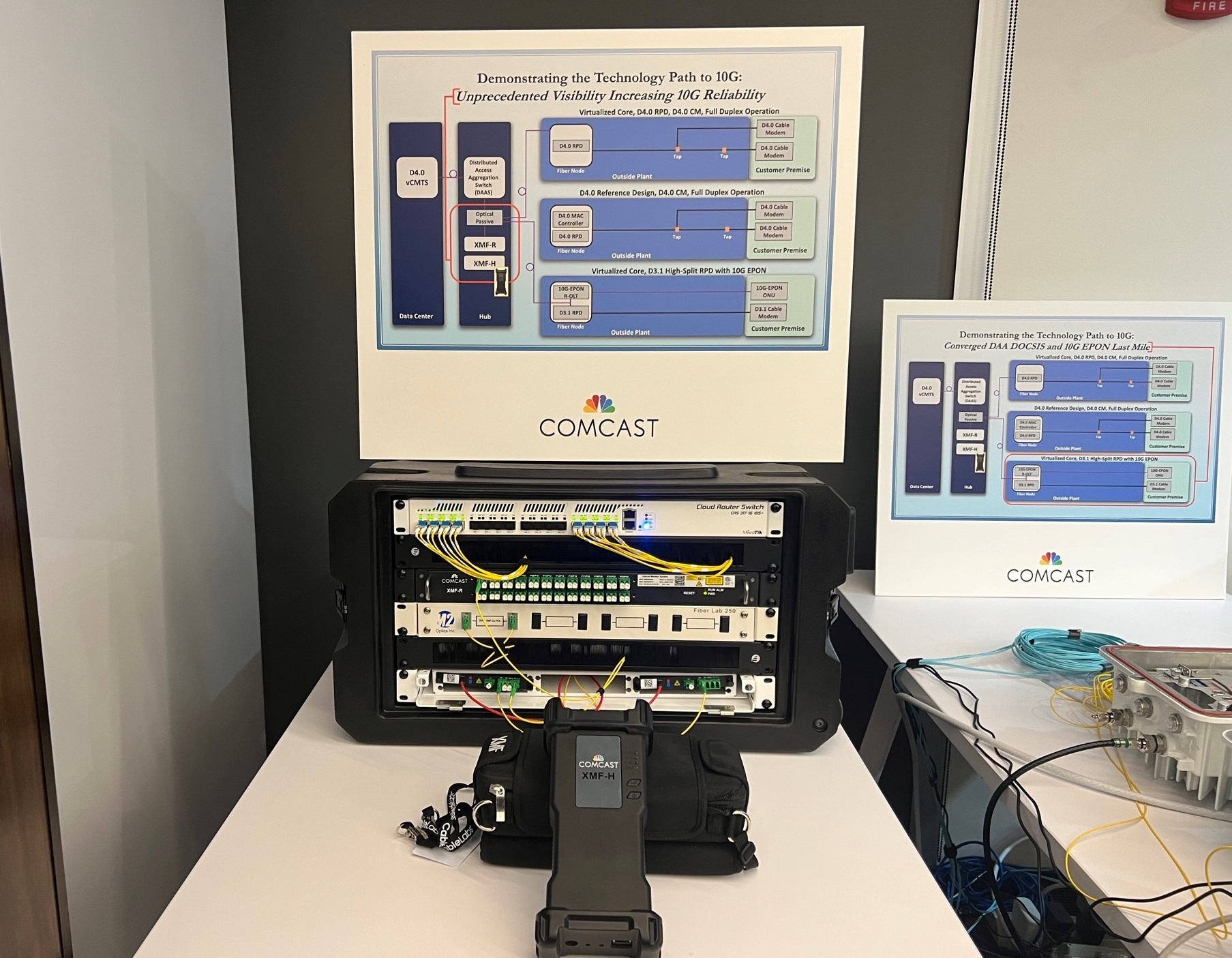 That kind of visibility allows Comcast to pinpoint a problem, dispatch the right technician out to fix it and use that same data to keep customers apprised of the situation, he said.

"This is a revolutionary capability that we are getting on our path to 10G," Nafshi said. "Multiple gigs are great  but we're able to shave hours of outages by relying on real-time telemetry."