PHILADELPHIA – SCTE CABLE-TEC EXPO 2022 – Illustrating advancements on the DOCSIS 4.0 front, Charter Communications this week is demonstrating a deployment scenario that enables the operator to bring symmetrical, multi-gigabit speeds across the vast majority of its hybrid fiber/coax (HFC).

The private demo shows DOCSIS 4.0-based traffic running on a network equipped with a cascade of six 1.8GHz amplifiers between the node and the home (or "N+6" in industry lingo) that pumped out speeds of 8.3 Gbit/s downstream and in the range of 5.3 Gbit/s to 5.5 Gbit/s in the upstream. 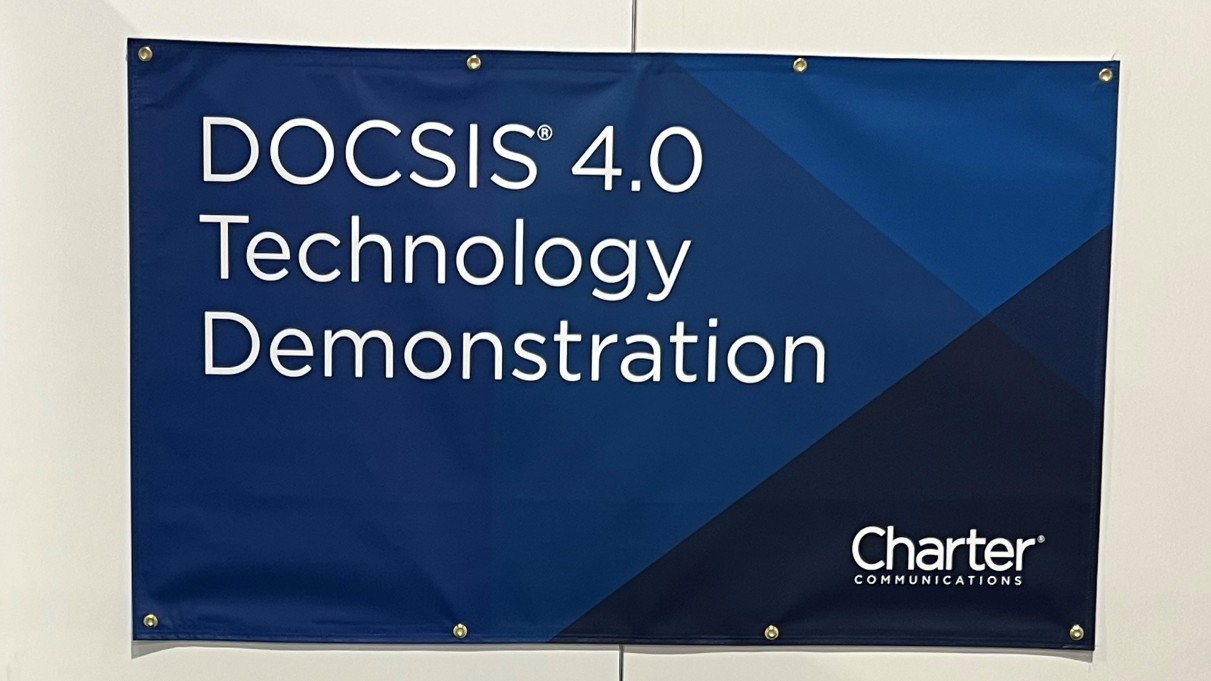 Charter didn't allow photos to be taken of its private demo this week, but did OK a shot of the banner that welcomed visitors to the booth.
(Source: Jeff Baumgartner/Light Reading)

That performance compared to the 8.9 Gbit/s down and 6.3 Gbit/s upstream that Charter showed off in April in a DOCSIS 4.0 demo based on an N+4 setup held at Colorado-based CableLabs.

This week's demo effectively showed that network performance was reduced by about 500 Mbit/s up and down when two additional amplifiers are added to a cascade. However, officials stressed that performance in an N+6 scenario is expected to get a boost and reach N+4-like levels with production of 1.8GHz amplifiers, the use of the Profile Management Application (PMA), a technique that dynamically takes advantage of the best possible modulation for each frequency/channel in the cable spectrum, and other optimizations.

Though N+6 would enable Charter to bring D4.0 capabilities to the vast majority of its HFC network, there's nothing that would prevent the operator from deploying it with more than six amplifiers between the home and the node. The tradeoff is that performance would drop a bit on portions of the plant served by those additional amplifiers.

A leap forward for FDD for DOCSIS 4.0

Charter's demo represents the Frequency Division Duplexing (FDD) option for DOCSIS 4.0, which envisions a plant built to 1.8GHz while keeping downstream and upstream running in separate, dedicated spectrum. For this week's demo, Charter showed a network built to 1.8GHz and a split utilizing a 5MHz-684MHz swath of spectrum for the upstream.

Charter said timing on field trials is still to be determined, but officials noted that next steps will center on further developments of the underlying system software, more testing and, ultimately, product/system certification.

This week's demo was a clear leap forward for the FDD option for DOCSIS 4.0. Meanwhile, Comcast is also making gains with the Full Duplex DOCSIS (FDX) version of D4.0 that envisions plant built to 1.2GHz and the use of an FDX band that allows upstream and downstream traffic to occupy the same block of spectrum.

Comcast this week touted the successful test of an FDX Amplifier, a critical component that will put the operator in position to support DOCSIS 4.0 across most of its HFC network.